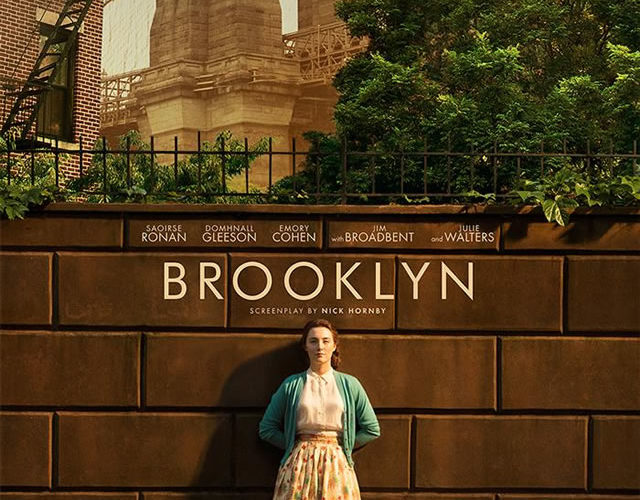 Presented with the tale of an Irish immigrant, one would perhaps expect a dreary and brutal film about the hardships of moving to America. In a way, John Crowley‘s Brooklyn is that movie, but, really, it’s so much more. While the Nick Hornby-scripted adaptation isn’t without its tough drama, Crowley’s picture is also full of kindness and laughs.

In the 1950s, Eilis Lacey (Saoirse Ronan) is moving to America, thanks to her wonderful sister (Fiona Glascott). Eilis leaves her sister, mother, and the small shop she hates working at to go to Brooklyn, where a job and home has been set up for her. Initially, she’s isolated and alone in her new home. She’s not particularly good at her job and doesn’t get along well with her housemates. Her feelings towards the city soon change when she meets Tony (Emory Cohen), who’s basically a total dreamboat with no flaws to speak of. Tony quickly falls for Eilis, and even his Italian parents are smitten by her sweetness. Soon after she falls in love with America and Tony, tragedy strikes and she must return to her small Irish town. Ultimately she’ll have to choose between two homes and two men, the other suitor played by Domhnall Gleeson.

Thankfully, choosing which man to be with does not consume Eilis’ identity or arc. The two men only amplify  her conflict: choosing between two places she loves for different reasons. Hornby doesn’t make the decision easy, either. Both countries and men have plenty to offer. Sure, Tony and Jim (Gleeson) are almost flawless men, which sounds more like a fantasy than drama, but they’re actually refreshing characters in that regard. Well-intentioned, kindhearted, and great characters are rare, making them feel human is even rarer, and Gleeson and Cohen deserve credit for making that happen.

As for Ronan, this is perhaps her best work to date. The way she plays Eilis’ transformation from the beginning to end is completely convincing, moving, and beautiful. Brooklyn opens with a girl and ends with a woman. The 20-year-old Ronan is young and has an even younger face, but she sells the confidence and growth we later see in Eilis. It’s the kind of performance that sneaks up on an audience. Hornby’s elegant script and Crowley’s subtle direction — which knows exactly when to use a close-up — assist Ronan in delivering a high-caliber performance and fully-realized character.

Some of the storytelling is a tad calculating. Not only do the final minutes hinge slightly on a huge coincidence, but once Eilis’ life begins to improve in America, it’s obvious bad news will quickly follow. With that said, that’s only a pair of minor problems in a script that gets so much right. John Crowley’s Brooklyn is a top-notch drama that packs an emotional wallop.

Brooklyn premiered at Sundance Film Festival and will be released on November 4th by Fox Searchlight.