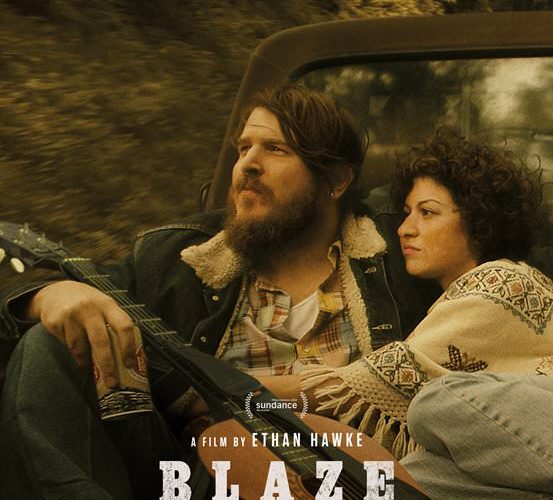 Sundance Review: ‘BLAZE’ is a Soulful Ode to an Interesting, Frustrating Musician

Not unlike its main subject, Ethan Hawke’s BLAZE is likeable, long-winded and a little all over the place. Starring musician Ben Dickey as the titular Blaze Foley, this indie biopic feels like a natural follow-up to Hawke’s last directorial effort, Seymour: An Introduction. That documentary examined the life of Seymour Bernstein, a piano teacher with wise life lessons as curated by failure and regret. This film concerns Foley, an Arkansas-born but Texas-raised singer-songwriter who was killed at the young age of 39. Both are ultimately optimistic, though Hawke does well in finding the sour with the sweet.

Beginning at the end, a radio DJ (Hawke, in a cameo) speaks to Townes Van Zandt (Charlie Sexton) and a fellow friend/musician (Josh Hamilton) about Blaze. From here, the film jumps from moment to moment with a confident fluidity. Never linear, always moving. The core relationship quickly reveals itself to be between Blaze and aspiring actress Sybil Rosen (Alia Shawkat). The real-life Rosen co-wrote the screenplay with Hawke, adapted from her memoir, and the tortured love between the two artists reads extremely well on screen.

As if you needed another reason to love Shawkat, here she is elevating every single scene she’s in. The young actress exudes such warmth, such hope, and such heartbreak as Sybil does her damndest to navigate the journey with Blaze, an artist with immense talent but an urge to disrupt. The couple fall in love while living in a cabin in the woods, provided by Wyatt Russell in a small role. This blissful period is interrupted by Sybil’s urging of Blaze to try and make something of his music. Sadly, as success trickles in, fresh problems percolate. Punctuated by high drama but fueled by small interactions, we watch Blaze achieve all he’s meant to then burn it down just as quickly.

Hawke is clearly fascinated with the artistic process and the sacrifices inherent to that kind of life. Having been an actor since childhood, it’s hard not to acknowledge the connective tissue between the actor-writer-director and his subject. Watching Dickey perform as Foley, one is easily enraptured by the organic cinematography by Steve Cosens. Languid in its pace and over-abundant in its storytelling, the film runs about twenty minutes too long, thought it’s a softer criticism than it may read.

This is an interesting, frustrating man to focus on, all the way up to his muddled end. That Hawke’s film will introduce a new audience to his music and soulful tenure feels like its own victory.

BLAZE premiered at the 2018 Sundance Film Festival and opens on August 17.