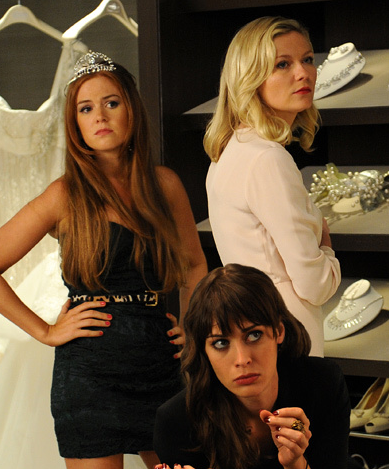 In Leslye Headland’s debut feature film Bachelorette, the playwright-turned-filmmaker takes a comedic premise and adds an edgy twist of serious substantive issues. Its a delicate balancing act that in the wrong hands could be completely borked. Yet the first-time filmmaker is able to deftly capture a sense of camaraderie between three different female characters, none of which are perfect or cookie-cutter representations typically seen in romantic comedies. Instead there is an unabashed realness to the way the characters act while also hitting the comedic high notes. It’s no easy feat and despite a few uneven moments in tone, Bachelorette delivers a darker comedy experience that isn’t afraid of shattering your preconceived notions of the sometimes tepid genre.

The story centers around a group of four women, one of which has just announced her plans to get married. The unlikely bride is Becky, played by Rebel Wilson who you may recognize from another popular movie about bridesmaids. However the two films couldn’t be more different in terms of their approach on the subject, so don’t expect this to play like a sequel despite the inevitable comparisons. Becky’s three BFFs consist of the prickly and uptight Regan (Kirsten Dunst), the cocaine fueled rebel Gena (Lizzy Caplan) and the ditzy airhead Katie (Isla Fisher). After reuniting on the night before the wedding, the girls jealously of Becky and their desire to party hard leads them down a wormhole of strippers, drugs, alcohol and wedding dresses. Bachelorette doesn’t pander to its audience and that’s it’s biggest strength, it shows people in a rawness that is rare for this type of film. The dialogue is sharp and witty with great one-liners scattered throughout. One scene in particular where Gena discusses her theory on oral sex to a stranger on airplane is particularly hilarious and had the audience in stitches. The secondary male characters played by James Marsden, Adam Scott and Kyle Bornheimer all do a great job of giving each female a good foil, while not being overly stereotypical and cliché. The balancing of each narrative thread is concise and easy to follow, giving the multi-pronged plot a good sense of momentum as it builds to its conclusion.

Some early reactions to the film faulted it for having overly negative characters or characters that are hard to relate to. This couldn’t be farther from the truth in the sense that Headland has chosen to focus on the darker side of our human psyche. It also gives her the freedom to address serious issues like obesity, bulimia, drug addiction and suicide in a surprisingly mature fashion. This combination of clever scenarios, witty banter and serious subtext elevates Bachelorette beyond the standard limitations of romantic comedy and provides a headstrong debut for a playwright/filmmaker with an undeniably strong voice for the 90s generation.