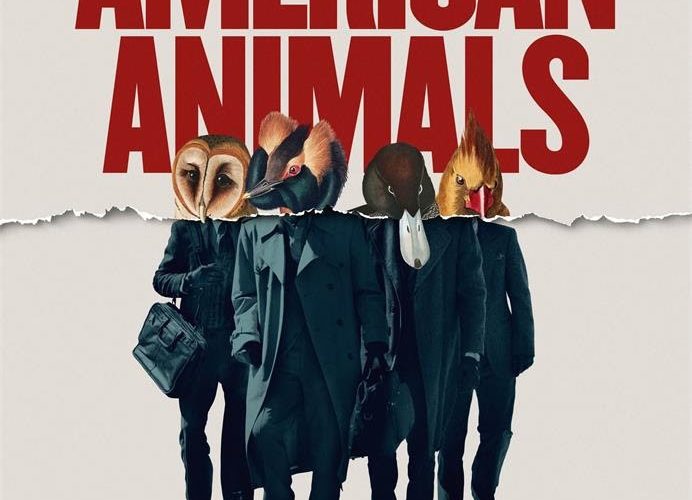 The rich genre of crime film in which dumbasses get themselves in way over their heads has a proud new entry with American Animals. Though premiering as part of Sundance’s U.S. Dramatic Competition, I’d strenuously argue that it is in fact a documentary that happens to be 90% reenactment. Hell, the movie itself even states in the opening chyron that it is a true story, not based on one. The real figures involved not only provide commentary but also shape the film itself, as conflicting testimonies will change a scene’s location or what a certain person is wearing. The conflict between differing points of view and retrospective perspective express the movie’s themes of shaping one’s reality by acting as though you’re in a different story than the one you think you’re living.

In this case, Spencer Reinhard (played in reenactments by Barry Keoghan) and Warren Lipka (Evan Peters), bored with their lives as students at Transylvania University in Kentucky, decided to embrace a different destiny by pulling off a major art theft. Seeing that the rare books in the university library had negligible protections, the young men formed a plan to steal them, eventually enlisting the aid of “black-hearted” nerd Eric (Jared Abrahamson) and jock Chas (Blake Jenner). Acting mainly on the “instruction” of various Hollywood heist movies, they half-jokingly, half-seriously goaded themselves into action, everything in good fun right up until the time came for actual crimes and violence and reality came crashing back in on the fantasy.

The movie shapeshifts as it moves between the reckless stupidity of the men in the past and their interviews in the present, in which they are at turns rueful and self-justifying. Even the most ridiculous, seemingly unlikely series of events appears inevitable in retrospect, and the feeling of inexorably being drawn to cross a line haunts the movie, particularly in Keoghan’s performance as the increasingly doubt-filled Spencer. The dark fact that none of the men could probably concretely articulate why they did this festers at its core, the name alluding to the part of our natures that compels us into irrationality.

Writer/director Bart Layton, who explored similar territory around the stories we tell ourselves in 2012’s The Imposter, again proves skilled at merging fact and fiction. Here he carries it even further, culminating in a scene in which the real Reinhard watches his younger/fictionalized counterpart drive by on his way to his doom. Beyond that, American Animals is a legitimately exciting, funny, suspenseful, and at one point deeply upsetting crime film, ably demonstrating a command of genre trappings in service of a narrative about people warped by those very clichés. I can easily see this mode of documentary becoming insufferable in less clever hands, but for now, I fully enjoy it.

American Animals premiered at the Sundance Film Festival and opens on June 1.