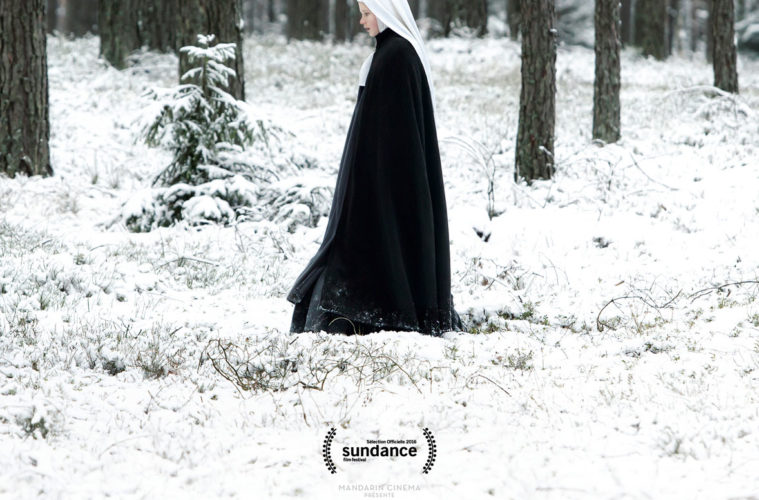 Captured on cinema since it commenced, if a filmmaker doesn’t find a new angle in which tell the horrors of World War II, then it can perhaps seem like a futile effort. Agnus Dei, the latest film from Coco Before Chanel director Anne Fontaine, digs up such an example of a compelling, true story from Philippe Maynial. Its title, translated as Lamb of God from its Latin origin, most commonly refers to the sacrificial giving that Jesus offers. However, specifically in the Old Testament, it can refer to a person who succumbs to the punishment of sins without willing to do so, which is clearly where Fontaine more specifically draws from.

We begin in December 1945, a few months after World War II ended, and its effects are perhaps being most felt in a secluded convent outside of Warsaw, Poland. It’s there where an outfit of Soviet soldiers raped the nuns during the war, leaving them all traumatized and questioning their faith, and some pregnant. Mathilde (Lou de Laâge, who was equally enthralling in Mélanie Laurent’s overlooked Breathe last year) is a French doctor working for the Red Cross in the city. After some pleading from one of the nuns, who secretly sets out from her convent, Mathilde agrees to help the women with their respective pregnancies all while trying to hide the new commitment from her boss and love interest (Vincent Macaigne).

Backed by Fontaine, Sabrina B. Karine, Pascal Bonitzer, and Alice Vial‘s perfectly engineered script — perhaps too much so — the nuns each grapple with their situation in varying ways. While one wishes the prominent nuns more distinctly defined, their shame and questions of belief ring true. “Faith is 24 hours a day of doubt and one minute of hope,” one says to Mathilde. When the young atheist nurse can’t comprehend their guilt that they will go to hell for what happened to them, a nun counters, “It’s easy for non-believers to talk of heaven.”

Convent head Mother Superior (Agata Kulesza, who has her quota of post-WWII features after Ida) is at first appalled by Mathilde or anyone else knowing the situation, for fear they will be banished from their religious duties. She then helps the nuns — who believe merely touching is a sin — to understand how Mathilde is there to help. When it comes to her own dilemma and refusal for help, Mathilde questions her if pride is a sin. This complex inner quarrel of the soul in deciding if one should follow their faith after the ultimate violation is at the center of Agnus Dei, and Fontaine handles it with grace.

Cinematographer Caroline Champeti‘s austere, patient approach brings a soft light to the thematic darkness, reverently capturing the nuns in their situation as well as the beauty of the outside world. Despite an ending that is far too obvious and tidy, Agnus Dei is a moving drama about the struggle to keep one’s faith in the most difficult of situations. Also working as an allegory for humanity’s enduring difficulty to stay true to one’s ideals when a quandary is thrown in the mix, Agnus Dei is a compelling deconstruction of how to cope and rebuild.

The Innocents premiered at the 2016 Sundance Film Festival and opens on July 1.