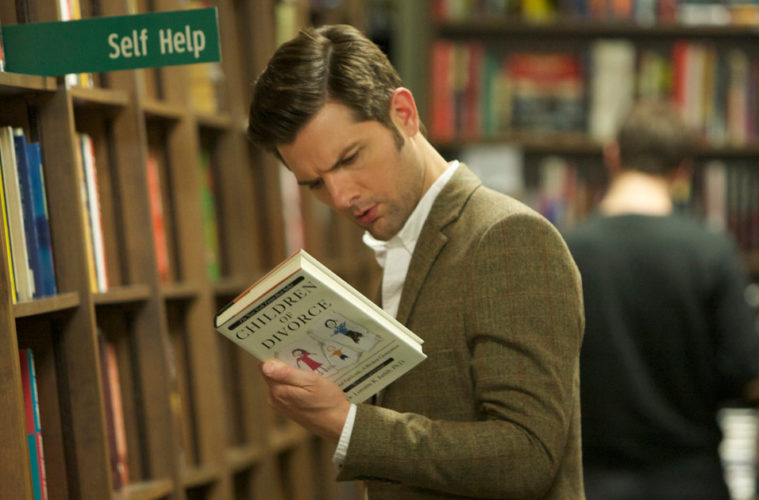 Working with a subject matter that at least half of the country can directly relate to, A.C.O.D. (a.k.a. Adult Children of Divorce), starring Adam Scott, works firstly as a rather broad comedy, and secondly as a just-smart-enough comment on how we never fully forget the ones we love/loved.

Scott plays Carter, a successful restaurateur who’s done well mostly avoiding his mother (Catherine O’Hara) and father (Richard Jenkins). They have been divorced for years and hate each other to the bone. Unfortunately, when his younger brother (Clark Duke) decides to get married, Carter is forced to play middleman to his estranged parents once again in order to get them both to the wedding. In the crossfire, Carter also learns that, as a child, he was a psychological subject in a best-selling book on divorce.

What follows is, for the most part, silly stuff punctuated with honest moments of observation. Directed by first-timer Stu Zicherman, A.C.O.D. succeeds thanks in large part to an intelligent screenplay and an all-star cast, which also includes Mary Elizabeth Winstead, Jessica Alba, Amy Poehler and Jane Lynch. Zicherman’s lack of experience behind the camera shows, as the pacing and general tone of the film slips and slides throughout. Sometimes we are given a slapstick farce, other times a heartfelt dramedy. Scott is tasked with holding these two halves together, resulting in a performance that is at once impressive and noticeably strained. While the rest of the cast is allowed to goof off and flex their comedy chops (Duke and Jenkins both do great work in this regard), Scott serves as the anchor. One must continue to hope for the talented actor to once again broaden his horizon with another daring performance, a la The Vicious Kind.

Though O’Hara and Winstead add a dose of charm and comedy to the proceedings, they are very much on the sidelines here, Zicherman focusing primarily on the dramatic trio of father-son-son. The film is at its strongest when we watch Carter slowly morph into his father, against all of his better judgments.

It’s a raw emotional narrative employed in A.C.O.D. that certainly adds a measure of depth to what’s going on. And while the third act employs some overly-ridiculous plot-points in order to wring out some broad, somewhat lazy, comedy, this emotional arc survives to the end, adding a silver lining to a very nice final scene.

Right in line with something like I Love You, Man, A.C.O.D. plays like a small, smart studio comedy that has the potential to hit with a bigger-than-expected crowd, hopefully further launching the career of Mr. Scott, an actor who can play at the top of any genre available.