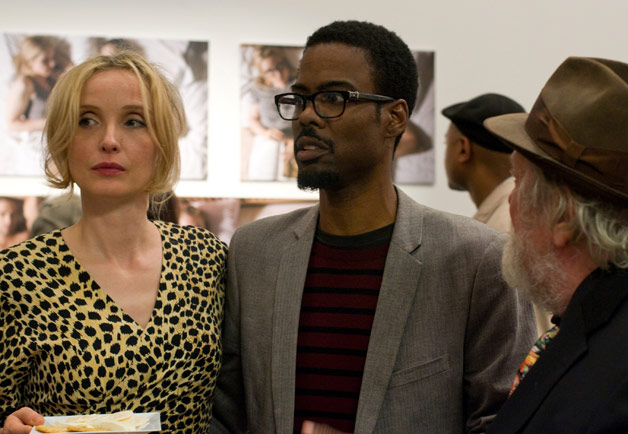 Picking up quite a few years down the road from 2 Days In Paris, Marion (Julie Delpy) has left Jack (Adam Goldberg) and started a life with Mingus (Chris Rock) and their previous children in 2 Days in New York. With her art gallery exhibit coming up and her father, sister and unexpected guest flying in from France, Delpy’s life is about to become even more frantic as she entertains while balancing her own hectic family life.

Serving as writer, director, producer and star again here, Delpy returns with her witty, fast-paced dialogue as she examines more language-barrier, social situation comedy. Following a well-executed flashback showing the catalyst for Mingus and Marion’s relationship, things get moving pretty fast as one would expect in a new film from Delpy. Her family arrives, including the returning father (the adorable Albert Delpy, also real-life dad to Julie), perpetually aroused sister (Alexia Landeau) and her offbeat boyfriend (Alexandre Nahon). Rock does more than just his comedic shtick, serving as the composed, reasonable center for the craziness that surrounds him. While much of the laughs are derived from his perplexed reaction as Marion’s father gets a little to friendly without any sort of context or the boyfriend that tagged along invites a drug dealer into his house to support his marijuana addiction. Although repetitive and familiar, Delpy keeps these familial strains engaging with her snappy style.

A particularly funny sequence involves Marion lying to another apartment tenant in order to prevent eviction, after her family smoked weed in the elevator with said tenant. Falsely revealing she has a brain tumor, this lie carries through in the next scene as the tenant’s doctor husband (Dylan Baker comes to the apartment to offer help. Mingus realizes her lie, making her pay for it as the doctor is invited in for coffee. As he attempts to analyze Marion’s condition the doctor is distracted by her sister’s naked rear, parading around the apartment. Tying all of these elements together and keeping her characters consistent is a trait missing in many adult-themed dramas, but one that Delpy seems to pull off effortlessly.

Things do go slightly off the rails by the last act, as an odd subplot featuring a cheap cameo feels out of place, as does a poorly put-together climax involving unnecessary peril. Mingus’ fascination with a cardboard cut-out of Barack Obama also overextends its welcome, as he preps for an imaginary interview he will likely never have during his day job as radio show host. With all these diversions, 2 Days In New York is still a consistently funny intellectual examination of ignoring cultural norms. Paris and New York don’t provide the same one-two punch found in Before Sunrise/Sunset, but with so many others attempting to ape that style to little effect, it is refreshing when someone gets it right.