Steven Yeun on the Mysteries of ‘Burning,’ Korean Christianity, Nihilism, and ‘RoboCop’ 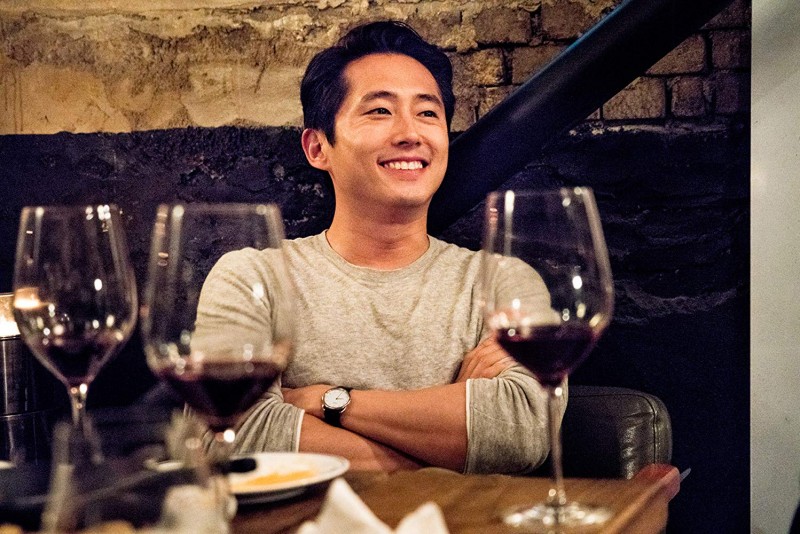 Burning, director Lee Chang-dong’s long-awaited return to the cinema, is brimming with the Rashomon effect. The film will have you questioning what you see, and what you think you know. Many facts appear as objective in the film to justify a personal reading of the narrative. But to reduce Burning to its connective tissue is a disservice to the experience of shutting up, letting go, and enjoying the new work from the master filmmaker and his newest collaborator, Steven Yeun.

Yeun’s imprint is expanding beyond The Walking Dead into films like Okja, Sorry to Bother You, and now Burning. Through one lens, Yeun plays Ben, the cosmopolitan who burns down greenhouses for the thrill of it. Another take on Ben could be the sex-trafficking globalist. There’s more than a binary choice to understand Ben, like all people and all characters. However you interpret him, Ben is a nihilist with fuzzy motives. He’s creepily at home anywhere he is and is always the consummate host.

We spoke with Yeun about working with director Lee, growing up in a Korean Christian family, and existing in a place between motives and narratives to understand the world around you.

The Film Stage: At the New York Film Festival Q&A you said having a son sent you on an existential crisis and Burning helped you through it. Will you elaborate on what happened?

Steven Yeun: It was a lot of things converging at the same time in my life: leaving a show that I’d been on for a long time, becoming a father, and just being 30-something was all converging on me in this way… I think existential crisis is a little too intense. It’s closer to that feeling of angst or re-accepting who you are, what you are attempting to do on this planet. In that moment I wasn’t necessarily lost but kind of treading. I remember Burning coming along and the experience rationalized a lot of the feelings that I was having. It allowed me to explore them.

How did you come about working with director Lee?

I was in London and I mentioned that I wanted to work with him during the press conference of Okja, which I never expected to turn into anything. I got a call from director Bong in the middle of the night saying director Lee wanted to meet me and I was fortunately going to Korea anyhow the next day. I ended up meeting him in Korea to talk about this project and we started a couple of months later, last fall.

I have a theory that the movie is a story Jong-su (Ah-In Yoo) wrote.

I think that’s a very applicable take on the film. You’re getting into the idea of the mysteriousness of this world. Our stories and perceptions of what we think is correct, wrong or right; the way we see the world is uniquely our own. We build our own narratives to fit whatever our mind wills itself to be. In the first viewing, you’re looking at Burning through the lens of Jong-su, and so a lot of these little keys point to a specific understanding of what you think Ben is. In the second viewing you’re able to take those down and objectively look at the facts and question what you thought it was. You are being taken through Jong-su’s point of view. Is he writing it? Who knows? Maybe.

Ben is the perfect example of someone who has touched and experienced individualism while he lives in a collectivist society. There’s this freeness to him, this ability to move about where he pleases. A consistency to his being wherever he is. Whereas a lot of us, even in America, submit ourselves to code-switching based on whatever scenario you’re in. For me it’s always been about balance and East and West are the poles.

Everytime a guest is at Ben’s house they wear slippers. Is it common in South Korean households to have enough slippers on hand for guests?

Yes. [Laughs.] Or people wear their socks. No shoes in the house, that’s rule number one. Have you been in an Asian person’s house? No shoes in my house, my mom will kill you. Where the Western part of me comes in is if I need to quickly grab something I’ll run through the house in my shoes. I’m not going to knock on Western values, but, I think at the least everyone would benefit if they didn’t bring their shoes into the house.

I have to agree.

In your GQ profile you talk about growing up in a Korean Christian household. The only recent depiction of that experience in popular culture I can recall is Andrew Ahn’s movie Spa Night. Have you seen it? How true is the faith element in that movie to your experience?

I have! With Korean Christians you’re talking about two sets of collectivist ideas. Christianity can lead itself to have this monolithic idea of what a general Christian should be and how they should behave. Being Korean also has that collectivist nature of submitting yourself to what the whole wants. You have a double dose of that. And if you’re like David in Spa Night and wrestling with your sexuality, that’s sometimes a hindrance because you have a lot of guilt.

How have you been able to reconcile your experience as a kid in the church and where you’re at now as you re-engage it?

I think it’s this healthy questioning of the choices we make in our lives. You’re growing up and your parents work out a safe space for you or instill some of their own values in you. There’s this sense when you look back in the rearview, you ask yourself how many of my choices are because people told me what they were supposed to be and how many of my choices are truly what I feel? I’ve been able to healthily unpack these things and rebuild them for myself. Sometimes they’ve remained consistent but have a deeper understanding of purposefulness.

Director Lee left much of your character’s motivation up to you to internalize and keep secret. Can you talk about how you came to those motives?

I tried to build the character out from his core, basic philosophy. In doing so you build on that through his understanding of nihilism and acceptance of that idea. You read something like The Pillowman, where you think maybe he’s altruistic in his nihilism, maybe he’s helping these women. Maybe he even thinks while he’s doing something nefarious to the outside world it’s actually a benefit to these women in the end. Whatever weird place this person is in, or not, those are things I built upon. Through my journey in the process of this character, my decisions changed as we went. Sometimes the choices exist on this paper-thin line of I made the choice, but also that choice is teetering on the edge of both things.

Did you ever feel your choices didn’t make a difference when it came down to performing, since you were the only one who knew Ben’s motives?

We were trying to maintain the in-betweenness and mysteriousness of the character. Director Lee and I would choose certain moments to play toward a specific way, depending on how we wanted the perception of Ben to serve the narrative. There were moments where he would direct me to push it a little further in one direction, and in another scene in a different direction. We found a natural ebb and flow.

Why did RoboCop land on your Criterion top 10 list?

It’s a story about capitalism. What unchecked power can do when you can justify every decision to be about sales or money. It gets this perverted sense of itself where you’re building crazy things like a massive robot to keep people in check. That era of Verhoeven, Carpenter, when I watched their stuff when I was a kid I thought I was just watching robots fight each other. You missed all the adult themes and ideas it’s trying to tell you about the way our world works.

A lot of times people try to distill a movie down to its basic function or how they perceive its basic function. With Burning there’s this thriller aspect that’s tied to it which I agree with. But sometimes there’s this penchant for people to get obsessed with what the plot is attempting to say and what the plot is doing. Did Ben do these things or did he not? It becomes this battle in your mind of trying to understand something very concrete but the film is really trying to talk about the in-between things. The things you can’t see. The feelings and mysteries of the world that we don’t understand. You have to let go to those feelings and let go to that idea for the film to process fully.

Burning is now in limited release and will expand in the coming weeks. See showtimes here.