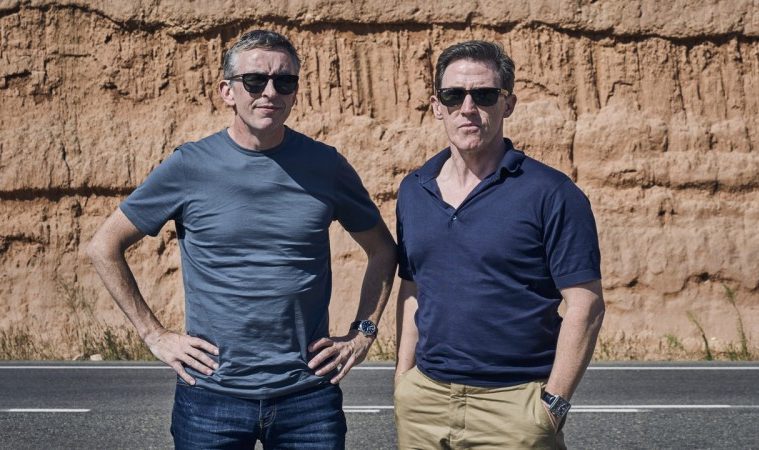 Steve Coogan and Rob Brydon Continue the Adventure in U.S. Trailer for ‘The Trip to Spain’

Averting the bigger is better approach that plagues most franchises, The Trip series is attuned to life’s simple pleasures: cuisine, comedy, and companionship. For Michael Winterbottom, Steve Coogan, and Rob Brydon, their third outing, The Trip to Spain, refreshingly doesn’t stray from the charismatic formula that has resulted in perhaps the most delightful series of films this decade. Ahead of a release this August, the first full trailer has now arrived.

“In reviewing one of The Trip films, the base criteria is perhaps different than that for any other feature. Are there laughs? Does the food look delectable? Are the vistas magnificent?,” I said after its Tribeca premiere. “Indeed, The Trip to Spain features hysterical impressions of Mick Jagger, Michael Caine, John Hurt, Robert De Niro, Marlon Brando, and half the James Bond actors over exquisitely-presented plates of chorizo, anchovies, flan, and mussels, all while surveying stunning rolling hills and coastal seascapes. For fans of the series, The Trip to Spain gives one a wholehearted meal of all they could possibly desire.”

After jaunts through northern England and Italy, Steve Coogan and Rob Brydon embark on another deliciously deadpan culinary road trip. This time around, the guys head to Spain to sample the best of the country’s gastronomic offerings in between rounds of their hilariously off-the-cuff banter. Over plates of pintxos and paella, the pair exchange barbs and their patented celebrity impressions, as well as more serious reflections on what it means to settle into middle age. As always, the locales are breathtaking, the cuisine to die for, and the humor delightfully devilish.

The Trip to Spain opens on August 11.