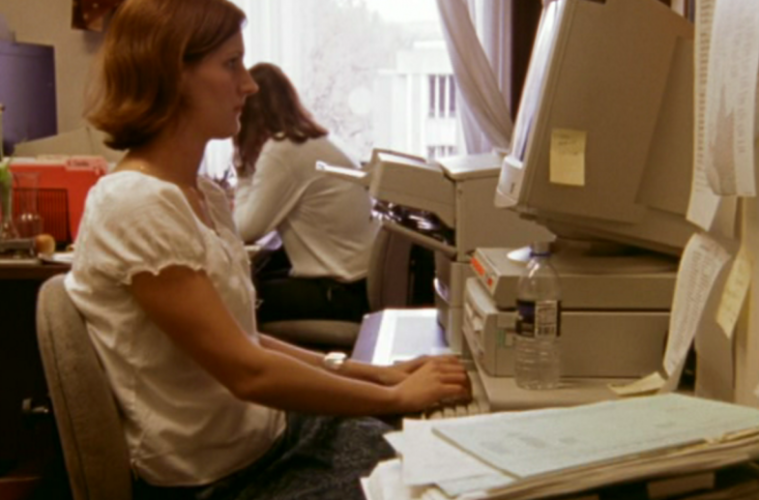 Frederick Wiseman is so acquainted with the warp and woof of the American texture that his document of the 2004 session of Idaho’s state legislature also serves as a densely layered tome on the history of democracy in modernity. State Legislature is incidentally documentary-as-synecdoche and an indirect experiment in projection. Wiseman’s choice of Idaho as subject is as banal as having an inside connection, yet it seems most fateful that one of the country’s most conservative bodies of lawmakers would act as surrogate for the whole of the American politic. The ideological extremity acts as a measuring device for the audience: to many, this represents the purest legislation in the land, while for others, this body is a scourge. The film is whatever the spectator projects onto it.

Minus a few exterior shots of the capitol building in Boise that open the film, this is a study of interiors. Scenes typically begin with a shot of door labeled with its respective department or committee, then cut to the proceedings that take place inside. Representatives and senators debate whether bills should be taken to the floor or not; citizens testify to the validity of proposed bills; lobbyists work deals with legislators on behalf of their clients. The audience plays spectator to these negotiations, each its own mini-drama in this theater of democracy. If things threaten to get claustrophobic, Wiseman locates brief respites in the lobbies where an elementary school choir performs “Swing Low, Sweet Chariot” or a local inventor demonstrates a programmable robot to onlookers or a Hispanic cultural group performs traditional song and dance.

If anything, this institutional life is defined as one of rigor and tedium. Passing bill into law is an arduous task where the minutiae of language and intent is up for debate at every meeting. It’s a portrait of a society grappling with longstanding ideologies as the world advances into unknowable terrain. So much of legislation is about anticipating the world to come by knowing where it is now. One scene shows a police officer introducing a bill that would help define the criminality of voyeurism in response to advancing technology, notably upskirt videos posted on the Internet. Another shows a man speaking about electronic waste and how best to prepare Idahoan communities to dispose of unused electronics. Access to rights of personhood are debated regarding undocumented immigrants, a debate which spills over into the lobby between a senator and a local immigrant. Wiseman patiently reveals the immediacy of these proceedings; these elected legislators shape the environments that the American people will inhabit. The future is a malleable text whose meaning is determined by specific ideologies.

Wiseman doesn’t allow the demanding work therein to be merely applauded without critique. His observational, non-interventionist style is a heavy-breathing presence throughout. And because American politics is a rhetorical organism, the passivity of the filmmaker oftentimes reads as oppositional counterpoint. So more than just a document of mere legislative activity, it’s by virtue of existence an investigation into a peculiar ideological microcosm. Idaho’s majority conservative house and senate are naturally State Legislature’s subjects. They draw their own lines, editorializing themselves; all Wiseman has to do is observe.

The silence of the observation feels damning. Its main critique lies in the false democratic notions of separation of church and state. Christian prayers open and close the legislative sessions. Appeals to confirm or strike down certain bills are made on grounds of religious integrity and not always upon their respective good or ill for society. When a legislator is shown arguing on behalf of the local citizenry it plays like a reaction shot, a rare sighting of actual representative democracy. Idahoan, and thus American, law is parsed as not belonging to the will of the people but the will of God. Wiseman is honest in how he presents the legislature as religious institution. The capitol building is a church, the legislative process a doxology.

The dialectic between them proceeds without interruption, Wiseman doing his best not to comment upon the proceedings. He demands the film be a holistic insight into the democratic process, and it succeeds. State Legislature is a definitive work of American history, defying textbook exposition of democratic endeavor by placing viewers into the trenches of lawmaking. It is made of life’s best dramas; society, livelihood, and personhood are all at stake on these stages. It’s a deeply philosophical work, as senators and representatives parse propositions and bills to their linguistic and ideological protons. Democracy is made of an unstable alchemy, determined by volatile social scientists. Watching this, it’s a wonder law exists.

Democratic process is specific, and America’s right-wing, evangelical iteration cannot be elided. With State Legislature, Frederick Wiseman mirrors the apocalyptic tone that many lawmakers and constituents invoke throughout: if America cannot separate these entities, communities will continue to suffer the hubris and grandstanding of legislators who seek to enact the will of their god upon the will of the people. This film feels like the document of a grand farce. (It clearly hasn’t been seen by enough of the American people over the last ten years.) The lobbies and hallways of the legislature are filled with diversity of compassion and voice while the chambers are occupied by the prayers of those who’d rather watch the world spin on the same as it ever has. An anti-utopia emerges from Wiseman’s dialectic that demands the system be reevaluated, overhauled, turned upside down. State Legislature is whatever is projected upon it. Frederick Wiseman’s patient observation plays like a lamentation.