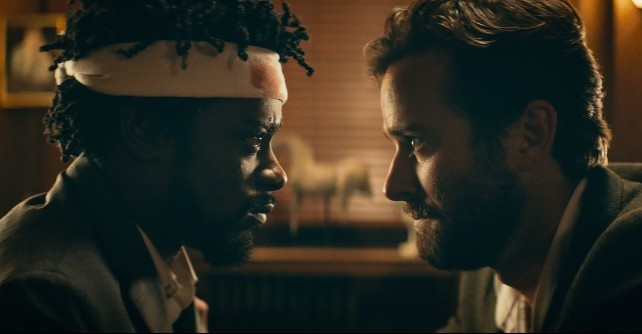 Bursting with creative energy, hip-hop artist-turned-director Boots Riley’s directorial debut Sorry to Bother You made a splash at Sundance and now the first peek has arrived ahead of a summer release. Starring Lakeith Stanfield’s character as he climbs the corporate ladder only to find Armie Hammer’s coke-snorting boss character at the top (and much stranger things best left unspoiled), it’s a satire that would make Robert Downey Sr., Michel Gondry, and Spike Lee proud.

I said in my review, “Sorry to Bother You is a bold debut–in every sense of the word–for rapper-turned-director Boots Riley. There are truly radical, thrilling ideas both in the script and on screen, and also his boldness sometimes undercuts the character- and narrative-building aspects as we jump from compelling idea to idea. Mixing the droll comedy of Office Space with the race-backed satire of Putney Swope, and adding an imaginative dash of Michel Gondry (who gets a parody shout-out in an animated bit), at least something in Sorry to Bother You will surely strike a chord with any viewer, even if it doesn’t fully cohere.”

In an alternate present-day version of Oakland, black telemarketer Cassius Green discovers a magical key to professional success – which propels him into a macabre universe.

Sorry to Bother You opens on July 6 and expands wide on July 27.