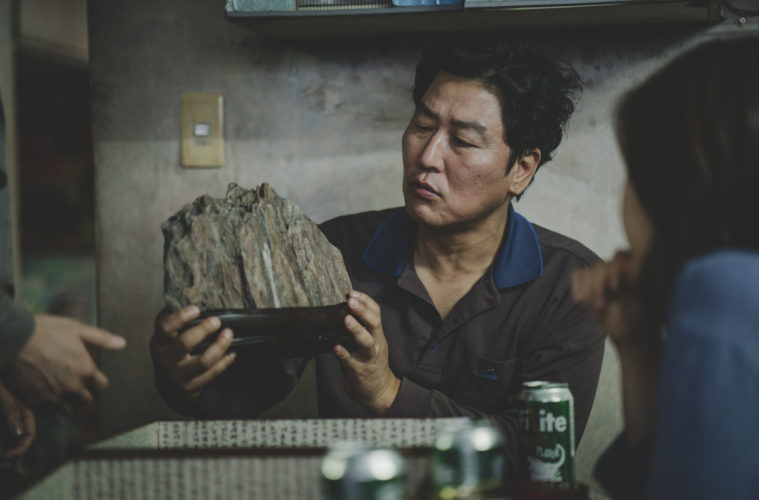 Song Kang-ho on Father Figures, Not Having a Plan, and Why ‘Parasite’ is the Culmination of Bong Joon-ho’s Career

Veteran South Korean actor Song Kang-ho carries himself with a quietly measured poise that stands in sharp contrast to the brusque and hapless working class types he’s often played throughout his illustrious career. On this unseasonably balmy mid-October morning, he’s sporting a sharp black turtleneck under an even sharper dark blue blazer—his jet-black hair perfectly gelled and coiffed to the side in the dapper likeness of a Brooks Brothers model-meets-vintage-Hollywood leading man. Sitting across from him, one immediately takes stock of Song’s distinguished presence and gracious demeanor, to say nothing of his casually intellectual manner of speaking, in which he thoughtfully and deliberately articulates himself with a conversational lyricism that’s inviting, if not a little intimidating.

Yet Song also grounds his affable regality with a humbling and generous dose of self-deprecating humor; harmonizing his unpretentiously dignified comportment with an earthly humanism that radiates through warm glints of eye contact, and infectiously beaming, toothy smiles that further accentuate his full cheeks. It is this open humility and warm humanity that shine through Song’s characters, particularly his portrayals of struggling, flailing and fallible men on the periphery of society whose lack of privilege puts them in situations that challenge their moral compass. Despite the 52-year-old’s calm and courtly off-screen confidence, time and again Song has shown his prowess in accessing the gritty and tempestuous emotional reserves needed to play such impulsive, wounded and eccentric protagonists, and he does so with bruising self-effacement and intuitively layered agility.

Such is the case with Kim Ki-taek, the disheveled and impetuous, poverty-stricken patriarch in Parasite; director Bong Joon-ho’s latest genre-bender that made waves when it won the coveted Palme d’Or at this year’s Cannes film festival. Parasite functions as an elevated extension of the director’s cinematic modus operandi, signaling yet another level of daring craft in a fifteen-year film career that’s become defined by an almost contrarian aversion to genre orthodoxy. The film tells the story of the Kim family, a lovingly close-knit, though unemployed and impoverished, clan struggling to barely make ends meet through odd jobs that include folding pizza boxes. Perpetually down on their luck, the Kims’ fortunes seem to change when Ki-taek’s son Ki-woo lands a job as an English tutor for the teenaged daughter of the wealthy Parks, an impossibly handsome family of new money acquired through the father and husband Dong-ik’s (Lee Sun-kyun) tech entrepreneurship. Perhaps unsurprisingly for a film that centers the conversation around society’s haves and have-nots, class politics serve as Parasite’s fulcrum; and they are embedded into each and every frame and line of dialogue. The less said about the film the better, though it should be noted that Song brings a haggard gregariousness to Ki-taek that injects Parasite with vibrant and earnest levity, as the Kim household’s rich solidarity provides a humorous and comforting salve to their destitute trappings and dangerous hijinks.

Here, the prolific screen actor, who in August received the 2019 Locarno Film Festival Excellence Award, discusses why Parasite marks a career-defining collaboration for him and Bong, the reason he gravitates towards everyman roles, and the existential influence actor Steve McQueen had on him.

Congrats on your Locarno Excellence Award!

Parasite marks your fourth collaboration with Mr. Bong. How has your working relationship changed over the years? In what ways, if any, was your creative dynamic in this film different than with your previous three?

If you look at Bong’s previous films like Memories of Murder, The Host, or Snowpiercer, which we worked on together, but also other films of his like Mother or Okja—if you look at them as a whole, I think Parasite is the ultimate product of these works. They represent the collective result of Bong’s aspirations. If I were to speak more specifically, and with regard to Bong’s perspective as an artist, all these views he has towards society and life that he’s thoughtfully considered and challenged throughout his career have been collected and brought together in Parasite.

Is it important for you to work on a project that has some degree of social commentary or political message? Your acting resume would suggest so.

I would say no. I don’t really particularly choose those projects, but as it turns out, I’ve appeared in these kinds of films that have a strong social message.

I read somewhere that you prefer improvisation to rehearsal, is that true? Was there any improv in Parasite? If so, what was explicitly in the script, and where did Bong give you more latitude to stray?

Actually, I don’t specifically prefer improvised performances. It’s true that those kinds of performances have a certain vitality to them, whereas in a rehearsed performance those impulsive emotions disappear. If possible, then yes, I do seek out improvisational performances, but I don’t necessarily exclusively prefer them, per se. You could say Ki-taek certainly possesses that vitality.

Speaking of, can you talk a little bit about your character and the Kim family as a whole? What do you want audiences to know about them?

I don’t see Parasite as a character-based film—rather, the desire to adapt is its most important focus. If you look at the specific events of this story, it’s true that the Kim family members are criminals, but I think their criminality really comes from a desire to adapt in society. Ultimately, the film’s primary goal is to show its take on this kind of society.

As the head of his household, Ki-taek certainly possesses the survivalist instincts of someone who must look out for the well-being of his entire family. How does this parental, or paternal, instinct differ from your Snowpiercer character Namgoong, for instance? You seem to play a lot of fathers. [Chuckles]

Yes, that’s true, but I think there’s a sharp contrast between those two films. In Snowpiercer, the character of Namgoong tries to strive for the survival of him and his daughter in an extreme environment, whereas in Parasite the father figure is not really in an extreme environment—though he tries, with difficulty, to adjust to society as well as he can.

Is it difficult navigating the different tones in a Bong film, especially with this one? How did you tackle Parasite’s different tonal and emotional registers—its absurdity, pathos, tragedy, black comedy, element of horror and satiric humor?

It’s not always easy to work with director Bong. [Laughs] As you know, the character of Ki-taek does not have a plan. The same goes for myself as well. As an actor, my principle is to never have a plan when working with Bong, and this actually helps me a lot. [Chuckles]

You’ve amassed a critically acclaimed filmography playing ordinary, working people. What draws you to these Everyman roles, and why do these characters resonate with Korean audiences the way they do?

It’s true that a lot of these characters that are suggested to me are everyday men. I don’t have a kind of fantasy visage or good-looking face to deliver audiences, but I think my characters are more familiar to Korean audiences because they’re very ordinary. If you look at director Park, who casts me in these completely opposite roles that are quite shocking, it forms an interesting contrast.

Speaking of your other collaborations, you’ve worked with a venerable slate of heavyweight Korean auteurs throughout your career. Is there a particular director whose creative and artistic sensibilities most closely align with yours?

[Breaks out laughing] I like director Bong, but I would say that directors Park [Chan-wook], Lee [Chang-dong] and Kim Jee-woon all have unique traits to them and they have different ways of using me as an actor. I can’t really say that one of them clearly aligns with me in terms of creative taste, because all of these directors have their unique charms and traits. But I do find it very interesting that these directors use me in different ways to draw out very different performances.

You’ve said in previous interviews that Steve McQueen had perhaps the most formative influence on you as an actor. Could you talk a little bit about that? How did you draw from his craft with regard to your own techniques as an artist?

Ever since my childhood I’ve really liked Steve McQueen. I’ve watched a lot of his films throughout my life, including Papillon, which is one of my favorites. I think it’s really his nonchalant coolness that I was attracted to growing up, as well as the sort of cynicism he brought to his roles. While it’s not true that I became an actor because of McQueen, I will say that he had a considerable influence on my decision to become one.

How have Korean audiences received Parasite? I imagine there was a swell of national pride following its Palme d’Or win, given that it’s the country’s first film to boast the highest Cannes honor. Awards aren’t everything, but surely that international recognition cements Korean cinema’s embrace and celebration on such a global scale?

I think a lot of people were very amicable towards this film, and I did not expect that so many would understand the deep charm it possesses. I don’t really think it’s the Palme d’Or that’s the cause of all of this, but it’s true that a lot of Korean audiences feel a certain pride towards the film’s win.

What does satire offer that other genres don’t? As an actor, what excites you about performing satire specifically?

I think there are pros and cons to all these characters I’ve played. There’s a very satirical streak to Parasite as you describe, and playing a satirical character like Ki-taek is extremely challenging and difficult. Yet at the same time there’s a certain amusement I get from those kinds of roles, whereas playing characters with a bit more reality to them—or who are more grounded in reality, I should say—may be easier, but perhaps less entertaining.

What feelings, thoughts, or reactions do you hope Parasite elicits in audiences?

I don’t think there’s a clear single way to watch this film. Every viewer has different emotions towards the dark and tragic aspects of society that are depicted in this film, as well as its entertaining factors. So I don’t really think there’s one way to watch Parasite, and everyone will have their own takeaway from a daring project like this. What I can say is, don’t come into Parasite with any expectations, or a plan.

Parasite is now in theaters.