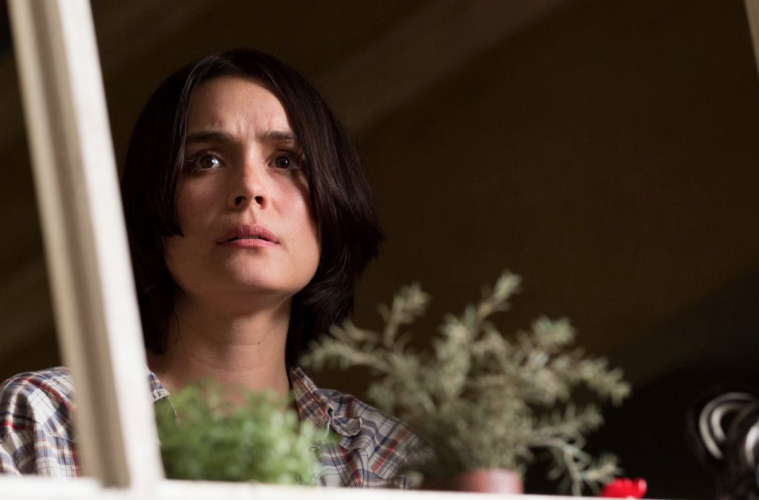 Shannyn Sossamon entered the spotlight as an actor in 2001 with Brian Helgeland‘s A Knight’s Tale. The film was and remains a delightful surprise — and it seems like the kind of original studio movie Sossamon responds more to than, say, the average romantic comedy or a movie we see every month in theaters. We’ve seen the actress in some major releases over the years, but she always tends to shine brightest in projects that aren’t the norm, such as, The Rules of Attraction, Wristcutters: A Love Story, or in her brief but pivotal role in Kiss Kiss, Bang Bang — a scene I, regretfully, did not ask her about.

Now she’s starring in Sinister 2. Directed by Ciarán Foy (Citadel), Sossamon play Courtney Collins in the film, a mother on the run with her twin boys from their abusive father. Until the end of the film, it’s just the boys acting in the horror film, while Sossamon is performing in the drama — a part of the project she responded to.

We spoke with the actress in West Hollywood at the Sinister 2 press day. Time was short, but Sossamon was in good spirits and engaged. While it’s generally best not to include smalltalk in printed interviews, I decided to keep Sossamon asking me questions. It’s a rarity, especially at a junket, for an interviewee to show interest in the interviewer. Obviously that’s not the point of a junket, but nonetheless, the curiosity Sossamon expressed was genuine and, on top of that, it’s always refreshing to go off script in interviews.

Here’s what Shannyn Sossamon had to say about making horror films, her process, and her plans to direct one day:

The Film Stage: You’ve discussed finding the making of horror films draining in the past. Why is that?

Shannyn Sossamon: They are draining because of the content. Usually you’re going through something horrifying; it’s a horror film, obviously. You’re adrenaline is up all the time. Your emotional state is either frantic, in fear, in anger, in terror, or you’re in survival mode — and what makes that extra draining is if you, as an actor, are not at the hands of a master or someone that really has a vision for what they’re doing. When I speak of them being draining or not wanting to do anymore, it’s because sometimes you feel a little alone when you’re doing them. You do think, Oh gosh, I’ve just given this all my energy, and you realize you weren’t really suited for the part or you weren’t on the same page with the person making it. When they came to me with Sinister 2 I said no. I had just done Wayward Pines — which was very high energy, playing a worried mother.

That makes sense. You don’t want to be screaming your lungs out all day for a project you’re not fully invested in.

Yeah. When it is right, which is the case with Sinister 2, when I met the director, in my mind, I was like, No, I’m too tired. I need something lighter, something I haven’t done before. I met Ciarán and we just couldn’t stop talking for two hours — and it was wonderful. What I liked about Courtney and her storyline was that it was actually grounded in more of a drama. I’m trying to protect them and make a better life for my kids — and I hadn’t done that before. Ciarán really cares about that part of the movie.

Working with kids, do they bring a different energy as an acting partner than, say, a seasoned 40-year-old?

Yeah. They’re very precious and in the moment. Well, all actors are in the moment, but I just love kids. You can really see them having fun and playing pretend, and you think, Yeah, I want to do that.

How analytical are you as an actor? Are you always analyzing a scene or is it more about instinct?

A little bit of both. There’s definitely a tendency to overanalyze, especially before in the prep. The prep is actually a very precious and sacred time, so you don’t want to let too much of that to creep in, but it can. Every time you start a new job it’s very scary. Yeah, I find room for the fun, too. My favorite is to do that when the camera is rolling [Laughs].

[Laughs] When do you begin to feel comfortable on the job? Does it take a few days or a few weeks?

How long was this shoot?

Six weeks. I was comfortable as I could be with this sort of material. It’s never super comfortable to do the really heightened fear scenes.

You mentioned how sacred preparation is. What’s usually your process? Do you tend to watch films or listen to music in the same vein as the project you’re working on?

I definitely always have a playlist. You’re going to ask me what my playlist is, aren’t you?

Yeah, I knew it… it’s a funny one. I’m asking for it, so I did that to myself. Music is huge. You know, I had a really great teacher who called it “time for pretend and imagining,” so there’s a lot of time just doing imaginative work. It becomes real to you, so you’re not acting.

Is it a similar process on a drama?

Yeah. The process does always change, though. Whatever is required of you you kind of have to do to get in that atmospheric mode — to get that cooking in your cells. I’d like to switch it up. [Laughs] The two back-to-back intensely worried and stressed out mothers was just so draining, truly. So, the playlist question?

Yes. What did you listen to?

I just went on YouTube and tried to find a lot of the old ’80s butt rock.

[Laughs] Why are you embarrassed?

[Laughs] I didn’t actually want to answer this question, so that’s why I’m bummed. I was listening to ’80s one-hit wonders. I just felt like Courtney and Clint would have that playing in the house a lot when they were first together.

So you’re not into skin leopard jeans?

It bugs the crap out of me.

[Laughs] What preparation took the longest amount of time? What role was the hardest one to crack?

They’re always hard to crack, and sometimes you don’t crack ’em. [Laughs] That’s the real truth. Wayward Pines was one of the hardest jobs I’ve ever had. I couldn’t crack anything there. Not to sound like I’m being too hard on myself, but it was a hard job. A lot of it had to due with being in Wayward Pines. I think the character was bleeding into the experience, for sure. You know, you always find out you get a job a few weeks before, it’s never many, many months before — at least not yet, at this point in my career. I always move quickly, and the plus to that is you move with first instinct, which can be pretty magical.

Right. That’s why Clint Eastwood does so few takes. He also doesn’t like screenwriters doing many revisions, because he wants their first instincts.

I’ve talked to screenwriters before about that. Some wish they had more time to polish the scripts, but maybe something good came out of it.

What is your interest in this business?

I had a feeling. How old are you?

You’re going to do it.

Do you know what kind of stories you want to tell?

All kinds. I’m sure just like you, as an actor, you kind of want to try everything.

Oh, for sure. You crave it. Where are you from?

DC. It’s great being in LA, though. People like to talk about how fake everyone is out here — and there are a lot of people like that — but there’s also a lot of passionate people here.

Yeah, you just have to find them. Have you met Ciarán yet?

It feels like you guys would get along really well. There’s a love in your eyes I can sense, an innocence about it — and I feel there should be more filmmakers like that. I feel that way about Ciarán, too.

I’m so excited for you. That’s cool.

Thank you. I know I’m running out of time, so I have to mention Wristcutters: A Love Story.

That’s one of my favorites.

Do a lot of fans mention that film?

I mostly hear about Rules of Attraction and A Knight’s Tale, but I wish more people had seen Wristcutters. That is probably one of my favorite moviemaking experiences, for sure. Everyone was very in character and it was a special little production out in Lancaster, which is the perfect place to have the dead, dull place you’d be stuck in after you’ve committed suicide. I found that really funny.

You’re one of the few actors who doesn’t use social media to promote their work, and you often post little short films you’ve made. Do you have any interest in directing features?

Yes, very much so. I’m a mom to two boys, so I have to be an actress-for-hire a lot, to support my family. I can’t tell you how much I’m craving to be in a cave and buckle down to do that. I’ve made other choices in my life, so it’s just going to take longer. That’s all. I write when I can. One day when the timing is right I know it’s finally going to happen. I feel much more comfortable wearing that hat, and sometimes in being an actress, too. I would be so excited to cast, make the pictures, and I love editing. The rhythm of editing is so fascinating to me. It’s so important. Even making posters seems fun to me. Every part of it just seems fun. I’m excited.

Sinister 2 is now in theaters.