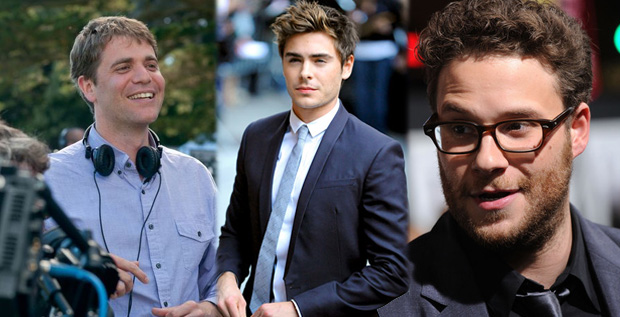 This is looking better and better; THR reports that Nicholas Stoller is in negotiations to direct Townies for Universal. The comedy, from writers Andrew Cohen and Brendan O’Brien, stars Seth Rogen as a family man whose life is continually thrown into chaos by a hard-partying frat member (Zac Efron) that lives next door, the duo who was first attached to the project last summer. This will be Stoller’s follow-up to The Five Year Engagment, which bowed last month to disappointing box office returns and middling reviews.

Townies has all sorts of potential to be one hell of a comedy, and I love the casting choices. Rogen is well-established as a great comedic actor, but his role as a family man looks to put him as the “straight man” in this movie instead of the one cracking all the jokes. As for Efron, he has shown potential for comedy (I will defend 17 Again if I have to, against my better judgment) over the years and I think that Townies could unearth a more raunchier side and allow him to branch out a little more.

And even though I wasn’t too high on The Five Year Engagement, Stoller’s previous work (Forgetting Sarah Marshall and its spin-off Get Him to the Greek) is good enough to forgive that misstep. Townies could end up being the comedy everyone will be raving about next year.

What are your initial impressions of Townies? Do you think the talent involved will make for a good comedy, or will they end up stumbling?