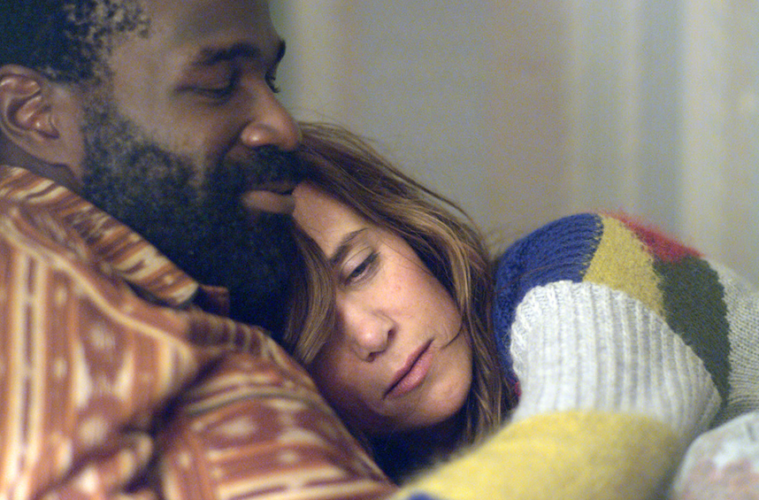 At first glance,Nasty Baby isn’t the movie you’re expecting, but if you know it’s from writer-director Sebastián Silva (Magic Magic, Crystal Fairy), then maybe you’ll see the turn of events coming a mile away. For the first two acts, Nasty Baby is a natural, loose and lovely romantic comedy, starring Silva himself and TV on the Radio frontman, Tunde Adebimpe, as a couple hoping to have a child together.

The film becomes another story by the end, which, while at Sundance, we thought it was better not to discuss the change of events with Adebimpe and Silva. Whether one enjoys the third act or not, it’s hard not to appreciate the audacity. Six features in, Silva is an independent filmmaker still taking chances.

Here’s what Silva and his co-star Tunde Adebimpe had to say about Nasty Baby, improvisation, and more:

The structure of the film is surprising, especially the third act. Do you outline?

Silva: Yeah, yeah. There was a pretty fleshed out outline, and it was close to 20 or 25 pages of this whole story. I didn’t write any dialogue, only actions. If you added dialogue to what I had, it’d be a formal screenplay. All the dialogue was improvised, but we had solid guidelines of what we had to convey in each scene.

Adebimpe: Yeah, it was clear the spot we had to land on.

Is that your process on every film?

Silva: Not on every film. I’ve made six films, but I’ve only done this on two films: Crystal Fairy and Nasty Baby.

How was that process for you, Tunde? Am I mistaken or wasn’t Rachel Getting Married heavily improvised?

Adebimpe: It was pretty similar. There was a structure in the script to bounce off of, but after one or two takes of getting what was on the page, we’d go back into it, just trying to figure it out.

Is there more pressure as an actor having to be such an integral part of the storytelling, or is it a nice feeling?

Adebimpe: It’s a nice feeling for me. Well, it depends on who you’re doing that with, but, in this situation, there was a ton of communication and ground level understanding of the feeling of what we were going for. It was positive pressure.

I imagine you didn’t have a huge budget, so how many takes could you usually get?

Silva: Oh man, so many takes. We shot a lot. A lot of times we’d just keep the camera rolling and repeat scenes without cutting, which helps you get so much more footage than if you were cutting every time something went wrong. Scenes never really took on a new meaning, because we knew what we had to do in each scene. Dialogue, jokes, movements, or even locations would come out or slightly change, though. Like, something written to happen in the kitchen would happen in the bathroom. For editing, we couldn’t change much, because the story was there. Everything was structured, not that we had a bunch of random footage.

Adebimpe: The days I wasn’t working I’d come in on set and I’d just see how you made a really full world for those characters. In any movie you shoot there’s going to be stuff that doesn’t make it in the final cut, but what it got distilled down to was absolutely the story that was there. Everything worked so well and felt so natural, because there was an actual live world we’d go into as we started shooting. I saw it for the first time last night and, I thought, the way the film played was exactly how [Silva] described it to me.

How helpful is it having your director be your co-star?

Adebimpe: It’s really helpful. He’s always right there, so you’re having that dialogue. The whole thing was extremely collaborative. You were never plugged in, like, “Okay! Do this dog! All right. We’re done here.”

Do you get a wildly different creative satisfaction out of acting than you do with music?

Adebimpe: It’s very different. With songwriting and with TV on the Radio, I’m sitting alone writing a demo or a part of the song, and then I take it to everyone else. I mean, it’s similar, in a way, but I like being a part of a bigger process, where I’m not generating the material; it’s not somewhere my mind would go, but it gets to go there.

Last night you half-joked about not wanting to ever make a movie this personal again. Were you completely serious about that or half-kidding?

Silva: Having only done it once, I don’t think I could do something similar or even close to this. I played pretty much myself in this movie. In the movie you see my place, where I live, my decorations, my cat, and you see some of the conflicts I’ve gone through. I do paint and have done art shows, so I’ve been a part of the art world. I thought it served the purpose of the movie well, so it’s not like I’m an egomaniac who has to share those kind of personal details just because. It is a lot of exposure, and I don’t think it’s healthy if you overdo that. I don’t regret a thing, though. I’m glad I went there.

I imagine that much introspection would be tough.

Silva: Yeah, yeah. I really don’t have any problems separating fiction from reality, because I know the experiment I’m doing. I know exactly why I’m using the elements from my life and giving them to the film.

Is it similar to songwriting? Does a personal song take more out of you?

Adebimpe: I pretty much used to write personal songs by default, because I didn’t know what else to do. As Sebastián was saying, it’s kind of an unhealthy thing to do, to go, “I have to go to this painful place to have something to say or sing about.” You know, I feel like if you survived ages 12-22, you have shit to write about for the rest of your life. Your most extreme emotions, with some exceptions, already happened. Your life is a springboard for fiction.

Can it be cathartic, though?

Adebimpe: It can be. It’s weird, because you do it and then… well, it’s only happened twice where I’ve been done with something musically or with animation that makes me say a week later, “Okay. That was good. I feel really good about that.” It usually takes two or three years later for me to realize what was going on that time and why I did what I did. Do you have a similar experience with your films?

Silva: I guess it’s like that with everything you’ve done. When you revisit something you’ve made in the past, you do discover new things about yourself.

Do reviews or reactions mean more or less when the film is this personal?

Silva: Luckily, I don’t struggle that much with that, because it takes a lot for me to feel offended or insecure. I am definitely much more exposed on this movie than my previous films, so there is more of an edge to, “Oh shit, what are they gonna say?” I don’t think it’s like that in a negative way, though.

How about for music?

Adebimpe: As far as opinions? If it’s more personal, I think I care less. If you walkaway saying, “Well, I know how I feel about that,” then someone picking that apart who wasn’t involved in putting it together… I can’t take that very seriously. As far as bad reviews go in music, most of my friends making music come from the angry fumes of punk rock, like, “Please give me the worst possible review, because it means I’ve done something right.” I remember my friends in a band got a one star review from Rollings Sone, and they wrote a letter to Rolling Stone asking them to take their star back, like, “Get the fuck out of here! We don’t want your one star.” [Laughs] You know, you can’t help but… it is weird reading a review, because suddenly you’re in an outside mind, like, “Wow. I didn’t really think about that.”

Is that a good thing or a bad thing?

Adebimpe: It’s just a weird thing, yeah. You’re bringing something to it I didn’t think about. It’s always interesting to hear what people say, but, you know, you don’t know what mood someone is in when they’re writing about something. Maybe a critic who just went through a breakup is pissed and has to trudge through a review.

Before I let you go, I’m a fan of the videos you’ve directed for TV on the Radio and the Yeah, Yeah, Yeahs. Are you going to direct another video soon?

Adebimpe: Thank you. I am thinking of making a film or a short. The band stuff is going to wind down by the end of this year, so I’m hoping to.

I would like to see you direct an animated film.

Adebimpe: I totally would. I’d enlist this guy [points to Silva], because he’s a brilliant cartoonist. I’m a snob with that shit, but he’s brilliant.