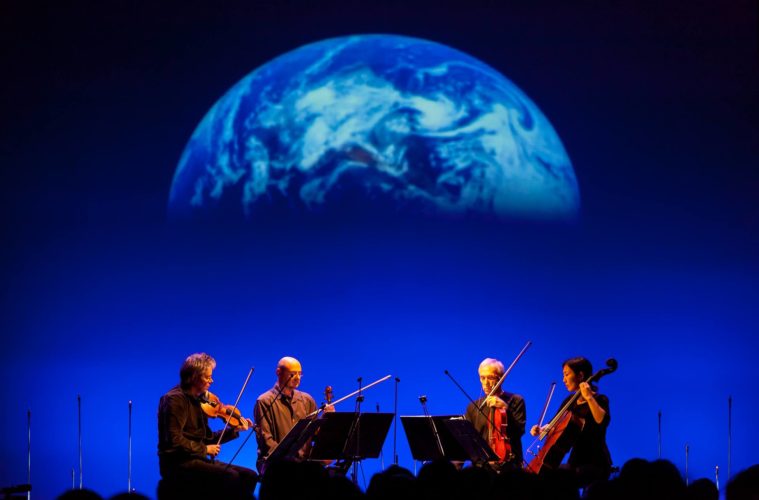 Sam Green on ‘A Thousand Thoughts,’ Kronos Quartet, and the Details of Live Documentary Filmmaking

Sam Green has been making documentaries for over two decades and, to hear him tell it, he’s really hitting his stride right about now. For the past few years, the filmmaker has produced live event documentaries in which he will narrate the action in person and on stage while music is played and media is presented on a screen above.

His most recent endeavor is A Thousand Thoughts, written and directed by himself and Joe Bini. The subject here is the Kronos Quartet, the accomplished music group that’s been around since 1973, founded by violinist David Harrington. While you may know their work best from their collaborations with Clint Mansell (who can forget the score from Requiem For A Dream?), they’ve done so much more.

Ahead of the New York premiere this Thursday at The Town Hall, we had the chance to speak with Green about his work with Kronos, the process of putting together a living documentary like A Thousand Thoughts and how each show is different than the last.

The Film Stage: How did this project with the Kronos Quartet come together?

Sam Green: This particular project happened because about four years ago [the Kronos Quartet’s] manager Janet got in touch with me completely out of the blue to make a historical video, a five-minute video, that could play at Carnegie Hall before their fortieth anniversary concert there. I didn’t know a lot about them but I was curious so I said, “Sure I’ll make it.’”And I listened to all of their records and I went through their archives as part of that project and I was super taken with Kronos. For a lot of reasons: from just the fact that they’ve been doing it for forty-plus years and they’re still great and they’re still taking risks and adventurous. I love that they’ve collaborated with a million people. They’ve just had such an interesting and inspiring career–and, on top of that, their music is fantastic. So I really was taken with them.

I made this video and it showed and afterwards in the green room Janet said, “Hey, if you ever want to do something longer, we’d be happy to.” And my heart sank. It was a really funny moment. Because I hate music documentaries. Most of them are so formulaic. They’re almost cliches, almost parodies of documentaries. They’re so bad. And usually it’s mostly the story of the group with a little bit of music here and there. So I said, “Thanks, but no thanks.” But it just weighed on me because there was something I really was taken with Kronos and a month or two later I had this light bulb go off over my head and I said, “Wait a minute, I’ve been making these live cinema pieces, what if I did something like that with them?’ The music then could really be at the heart of it. So I pitched it to David [Harrington] and Janet and David said, “Is it a movie or a concert or a lecture?” And I said, “It’s all three of them,” and he said “Let’s do it.”

I love the mention of “Black Angels” by George Crumb as the inflection point for David and the formation of the quartet. When you’re talking with them about how you’re going to approach this live documentary, does it all start with “Black Angels?”

Once we decided to do it, it was pretty clear I didn’t want to make a tribute to them and they didn’t want a tribute. I knew that it was really important that this be made independently of them so I said, “Okay, I’m going to make this piece and I’ll talk to you in a year and a half and I’ll show you and we’ll go from there.” Which is what happened. But from the beginning I knew there were certain pieces of music that were really important to the story of Kronos and so it would be great to have that story wrapped around them performing these pieces of music… “Black Angels” is this fantastic, really avant-garde piece of string quartet music that [David Harrington] heard on the radio and formed the group to play that. So it had to be in [the film] and it’s great to hear too. So that was an obvious one and I knew I would have him tell that story and they would play it, which is a great moment I think.

Agreed. One pleasant surprise was that Kirsten Johnson is credited as the cinematographer on this. Cameraperson is a movie that I love so deeply.

What is she bringing visually to the table, given all of the different points of media, etc.?

Well, I’ve been friend with her for many years, and when I saw Cameraperson I was so knocked out by it. It’s one of my all-time favorite films. It’s a masterpiece. It’s formally so sophisticated and elegant, but there’s also so much humanity in it. It just deeply moved me. I saw that and I thought, “I want her and her sensibility to be part of the mix.” I asked her if she’d work on it and she filmed all of the interviews and everything that’s contemporary she filmed. Not only does it look gorgeous, I think. I mean a lot of the time during the piece I’m just sitting there watching on stage. So I do three things: I marvel at how good Kronos sounds and how nice it is to be close to them while they’re playing; I am struck each time by how fantastic Kirsten Johnson’s cinematography is; and then Joe Bini, who worked with me and edited, a lot of the times I think, “Goddamn that’s a good edit!” But not only did [Kirsten] make it look good but her energy–and I don’t want to sound to New Age-y here–but when you show up in somebody’s house and have a crew the energy in the room is important and she brings a wonderful energy with her anywhere she goes. And so that was important to get people to feel good and relaxed and open up. Her presence helps with that a lot.

Yes, and you’re diving into some very personal elements here, especially with David, so that makes a lot of sense. You’ve performed this piece a bunch at this point, are there adjustments you make after each performance? Are you coming off the stage in Detroit with notes for the next show?

Yeah, for sure. Not in major ways, I mean the basic architecture of the piece is set at this point. Although the first couple of shows we did change things, we made some nips and tucks. Now it’s pretty much set but you’re right, we come off the stage in Detroit and say, “Oh man, next time can you start this piece just a second earlier?” For many people that would seem like no big deal but those little pacing [adjustments]–the way you show something–are so important. It makes a huge difference. And no audience member will say “Oh. I love that way you hit that cue. It made me like your piece.’ But if you can get everything hitting just right it’s like a poem or a joke. It’s constantly different and we’re constantly adjusting it. It’s like a comedian who goes on the road and does three shows a night and really hones their act by doing it.

To that end, I love that you have [composer] Philip Glass in the film saying “Music is a place.” It fits so well, of course, with the you and the quartet performing at specific venues. Do you have any specific memories of a performance where there was a different crowd or you paused longer than usual one piece?

We did a show last Friday at the Detroit Institute of Art. It was the most engaged audience we’ve ever had. We’ve done maybe twenty shows. Twenty-five. It’s always very interesting because I don’t want people to clap after the pieces of music in the film. But in a concert, when Kronos plays in concert, people clap after each piece. It’s a little weird, people don’t know whether to clap or not. In Detroit, people clapped three different times within the piece. They just stopped and clapped and there was a lot of applause and that was neat. I don’t know why that audience. Maybe everybody was having an especially fun night. Or maybe there was bar in the venue and people drank more! I don’t know. So every show is different. We were in Nashville a couple of weeks ago and we did two shows in one night. And the second show was–both were good–but the second show was the best I’ve ever heard Kronos play. I don’t know why. It’s always sort of a mystery but each show is different.

A cool thing about A Thousand Thoughts being fully realized like this is you have someone like Francis Ford Coppola who has talked about wanting to do something like what you’re doing. I’m watching your film and thinking ‘Somebody should call Francis and let him know!’

[Laughs.] It’s funny because he wrote a book recently about live cinema (Live Cinema and Its Techniques) and lots of people sent me links to it saying, “Oh my God! Have you heard of this guy?!”

That is great. Alright, so I’ll wrap it with the future. As mentioned, you’re an accomplished documentarian, Oscar-nominated and so forth. Are you planning to be touring with Kronos for a while longer or do you have your sights set on something new on the horizon?

The funny thing about [the live performance] world is that you book things way in advance. So we’re booking shows for 2021 now.

I think it’ll go on for a long time. The piece has been very well-received and they have a lot of fans out there. For me, I really enjoy doing it. They’re great. They’re great to travel with. It’s fun to do, it’s always scary. I get very nervous so there’s a kind of thrill that comes with it. And, more than that, with this kind of work the only way it exists is when you’re out there showing it. So I work very hard on this piece and, honestly–I don’t normally say this–but I think it’s the best film I’ve made. So I want people to see it and the only way to do that is to travel around and bring it to them. So I like doing it, I have only enthusiasm.

A Thousand Thoughts comes to New York City this Thursday at The Town Hall. Get tickets here.