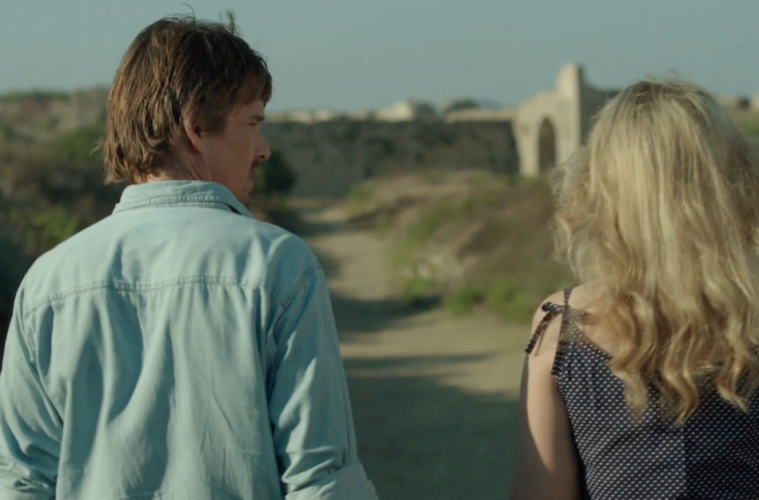 Romance In Europe: How ‘Before Midnight’ Connects to ‘Journey to Italy,’ ‘Certified Copy’ & More

Note: The following piece contains spoilers for Before Midnight.

During a discussion panel at the recent Tribeca Film Festival, Forrest Cardamenis, a friend of mine as well as a regular contributor to this website, posed the following question to Before Midnight collaborators Richard Linklater, Ethan Hawke and Julie Delpy: “When you are making the third installment of such a beloved franchise, how are you able to ignore the question of ‘what if we fuck up?’” The commendably frank wording aside, the inquiry cuts right to the core not only of the specific challenge in making Before Midnight, but in the general pressure that filmmakers and storytellers must feel when they attempt to continue an admired trilogy or series: Should they, to cite a recent example, take the approach of Christopher Nolan’s Batman trilogy, making each new installment bigger, louder and more grandiose than the last? Or should they keep the scale of the films consistent, thereby attempting to replicate the formula that made the series such a well-liked commodity in the first place?

The Before films occupy a unique space within this conversation, as the overarching structure of the films—real-time discussion being the most obviously consistent trait—has remained relatively stable over the course of the series. That each entry has been released precisely nine years after the previous one—Before Sunrise in 1995, Before Sunset in 2004, Before Midnight in 2013—similarly suggests a continuity of vision and scale, a preordained temporal structure that will always be followed. (Conceptually, therefore, the Before series has an affinity with Michael Apted’s Up series, which, since 1964, has produced a new documentary every seven years.) At the same time, though, the basic fact that the series has spanned so much time (nearly two decades) makes way for a growth that is as inherent as it is organic and natural: the characters in Before Midnight are 18 years older than the characters in Before Sunrise, so they will automatically have more baggage and life experience to grapple with. (This point was driven home nicely in a Film.com debate between Cardamenis and Calum Marsh.)

If the profoundly chronological nature of the series, then, makes it inevitable that Delpy and Hawke (who, beginning with Before Sunset, have co-written these films with Linklater) will mature and evolve, the effect of time on Linklater’s directorial approach is less certain. At the time of Before Sunrise, Linklater was a respected name after the accomplished likes of Slacker and Dazed and Confused, but the tone of the 1995 film—a strict two-hander about the blush of instant attraction—made for a pronounced departure, a film built more on genuine, intense intimacy than an ensemble-based capturing of a generation. This was the sensation of Before Sunset, too: after conducting two (successful, in this writer’s opinion) low-fi experiments with Waking Life and Tape, it was hard not to look at the 2004 film as a return-to-form of sorts, a homecoming to a pair of characters that everybody had already grown deeply attached to.

Likewise, the nine years between Before Sunset and Before Midnight have sent Linklater in all sorts of directorial directions: much like his American contemporary Steven Soderbergh, he’s a filmmaker whose identity is inextricably linked to his fondness for never sticking to one particular genre, tone, or narrative realm. (The guy who directed Me and Orson Wells is the same guy who directed A Scanner Darkly two years earlier? What?) But whereas Linklater’s experiments had little noticeable effect on the cohesion and connectedness of Before Sunrise and Before Sunset, Before Midnight, while still embodying the spirit of the series and representing a near-perfect continuation of essence and theme, nevertheless strikes me as the most aggressively self-reflexive of the three films. From the sneaky, sublime opening shot of those two pairs of feet—the second of which belongs not to Celine (Delpy) but to Hank (Seamus Davey-Fitzpatrick), the teenage son of Jesse (Hawke)—there’s the sense that Linklater is consciously bringing much more than carefully calibrated sincerity to this third entry. (As if the opening shot alone wasn’t hint enough, the same composition is repeated later on, at which point the feet do indeed belong to Celine and Jesse.)

Perhaps this shift was inevitable: with an impressive oeuvre that now spans across four decades, Linklater, in a way, no longer possesses the luxury of being able to take us completely by surprise: when Before Midnight’s Sundance premiere was greeted ecstatically, with many claiming that the film was even better than the first two, my personal reaction was, “Yeah, that makes sense.” A reasonable and perhaps even necessary response to such a situation (especially considering the context of a trilogy), then, is to foster an amplified sense of self-reflexivity, and Before Midnight’s self-reflexivity is most evident in its cinematic references: whereas Before Sunrise and Before Sunset, when paired together, carried a kind of standalone transcendence, Before Midnight is teeming with explicit hat-tips to masterpieces that Linklater is clearly indebted to and engaging with. The first can’t-miss parallel arrives in the first dialogue scene between Delpy and Hawke. Staged as a long conversation during an afternoon drive home from the airport, the scene is an immediate reminder of how adept the Before films are at lending compositional resonance to dialogue-driven sequences: the two young girls napping in the back seat are as crucial to the moment as the two lead actors, who are glimpsed, in a nod to Abbas Kiarostami’s Certified Copy (which itself is informed by the earlier Before films), through the windshield of their car. While the car-shot has long been a pivotal signature of Kiarostami’s work, Before Midnight feels connected to Certified Copy above all else, not only in its focus on dissecting the nature of love and romance, but in its reliance on the personas of its actors: whereas most of Kiarostami’s films are driven by non-actors, the co-leads of Certified Copy, Juliette Binoche and William Shimell, are nothing less than downright movie-stars compared to the average Kiarostami performer, and Linklater’s Before films are equally impossible to imagine with any other actors at the center.

Another director who has resided over the Before films from day one is the French filmmaker Eric Rohmer. However, as Michael Koresky notes in his wonderful piece over at Reverse Shot, the connection between Rohmer and the Before films often begins and ends with the word “talky,” an angle which overlooks more unspoken correlations. As if in direct response to this, Before Midnight takes the Rohmer bond and distills it down to one specific work: The Green Ray, Rohmer’s semi-improvised 1986 film starring Marie Rivière (who, like Delpy, also co-wrote) as a Parisian woman fighting to forge a meaningful connection over the course of a distraught summer vacation. Interestingly, while the Rohmer-Linklater relationship is often predicated on words, the main connection between The Green Ray and Before Midnight is purely visual: the image of two people, a man and a woman, watching the sun disappear below the horizon at the end of a long day. (In Rohmer’s film, a mesmerizing green line, almost in a Gatsby-like fashion, literally appears at this moment.) Before Midnight plays like it’s echoing The Green Ray in other sequences, too: the long dinner-table conversation, featuring Athina Rachel Tsangari and Ariane Labed (the director and star, respectively, of Attenberg), recalls a parallel Greek chorus-inspired sequence in The Green Ray in which Rivière’s vegetarian leanings are slowly picked apart; and Before Midnight’s wrenching hotel-room climax, with its shifting anxieties, combative insults, and thoughtful insecurities, is reminiscent of many of Rivière’s emotionally charged interactions.

Above all, though, Before Midnight might be most significantly linked to Journey to Italy, Roberto Rossellini’s 1954 film about a couple (George Sanders and Ingrid Bergman) who, after nearly a decade of marriage, finally begin to question the futility of their relationship. Not only is Journey to Italy literally name-dropped in Linklater’s film (Celine mentions it during the transitional sequence from the dinner-table conversation to the hotel-room climax), but, more crucially, it serves as a spiritual ancestor as well. In this sequence in Before Midnight, Celine and Jesse, after being bombarded with the stress and company of their children and their hosts in Greece, have at last been left to their own devices: as in the first two Before films, they’re all on their own now, walking and talking, with Linklater’s seemingly invisible camera recording their interaction. A famous sequence from Journey to Italy has Bergman’s Katherine, after suffering through a series of strenuous bouts with her husband, traversing the ruins of Pompeii, taking in the age-old structures and landscapes. In these locations—and never more startlingly than in the skulls she finds buried in the ground—Katherine sees the trials of her own marriage reflected back at her, and the built-up heartbreak of eight years of troubled marriage hits her like a ton of bricks. This approach of merging psychological investigation with natural landscape is mirrored in Before Midnight, in which Celine and Jesse’s walk to the hotel is given complicated weight by the physical structures—churches, ruins, gravel—that populate the path of their evening stroll. Delpy, like Bergman, is the on-edge character here, taking in her surroundings and, at the same time, wondering if their deterioration is present in her own relationship.

Like Linklater, though, Rossellini is no gloomy pessimist: he ends his film by having Bergman and Sanders reunite amidst a crowded religious procession, their rush of co-dependence doing battle with the people surrounding them. The narrative structure of Journey to Italy, then, goes from the interior to the exterior: while much of the film’s first hour consists of living-room or bedroom arguments between the two lovers, the film nevertheless ends on the outside, with the couple attempting to come together in the company of a hundred strangers. Before Midnight inverts this a bit, as Celine and Jesse’s transitional walk leads them not to a public space but to a defiantly private one: the made-for-two hotel room, complete with an expensive bottle of wine ready to be consumed. Linklater’s film, unlike Rossellini’s, begins in a more public eye (the airport, the summer retreat, the dinner) and then finally tests its protagonists to the fullest possible extent in a stuffy, spotless hotel room. It’s the ultimate exam for an on-the-rocks marriage: can the two partners spend a night in a hotel room without tearing each other apart?

The answer, in the case of Before Midnight, is a clear no: Celine attempts to leave the hotel room no less than three occasions, and the couple’s final, hopeful, complex embrace is conducted not in the room itself, but in a café outside. After nearly two decades of cinema, that’s what Celine and Jesse’s relationship comes down to: some brief words of reassurance after an excruciating, exhausting fight. The relationship has lasted eighteen years, wrestled itself through three films, and it’s as fragile as the bones of one of those corpses Bergman comes across in Journey to Italy. But it’s still there on film, where it’s been since 1995, and where it’ll always be.

What do you think of these cinematic reference points for Before Midnight? Feel free to chime in with others you may have noticed, too.