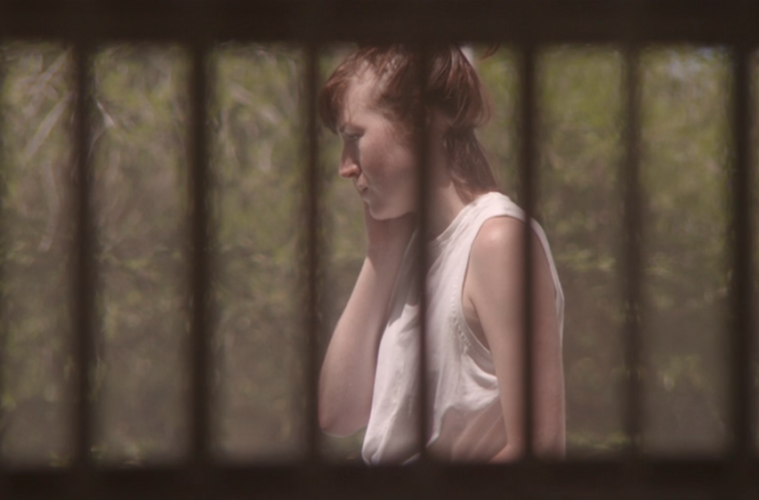 Florida TV news journalist Christine Chubbuck shot herself live on the air in 1974. More than 40 years later, actress Kate Lyn Sheil and documentary filmmaker Robert Greene have made Kate Plays Christine, an attempt to figure out the motivation behind Chubbuck’s suicide. But they do so via rather unconventional means. We spoke with Sheil and Greene at Sundance, where the film premiered, to talk about the film and how they used fake performance to explore real-life performance, as well as how we perceive both.

The Film Stage: When and how did each of you first learn about Christine Chubbuck and what happened to her?

Kate Lyn Sheil: I first heard about it for this project.

Robert Greene: It was probably 10 years ago, maybe more. A friend of mine told me the story, and I had sort of like everybody else’s reaction to it: “Holy shit”’ and also, “How come I’ve never heard of this before?” And then you find out it influenced Network, and then it makes more sense.

And what spurred you to make a film about Chubbuck?

Greene: The original idea for my last film, Actress, was that it was going to be a triptych. There would be a part about Kate, and then Brandy [Burre], and then an older actress, with each of them talking about different career stuff. But Brandy’s story just sort of took over the whole thing. Kate and I have known each other for a decade or so, the same amount of time we’ve been thinking about this movie. I never wanted to make a straightforward documentary about it. I don’t think it would get across anything that I’ve found actually unsettling and captivating about what happened. After Actress, I was thinking “What’s next?” and the title, the concept, and what we were going to do all came at once. I was like, “Kate, I’ve got this idea. Can we do this together?” It was building off Actress in a very direct way.

How much research did you do into Chubbuck’s life?

Sheil: Robert asked me not to do very much research before I got to Florida. Even if I were to do all of the investigation into the available information about her life, it would take 20 minutes or so, since there’s so little available about her on the Internet. I started reading Myths About Suicide by Thomas Joiner, a professor at Florida State University. I read about suicide more than I investigated Christine Chubbuck.

Greene: We were saving that for the cameras. That said, the research process is somewhat artificial, and staged in both obvious and not-obvious ways. The Durkheim book [Suicide] is important to me — it was very influential on how I think about the subject — and it’s also got the distinct red cover which is noticeable on camera. Kate wasn’t actually reading that one, but having her hold that red book is a cinematic expression of what she’s doing. So it’s representational.

What goes into how you control your performance in the film, both quote-unquote “as yourself” and as Chubbuck?

Sheil: The thing is that there’s the conceit that I’m in preparation for a narrative film that will be made at some point in the future, which is in fact nonexistent. That created a situation where I was acting the entire time. Even though I was genuinely doing research, because I was actually very interested in Christine Chubbuck and did want to find out more, I was also pretending to prepare as an actor.

I can talk about mannerisms and gestures sort of generally. For those reenacted scenes, the intention was that they were supposed to be bad, that I was woefully underprepared for them. There is no moving image available of Chubbuck on the Internet, so when I finally see footage of her in the film, that was the first time I had heard her voice or even seen her in motion. So I was just guessing before then. But people who knew her kept throwing around words like ‘hard.’ There was a masculine quality to their descriptions, but who knows what that means.

If you’re reading a script, one of the things acting teachers tell you is to read what other people say about the character. But [what people think about Chubbuck] is so flawed, and the things some people said about her were very infuriating, because I could imagine them saying the same things about me. Regardless, I did keep them in mind when trying to do the reenactments. Also, given the fact that she was a woman working in a newsroom in the ‘70s, there had to be a certain level of projected confidence. Otherwise, she would be destroyed by that sort of boys’ club.

Greene: I think straightforward documentaries record performances. That seems to me to be completely, 100 percent, non-negotiably true. Oftentimes when you’re in a documentary setting, your goal is to erase that performance, or try to make it seem as authentic as possible. The authenticity is the thing you’re selling to your viewer, because the viewer is naturally suspicious of documentaries because they know they’re half fictional, since they’re films. That’s why I’m excited for everyone to see Kate in this, because her performance says a lot about social performance and who we are, who we think we are, and the intentionality of movement.

Working with Kate was a revelation because she’s so in control of her body, and in this really artful way. When we’re seeing her build toward this incomplete sketch of Chubbuck, I think you can actually see that incompleteness in her acting. I don’t think there’s another movie out there that really catches such an incomplete thought. It put Kate in a situation to be herself and act as herself. I needed her to be in these reenactments that would be purposeful failures. The point was that we needed to embody something about the real person. That you can see all these things in different phases, and sometimes collapsed into one moment, is pretty neat.

Sheil: Yeah. I feel like I was doing character work to play myself, which is strange. There are also scenes in it when … for example, some phone calls are staged. Everything where I’m playing “myself” is staged. I saw the movie last night for the first time, and [cinematographer Sean Price Williams and I] just kept cracking up at all the times where I could tell I was trying to imitate my own mannerisms, or to be some version of myself. It just felt very silly to me.

Also, in terms of acting, I feel far more comfortable with a script. It’s just a different process when it is unscripted, because I as a person naturally have a confrontational relationship with the camera. If I’m not working, or I don’t know what I’m doing, or if I haven’t prepared, then when I’m being filmed, I just kind of want the camera to get the fuck away from me.

Greene: But I loved that. A lot of times, I’d be like, “No, you just did exactly what I want, and I can’t even tell you that it’s good,” because the point is that I see the confrontation, I see the resistance, I see the badness of the reenactments, and that’s what I wanted. I think the viewer can detect that attempt to say something. But she would just be like, “That does not help me. That does not make me feel better.” Sometimes, even when the camera stopped rolling, I could tell she was really annoyed at me. Ultimately, to me, if this was just an aesthetic game or some sort of exercise, academic or otherwise, it would be nothing. It would just be total shit. But I think that when you’re trying to read into the authenticity of what Kate’s doing, it takes you into a psychological space where maybe you can start to understand a bunch of things.

Why we try to tell stories about people who commit suicide? Why do we try to fill that hole with whatever we can? You’re seeing in every gesture, whether it’s directly related to the research into Christine Chubbuck or not. Every decision is sort of metaphorical, about that need to tell and explain. To me, the fact that there’s an emptiness to this is very evocative of the emptiness of trying to understand why someone would take their own life in the way that Chubbuck did. The film’s not actually about her. It’s about her story, and what it means to me, and what it means to other people. It’s about how everyone we met, from the wig maker to the journalist to the TV people, all filled themselves into explaining her suicide. They all put their own projections into it. That’s human nature.

In the film, you eventually find out that the widow of the old station manager supposedly has the tape of Chubbuck’s suicide. Did you consider trying to pursue that further?

Greene: We have her phone number, and we could’ve called her, but there was never any need to take that step. We also thought that there was a chance that we would continue filming. We shot in July for three weeks. I was assuming that we would have to keep filming, and somewhere in the back of my mind, I thought that if the movie needed something different, whatever that might be, that would be a stone we could turn over. But once I saw what the film was, I knew that wasn’t necessary. Not making that phone call is so crucial to what this film is.

There’s the recurring question throughout the film of whether you’ll end up actually reenacting the suicide. How did you ultimately decide to approach it?

Sheil: As it was pitched to me originally, we were going to do a straight reenactment of her suicide. Which was something I was grappling with from the beginning, and of course I never really wanted to do it. And as the movie progressed, I think we all sort of all mutually felt an increasing sense of the wrongness about doing that, at least in this particular film.

Greene: I always had in my mind somewhere the idea that we could do some sort of deconstruction. I had like, nine possibilities. One pitch I wrote out said that it’s either this, this, this, this, or this, etc. And every scenario was some sort of play on expectations. But then the psychologist told us how he thought that maybe Chubbuck was really angry with all the people around her. Sean and I walked outside and we were just like, “We can’t do this, there’s just no way.” We’d been working toward that anyway, but this was the definitive moment where we were like, “This cannot happen in any sort of straightforward way.”

After that, we all wrote versions of what we think the final scene should be. Kate took some of our ideas to heart and threw out most of them, and the result is her speech at the end. The idea of making a statement is so important — not only to understand what Christine Chubbuck was doing, but also to even understand how a movie like Network works. There are these emphatic words that say something deeper, and that’s what we see at the end. Kate’s speech is totally true, totally authentic, and totally scripted in a sense as well. But no one besides Kate knew at all what was gonna happen when the cameras were rolling.

Sheil: Even I wasn’t entirely sure what I was going to say. I’d written down my own ideas for the movie. There were many more points I’d considered, but they all sort of ended up circling this one idea of looking. “Why do you want to see Christine kill herself?”