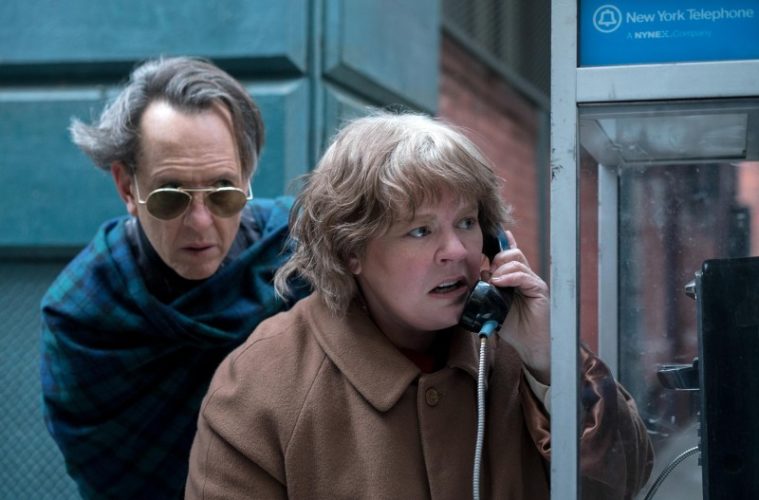 Richard E. Grant on the Authentic Queerness of ‘Can You Ever Forgive Me?’ and the Intimacy of a Female-Centric Set

Before Richard E. Grant goes to a galaxy far, far away in next year’s Star Wars: Episode IX, his career deserves revisiting. He starred in two late-career films by Robert Altman; The Player and Gosford Park. His character work continued with Bram Stoker’s Dracula, The Corpse Bride, and The Age of Innocence. But his most celebrated character is the title role in Bruce Robinson’s Withnail & I.

Grant’s Withnail is a young alcoholic who drifts and grifts his way across the English countryside, not unlike Jack Hock, the character he plays in Marielle Heller’s new film, Can You Ever Forgive Me?. With his cigarette holder in tow, he’s the gay Norma Desmond to Melissa McCarthy’s Lee Israel. Together, the two trek across Manhattan, committing one literary forgery after the next. And Grant delivers a magnificent performance in one of the best New York City-set films of the 2010s.

We spoke with Grant about playing a grifter with a big heart and small conscience, developing his character despite the lack of research material, and the contrast of going from Logan’s hypermasculine set to the almost-entirely female set of Can You Ever Forgive Me?.

The Film Stage: Jack Hock is such a loveable character. He reminds me of Fagin from Oliver Twist.

Richard E. Grant: Certainly someone who’s a grifter and lives on the street is out there scamming whatever he can. I think essentially he’s a hedonist who is out to have a good time. Also, as the audience discovers at the end, he is already HIV positive and on the way out. But he’s someone who lives for the day, in the moment, and he’s got ten bucks in his pocket and he has to burn out; buy a drink or do something with it. I think that’s a very attractive way of living. I know people like that, but you just don’t want to lend them money, keys to your apartment or your car, because you’re likely to never see them again.

How did you develop Jack without having much of his backstory?

I knew from Lee’s memoir, which was very scant on information about him particularly, he died at the age of 47 in 1994. He’d been in jail for two years for taking a knife to a cab driver, refusing to pay the fare. They had a disagreement about that. I knew he had been in jail. He had been running a bar and he was also very good at selling the letters once Lee was tapped by the FBI and wasn’t allowed to do it. They knew what she was up to. When she thought he might get $500 bucks for a letter, he would come back with two-grand. I knew from that he must have real charm or conviction, that he could fleece people who were in the know. He was also incredibly promiscuous. The other thing is he had this stubby cigarette holder. He was a chain smoker and thought that he would not get cancer by using that to smoke. I asked the prop department and Marielle Heller, the director, if I could have that little cigarette holder, because there had been no photographs of him, and they agreed. It gives a kind of loose affectation, a prop you can play with. That’s as much as I had to go on.

The queerness of the characters is essential and built into the movie. It’s a story about outsiders, but it doesn’t emphasize their otherness for dramatic effect.

Marielle was very determined that it didn’t become an issue-drive movie where we’re looking at a lesbian and gay character who are the main people in the story. That just happened to be who they were. It was the story of their friendship; a sort of oddball, platonic relationship in this kind of road movie through Manhattan. Except the motorways are from bar to bookshop, bar to bookshop to seedy apartment. That was the focus of it. And the fact that you then find out in the penultimate scene Jack Hock is actually dying of AIDS, that again, isn’t made a big deal of. It’s not pushed in your face. It’s just the reality of what these people’s lives were. Lee was a curmudgeonly, porcupine lesbian writer who valued her privacy. She was one of the few women who sought refuge and anonymity by wearing Walkman headphones and drinking scotch in the Julius bar. Because we were in the bar and bookshops where they were regulars where these scams took place, that still exists–you felt you were authentically in the footsteps of these people. You felt at once responsibility and gratitude as an actor because it wasn’t a studio recreation of their haunts. The fact that Julius was so generous to allow us shoot there, considering the character’s reputations weren’t exactly model citizens, I thought was a testament to their generosity.

Julius is predominantly bar frequented by gay men, but Lee would hang out there. Do you know why she was so comfortable there?

No, and we surmised if she had been in a straight bar, the chances are she would have been harassed by somebody. A woman on her own. Whereas, being the Julius bar, no one was going to harass her. She made herself a regular there. There was a guy hanging around the set one day and we couldn’t work out quite what he was doing, because he wasn’t in period clothes and he wasn’t part of the security unit. Melissa spoke to him and said, “Hi, who are you?” He said he was a great friend of Lee’s and he used to sit to the left of her in the place she’s sitting. She said, “While you’ve been watching, how do you think I’m doing? Do you think Lee would have been happy with what I’m doing?” He very pointedly said, “Well, happy wasn’t really Lee’s thing.” But he was greatly admiring of Melissa and he said, “You’ve appropriated the look, the costume and the whole gravitas of her personality.” That was a great compliment because Melissa never met Lee. There’s no video of her on YouTube and there’s very few pictures of Lee. The fact that he said that and felt like he was seeing the ghost of Lee was very poignant. She’d been resurrected by Melissa McCarthy.

Did you and Melissa test for chemistry?

There were no screen tests. I hoped he would have some rehearsal time the week before we shot, but Melissa was on so many other projects. She lives in L.A. and I flew in from London for a costume fitting on a Wednesday knowing we were starting shooting on Monday. I said to Marielle, “When am I meeting Melissa?” She said, “You’ll meet her on Monday.” It’s such an important relationship, from my point of view of the story, that going throughout a seventy-two hour period of the weekend without meeting her I would be so paranoid. I didn’t know what level she was pitching playing this part. I asked if there was any possibility we could meet for even ten minutes to discuss the script or how she’s approaching it. Melissa, turns out, felt the exact same way. So we managed to get half a day out of the schedule of her fitting and make-up tests on that Friday. We went through the scenes and discussed what the motives were, how we saw them. We had such an instant connection. I know people say this, but you have no idea. It’s like going on an internet date or whatever, if you are actually going to have a real connection with another human being in a story like this, and we just did. We hit it off. Even on the days I wasn’t shooting, out of the six-week shoot that it was, I inevitably came and had lunch with her on the set. We hung out a lot and that was out of a mutual desire to do that. I couldn’t have anticipated that beforehand.

What happened to Lee’s cat? Maybe I missed something, but it appeared Jack gave it the medicine. Did he give it too much?

The cat was dying. It just so happened to coincide the cat died on Jack’s watch, and maybe hadn’t given the pill at the right time. That cat was on the way out anyway. But she blamed him because it was kind of neglected. If he had seen the cat was ill as it was, he would have had the presence of mind to take it to the vet. But he was taken up with his trick that he picked up; the server from the diner.

Will you talk about working with Marielle Heller?

Marielle is somebody once you know precisely who’s in charge, she also wears her authority very lightly. She’s collaborative, encouraging, nurturing, open to suggestion, which is the ideal environment for actors to work in. It was predominantly female-centric: lead character, director, producer, co-writer, crew. The contrast couldn’t have been more extreme because I had just come off doing Logan, which was a crew of three hundred guys. [Laughs.] With stuntmen with arms the size of my thighs. Hardware, trucks and machine guns. Where this was an incredibly intimate, where usually in the scenes it was a conversation or interaction between two people.

Can You Ever Forgive Me? is now in limited release.