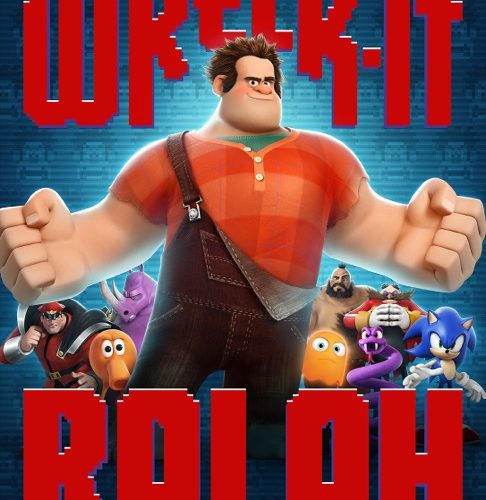 I no longer fit under the definition of a kid, but you wouldn’t know that based on the silly grin I wore throughout most of Wreck-It Ralph. What Toy Story did for fond memories of playing with action figures, Barbies and more, Disney’s latest creation will do for the video games of yesteryear, and even some of today. Rife with the expected references and subtle details, Wreck-It Ralph also genuinely surprises with a strong narrative that ties everything together.

Within Wreck-It Ralph, the worst thing that can happen to the inhabitants of an arcade is to be unplugged — essentially, it renders whoever can escape homeless. If there is a glitch in the game — like a character from Sonic the Hedgehog appearing in Street Fighter — that game runs the risk of being unplugged and carted off because it is broken. When Ralph (voiced by John C. Reilly), the bad guy of the game Fix-It Felix, Jr., is tired of not getting any appreciation for doing his actual job, he runs off to prove he is good. This spells disaster for his game-mates, as the game doesn’t work without him wrecking stuff for Felix (a hilarious Jack McBrayer) to fix.

However, as the story progresses, we find out that his game isn’t the only one at risk. The narrative initially heads down a predictable path, but it thankfully adds new layers and makes several swerving turns to keep one involved. Rich Moore directs with surprising confidence in his feature directorial debut, after cutting his teeth on subversive comedies The Simpsons and Futurama.

Although appearances from Street Fighter, Super Mario Bros., Q*bert and Pac-Man feel like glorified cameos, the driving force of the story rests on characters from three games coming together, all of them from original creations that don’t feel at all out of place. Sugar Rush seems like the offspring of Mario Kart and Candyland, while Hero’s Duty is influenced by things like Gears of War and Call of Duty (mainly in title and because it is an FPS). They both simultaneously mock and adore their influences, and much of the story’s levity is found within these worlds.

Moore is able to mix nostalgia and reverence for video games, as arcades are mostly relics of the past, but they are treated as one of the few places where games live on beyond today’s dominating home consoles. Even with the videogame setting, at its heart, Wreck-It Ralph doesn’t falter when it comes to story. By creating a world that feels worked out in terms of rules, Moore manages to keep one’s interest and even deliver a huge payoff for letting things slowly build. Part of that patience is because they have 108 minutes to work with, but whether its providing character motivations or just having a spectacular action sequence, the experience is consistently entertaining.