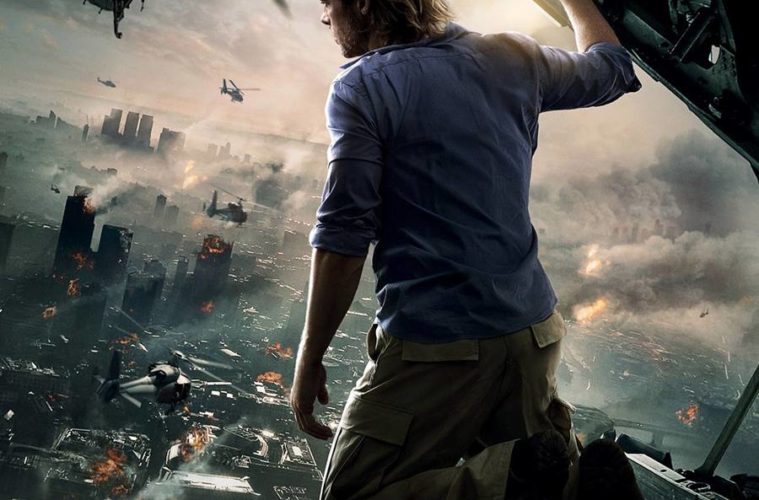 Bite and release; that’s the new motive of the hungry undead in Marc Forster’s expensive adaptation of Max Brooks’ World War Z. It’s also the tactic of the film itself, that wastes no time throwing summer movie audiences into an apocalyptic, globe-trotting adventure that bears little resemblance to its source material but finds plenty of time for Brad Pitt to smile generously while trying to save the world’s sorry ass.

There are no sluggish, sloppy brain-eaters in World War Z, just a coldly lethal wave of ex-humanity, now writhing, running emissaries for whatever mysterious pathogen has ravaged their bodies. As quick and relentless as its antagonists, Forster’s film marks a first; an almost family-friendly zombie thriller, that nimbly moves between big set pieces and trades up a final, massive fire-fight for a scene of quiet, deliberate creepiness. It’s not the cinematic zombie revolution rabid fans were looking for, but as a tasty big-budget monster movie, it does make for good fun. The word ‘zombie’ is rarely used in WWZ—amusingly, it’s been dropped in a pivotal email that gives clues to the spread of disease—but there’s no arguing that the chaos that erupts simultaneously around the world can be chalked up that now moldering, needs-to-be-cremated, genre staple. After an uninspiring title sequence, the audience is dropped into the perspective of retired UN investigator Gerry Lane (Pitt), who spends the film’s terrifying opening trying to get his wife (The Killing’s Mierelle Enos), and daughters (Sterling Jerins and Abigail Hargrove) out of a Philadelphia that’s quickly reduced to fireballs, stampedes and pedestrians moshing head-first into taxi-cabs.

This seat-of-your-pants escape is made more effective by the fact that we, the audience, are limited to Pitt’s point-of-view, never seeing more or knowing more than he does. A harrowing jaunt into a ransacked New Jersey department store has a specific shot that would be any husband and father’s worst nightmare, and it’s followed up just as quickly by a scene of surprisingly ironic humor. Forster, who let the Bond epic Quantum of Solace get away from him, is far better at orchestrating the big-budget excitement here while juxtaposing it with a carefully crafted levity that trumps the somber spectacle of last week’s Man of Steel. The primary gist of World War Z follows humanity’s effort to quell the tide of immediate conversion that strikes without warning and leaves nothing but more adversaries in its wake. A weary character later intones “Every human being we save is one zombie we don’t have to fight”. Pitt’s Gerry is recruited by his previous employers and acquiesces to join the hunt for the genesis of the epidemic, in exchange for safe haven for his family on the floating ships that have become the still-standing remnants of the United Nations. Enos and the girls are highlighted now and again to keep the family drama bubbling as Gerry’s motivation, but this is Pitt’s film and he carries it with a unforced bravado.

This isn’t Pitt the versatile and accomplished actor of Moneyball or Tree of Life, this is Pitt, the movie star, a side we’ve rarely seen on-screen since the Oceans’ movies ceased. The actor’s gentle charisma helps balance World War Z, which has understandably leeched all humanity and individuality from its undead pursuers and gives the revolving door of a supporting cast scant definition that could generously be referred to as ‘traits’. David Morse, Peter Capaldi, and newcomer Daniella Kertesz as a ridiculously resilient Israeli soldier, add an understated spice to the film’s breakneck pace that only slows down when Pitt and company reach Wales, and a research center besotted by the plague. What works best about World War Z is the way it co-opts a ragged subgenre for action thrills and then commits to thinking through its premise with a welcome pragmatism. I can’t recall a zombie feature where characters have the forethought to duct-tape magazine padding to their arms mid-attack, or take the time to verbally count the seconds between infection so they are never surprised by a comrade’s transformation. The gore and the guts are minimal, but the threat itself has a visceral ferocity that makes the set pieces all the more exhilarating. From a rain-soaked tarmac in South Korea to a breathless race through the streets of Israel, an unnerving airplane flight, and finally a cautious cat-and-mouse stand-off in an antiseptic Welsh laboratory, Z keeps its thrills fresh and fun by relying not upon the zombies, but humanity’s efforts to outpace its own demise.

Despite the veneer of a serious outbreak thriller, World War Z is just as silly as many of its low-budget brethren — its solutions and plot mechanics often straining the thin internal logic to well beyond the breaking point. This doesn’t matter when the ideas themselves are novel or intriguing, and a particularly inspired aspect of the film is how it lets us see other countries finding their own responses to the zombie infection. North Korea’s pre-emptive efforts are hilariously practical and horrendously fascist, while Israel’s strategy goes all the way back to the Bible for its inspiration. The result of such a stuffed film is that it often gets away from itself as a human interest flick, but to be fair, that never was its primary calling. What we have here, more or less, is a breathless roller-coaster that bites down when you want it to and mercifully releases so you can munch more popcorn before the next attack.