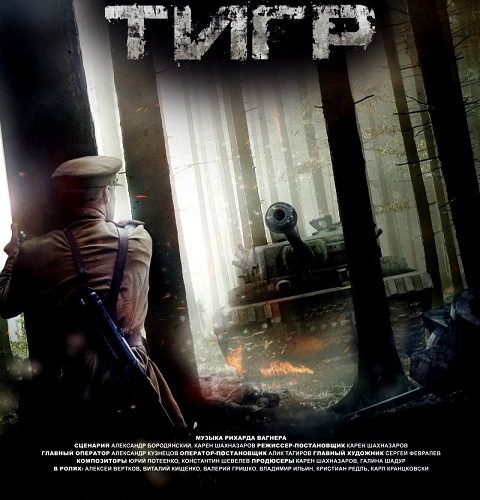 It’s a unique treat any time a film depicting World War II doesn’t center on the Holocaust or American forces storming the beaches of Normandy. Honestly, these are the two subjects we in the United States learn during our public school education because we frankly don’t need more detail unless delving deeper into the war becomes our dissertation in college. So the fact Karen Shakhnazarov‘s Белый тигр [White Tiger] concerns Western Europe’s Great Patriotic War between Russia and Germany makes it an intriguing insight on a subject we like to assume we’re experts in. Add the mysterious albatross of a seemingly undefeatable German Tiger I tank painted white and what was a foreign history lesson also becomes a metaphysical metaphor on death, destruction, and war itself. Adapted by the director and Aleksandr Borodyanskiy from Ilya Boyashov‘s novel The Tank Crewman, the film is much more than its surface lets on with the potential for interpretations non-Russians simply can’t make. Audiences expecting a straightforward account of tanks battling each other on the frontlines may be surprised at the eccentric spirituality in play as well as the visual language utilized before reaching its thematically complicated end. We’re dealing with a Jesus-like figure sent by the God of tanks to destroy a white devil decimating its metallic brethren. And it’s a shame this one sentence description can easily turn off about eighty percent of interested viewers. While the inner meaning may prove opaque, however, the cat and mouse chase at its center still delivers a good deal of suspenseful action.

Opening on the aftermath of a huge Russian defeat at the hands of a now mythical tank dubbed the “White Tiger”, we trudge through the muddy and creased landscape amidst burnt, mangled metal. Looking like a wasteland devoid of any silver lining eventually rests on one artillery behemoth that miraculously still has a beating heart. Blackened and smoking from head to toe, Ivan Naidyonov’s (Aleksey Vertkov) eyelids slowly part to force someone to take the time and find a pulse. He is a beacon of hope in an otherwise hectic, pessimistic life shown to us through a long shot inside a forest encampment by a camera that changes its character focus three times. It’s a stunning introduction to the impossible situation at hand and the rather slim chances for survival Ivan is given. Besides a bout of amnesia rendering him without an identity yet retaining the faculties necessary to be the best tank mechanic in the Soviet ranks, Naidyonov is soon on his feet without a single scar. Impossibly saved with the singular purpose of killing the elusive tank that burned him, he is Major Fedotov’s (Vitaliy Kischchenko) only choice to lead the offensive. Teamed with expert gunner Sergeant Kriuk (Aleksandr Bakhov) and loader Master Sergeant Berdyev (Vitaliy Dordzhiev), Ivan is let loose upon the battlefields so that the empty carcasses of tanks ravaged by the “White Tiger’s” merciless attacks can guide his search. Refusing to believe the beast vanished into thin air or sunk into the swamp at the end of its tracks, Naidyonov remains vigilant while his fellow soldiers and superiors begin to question his sanity.

Vertkov plays this tortured soul touched by a restless clarity of purpose to perfection. In a scene where he’s asked whether he’d like to discover his true identity in case a family is waiting for him back home, his matter-of-fact answer explaining how they would already have been notified of his death and that no one should ever come back from the dead is a fitting summary of the film itself. His character isn’t here to be a hero and receive commendations; he has returned to the fight in order to stop his nation’s most dangerous adversary. Battle after battle has seen the Tiger annihilate every tank in its path without recourse while soldiers declare it a force from hell no one can survive. Only Ivan has and only he hears the tank God’s guiding voice steering him to victory. But White Tiger‘s lead may not be Ivan. While he’s the pillar of fearless strength and last hope to prevail against this veritable Moby Dick, Kischchenko’s Major Fedotov’s skeptical yet faithful officer becomes the tale’s champion of heart over mind. While he cannot in good conscience believe inanimate objects talk to Ivan, he can’t ignore the man’s nearly flawless track record against it. This crisis of faith makes the film tick as it works towards the impossible choice of siding with his logical superiors or the man hearing whispers in his head. And when Ivan’s tank and the Tiger begin to manifest as ghostly apparitions disappearing in the smoke of gunfire, you must wonder whether either exist as more than a God versus Devil, good versus evil tussle fought on a plane much higher than our own.

This is where the film becomes more than its authentic depiction of the Second Great War’s carnage at the hands of tanks with stunning battle scenes full of fire and charred bodies. Dirt, mud, pain, and abject fear stain every frame as the war itself ends, but the over-aching fight against man’s dark side rages on to its next chapter in history. With two final scenes seemingly bound to the rest by a thin connective tissue, we watch the German surrender in an almost humanizing way to show these Nazis as men caught up in an event taking them away from the simpler joys of life as well as fascinating monologue courtesy of Adolf Hitler about possessing the courage to do what everyone else in Europe wanted but couldn’t.

If I watched both a hundred times as the code to decipher what came before it I’d still never grasp the truth. Maybe this is because my view of the war is too Americanized, maybe it’s my ignorance of Russian metaphor and mythology, or maybe it’s the filmmakers’ desire to leave interpretation strictly to the audience. Either way, this puzzling result turns White Tiger into a piece of cinema begging for conversation and that alone merits it being seen. Hopefully its recent selection as Russia’s 2013 Oscar choice helps increase its exposure to get that talk started.

Белый тигр [White Tiger] is currently on the festival circuit.