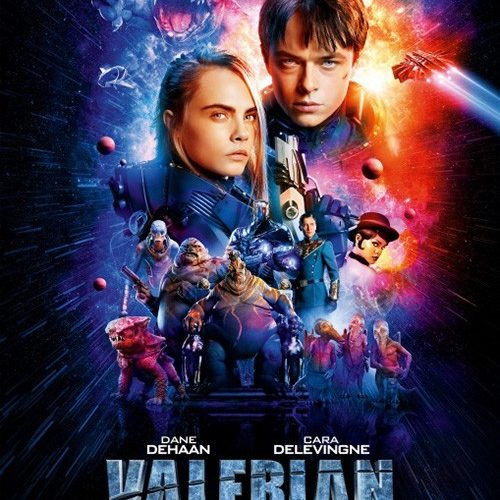 Review: ‘Valerian and the City of a Thousand Planets’ is a Positively Bonkers Space Adventure

Are there rules on how to make a space epic? If there are, Luc Besson has certainly never heard them because in Valerian and the City of a Thousand Planets, he takes the genre upside down, gives it a shake and rattle, and delivers one of the most positively bonkers films of the year. Based on the long running Franco-Belgian comic book Valérian and Laureline, which served as inspiration for other Besson projects like The Fifth Element, the film follows Major Valerian (Dane DeHaan) and Sergeant Laureline (Cara Delevingne), special agents of the World State Federation who enforce intergalactic safety, as they travel to a distant planet to retrieve a rare creature — perhaps the last of its kind in the universe — from the hands of toad-like aliens who run their business in a market straight out of Casablanca.

In the midst of retrieving the creature, by means of metallic sleeves that allow them to travel between different dimensions (don’t ask), Valerian relentlessly begs Laureline to marry him, establishing a rapport that’s part His Girl Friday and part videogame filler dialogue. Valerian, who we come to know is an interplanetary playa, doesn’t quite understand why Laureline won’t accept his proposal. He thinks so highly of himself that whenever she reminds him he’s a womanizer, he takes it as a sign to be more persistent. The film’s sexual dynamics seem to reflect the comic book’s life, albeit in an unbalanced way. Valerian’s cocky world view is straight out of 1967, when the comic first appeared, and Laureline’s straightforward take on feminism, complete with Taylor Swift-like quips, couldn’t feel more 2010s if it tried. Since he thinks of her as Barbarella, and she thinks of him as Han Solo’s pervy uncle, it’s unclear why we should root for them to succeed as a couple, but that’s not one of the only times the film asks us to completely suspend our disbelief.

Even for a fantasy film, Valerian and the City of a Thousand Planets is filled with so many implausibilities that Neil deGrasse Tyson would spend centuries pointing out everything it gets wrong in terms of physics, space travel, and human dynamics. Besson’s strength has never been in his storytelling, which is why the film drags when it gets too plotty. Valerian and Laureline soon discover that the creature they recovered might be the key to unlocking the disappearance of a pearl-loving alien race, who look like what the little oysters from Alice in Wonderland would grow up to be if they became tall, skinny supermodels. But before you can say foul play and refugee allegory, the cat-eyed couple are off to solve other problems and uncover political intrigue on board the Alpha, the city of the title which is nothing other than the International Space Station 400 years into the future.

Once they’re on the Alpha, the film reveals many other layers, mostly the cinematic and comic book references that helped Besson convey this world. Inside the gigantic ship, the director gets a chance to deliver his own serial of sorts as Valerian and Laureline become entangled in myriad misadventures that have them taking turns rescuing each other. One can almost hear a narrator’s voice announcing “stay tuned for the next episode,” as Valerian is lost after an attack, or as Laureline is “fished” by hermit aliens who plan to feed her to their leader. Even if the film never gets repetitive, the aimlessness begins to feel exhausting, even as Besson introduces incredibly insane characters like Ethan Hawke’s Jolly the Pimp, and Bubbles, an amorphous, amoeba-like alien who wisely turns into Rihanna when in human form.

If nothing else, the Alpha seems to be a physical manifestation of Besson’s subconscious, a place populated with oddities and eccentric costumes, where beautiful female creatures, alien and human alike, are preyed upon by corrupt males. Valerian and the City of a Thousand Planets doesn’t always work because Besson tries to imbue it with too much and all at once,  but when it does, it’s unlike anything you’ve seen. There are beaches within spacecrafts, little Komodo dragons that defecate jewels, an alien Emperor voiced by Elizabeth Debicki and more sterile, awkward flirtations between the leads than there are alien species in this universe. If Besson’s only sin is the extent of the images that inhabit his imagination and his desire to share it with viewers, one could do worse than spend two hours in this world. When a film’s credits include Herbie Hancock and Rutger Hauer, the trip ahead might just be worth taking.

Valerian and the City of a Thousand Planets opens on Friday, July 21.