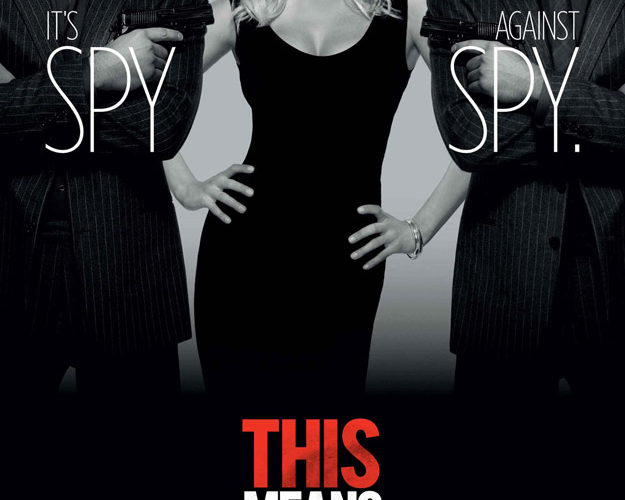 An early synopsis for McG’s latest told us that This Means War follows “two top CIA operatives waging an epic battle against one another over a new love.” With Tom Hardy and Chris Pine, two of Hollywood’s most charismatic up-and-coming stars being cast, I actually had some hope for the project. But after viewing the final product, one can easily replace “epic” with “agonizing and cliche-ridden,” while “battle” is better summed up as “an immature pissing contest.”

It is staggering how a major studio like 20th Century Fox could let such a careless, sloppily put-together feature film like this through their doors. Jokes land with enormous thuds (their boss, the squandered Angela Bassett, delivers something particularly painful about how a ladies man like Pine “slays” like the “assassin” he actually is). Don’t ask – one could hear the mass head-scratching of an entire theater. New characters appear two-thirds into the film when the time is convenient and simple conversations in the film ignore the basic constructs of editing, often wobbling to a conclusion with an awkward fade-out. And during action scenes – especially the opening number – McG makes Paul Greengrass look like Michael Haneke. If there is anything positive to glean from this experience, it’s the knowledge that movie stars are still movie stars and can elevate the worst of material. As Hardy and Pine each attempt to woo Reese Witherspoon, they have their moments; Pine’s naturally quick delivery works and, with Hardy, one can’t help but be charmed with every move. But ultimately, it’s like watching your parents fight. One wants to scream, “I love you, why are you doing this?!”

Witherspoon is fine by herself, displaying some vigor she hasn’t had in a long time, but when paired with anyone else the results are dire. Her grating best friend (Chelsea Handler) spews crude advice, proving to be a despicable wife and mother. Witherspoon’s chemistry with the two male leads is sterile, and McG’s attempt to force this with his lurid style provide some of the best unintentional laughs. Consider a scene where Hardy brings Witherspoon to a circus tent to do acrobatics for one of their first dates. With its overblown cinematography, the ludicrousness of these situations make later moments, wherein McG tries to inject reality, disastrous (especially some third act pity thrown at Pine).

For someone who was previously handed one of the biggest (and initially best) action franchises in the world, McG still has a fundamental lack of flair with the genre. As we are introduced to these two CIA agents in the opening scene, the editing is baffling, a trend to continue throughout the rest of the film; simple punches are masqueraded by a flurry of inexplicable cuts, and nothing builds to any sort of tension or excitement. As for creating a memorable villain – or, much less, one with any distinct motivations whatsoever – McG defiantly flops. Til Schweiger plays one of the most vapid characters I’ve ever seen on screen, his only identity being the same piece of music playing when he occupies the frame.

And if this is even an inkling of how our actual government runs, we are on the brink of destruction, something I’d gladly welcome if McG marks the standard for blockbusters. Since our male duo botched their first mission, it means they are sent on a break, seemingly free to do whatever they want with as many resources as possible and constraint on personal privacy. This includes each of them separately hiring 24/7 personal surveillance teams, using spy planes and purchasing millions of dollars worth of elusive art. One should expect this inanity from the director of Charlie’s Angels: Full Throttle, but, nevertheless, his lack of reasoning has hit a new mark.

When McG references, or just plain shows films like Butch Cassidy and the Sundance Kid, Goodfellas and a number of Alfred Hitchcock classics, it is with tangible sadness. As his track record has proven, it’s unlikely the guy will display even a glimmer of similar talent any of the aforementioned films include. Despite some appealing banter between Hardy and Pine, This Means War is a soulless exercise in establishing a new low for Hollywood blockbuster idiocy. Congrats McG, you’ve outdone yourself.