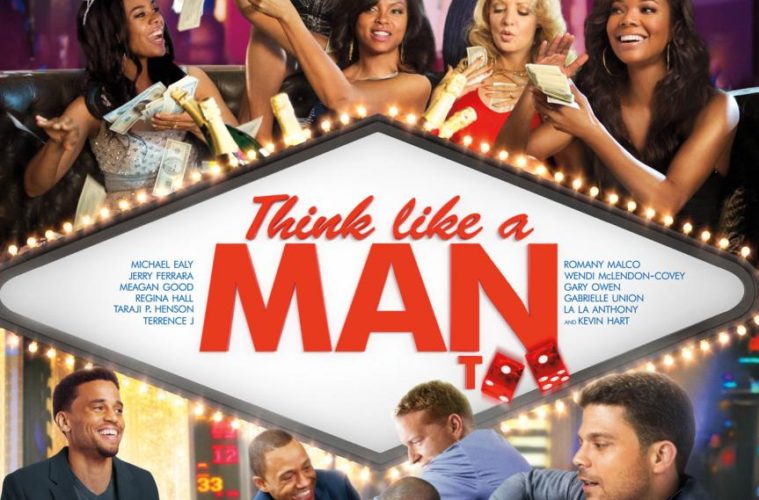 Taking a page from its 2012 predecessor, crossed with a little Last Vegas and The Hangover, Think Like a Man Too delivers exactly what’d you’d expect; fortunately, my expectations were for comfort food. With the original I merely recall seeing it, laughing periodically in a packed house, and forgetting it the next day. In the moment both are pleasant and high-energy sitcoms about the “Battle of the Sexes.” Here this perspective comes directly from narrator Cedric (Kevin Hart), in sports metaphors. He shares the same outlook as Pat Benatar as love is a battlefield and he’s living his own personal hell, newly estranged from wife Gail (Wendy Williams, in a funny cameo).

Cedric serves as a kind of self-appointed best man to Michael (Terrence Jenkins), who is about to walk down the aisle in Vegas with single mom Candace (Regina Hall). Joining the bachelor party are returning champions Zeke (aka Zeke the Freak) played by Romany Malco, Dominic (Michael Ealy), and Bennett (Gary Owen). Bennett, a parody of a suburban white soccer dad, brings along his uptight wife Tish (Wendi McLendon-Covey) who is given a makeover and is invited to join the bachelorette party. After escaping Michael’s overbearing mother (Jenifer Lewis), the gals, including Mya (Megan Good), Lauren (Taraji P. Henson), and Kristen (Gabrielle Union) steal the guy’s party bus and head out for a night on the town, Vegas-style. To say the film lacks fun moments would be a lie, and I certainly must acknowledge the audience was having a good time, yet broad comedy remains highly subjective. Recycling from many a good situation comedy, director Tim Story drives everything we’ve seen before, including that painful scene where everyone has to spend the night in jail.

As far as “Vegas wedding bachelor party comedies gone wrong” go, Think Like A Man Too is too run of the mill. Directed with energy by Story (also deserving of credit is his editor, Peter S. Elliot), if only it had an original script it might have been a comedy highlight this summer. The battle of the sexes seems rather outdated although individual elements of bachelor-bachelorette parties competing to outdo each other could make for a very funny comedy. This one, like its characters, takes too few risks. Here the characters are given some minor development by screenwriters Keith Merryman and David A Newman, while the film mostly hinges on one-liners and gags. Some work, some don’t, and everyone remains unsure of their next move, especially poor Cedric who accidentally books a $40,000 a night villa on his wife’s expensive account and sets about to win it back — hey, that’s a little like Rain Man, 21, and Last Vegas.

The presented drama hinges upon classic tropes like a fear of commitment, success and saying no to one’s mother. Nothing inspired happens even if a few moments prompted a smile once from time to time; Think Like A Man Too isn’t terribly painful so much as its safe and predictable. Tragically, it sets up comic possibilities that it does not deliver upon, including the bachelor party after-party (perhaps Last Vegas beat them to it and they reshot an ending).

While several refreshing summer comedies — from Chef to 22 Jump Street and the subversive Obvious Child — are currently playing, romantic comedies headlined by stars of color are appealingly rare at the multiplex. This fact unfortunately makes Think Like A Man Too all more disappointing, but one only needs to head back to About Last Night to see Hall, Early and Hart star in something smart and delightful.

Think Like A Man Too is now in wide release.