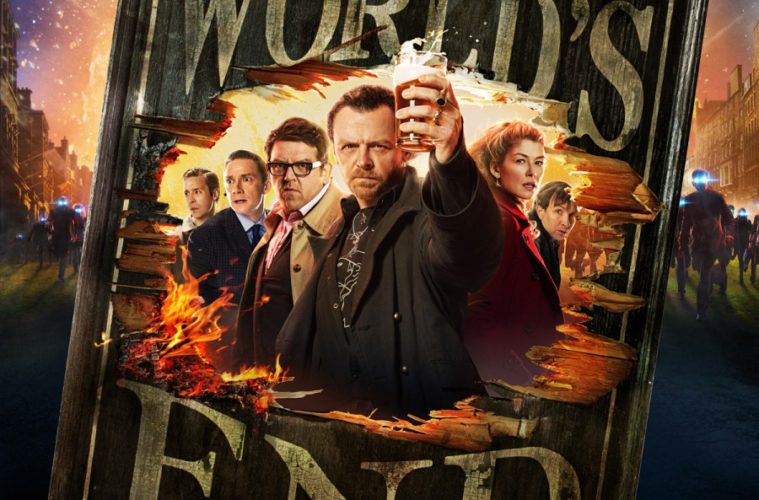 Shaun of the Dead opened with the notes of classic horror layered over studio logos from the 21st century. The initial aural-visual impressions from Hot Fuzz are police sirens scattering through a soundtrack as title cards transform to the will of these invasive tones. As the Focus Features banner fades in at the start of The World’s End, a voice pleading for freedom and independence — as transmogrified through the classic sampling in Primal Scream’s “Loaded” — fills our ears, only in its suggestions instantaneously vaulting us back to an experience since erased by time and personal adjustment. In seconds, the three-piece seam has been formed: a crossing of the past and present; a dive into the single-minded visage of another; and that throbbing desire to break from a norm, finding oneself consumed by their past.

Before any bearings can be established, we open on a voice that will carry us through the sordid, seemingly precious history of a decades-old night in small town England, the story communicated as strongly through images as it is by words: grainy, 8mm-esque flashes of mismanaged youth illustrate an entire film’s-worth of plot, humor, and character progression, neither a single shot nor cut wasted in spinning this necessary-yet-electrifying round of exposition. All the while, “Loaded” plays on. No matter the extent to which the craft can be admired — and how easily, to boot — there’s little about this film, by now, which stands apart from what any anticipation-filled audience member would’ve hoped for to begin with. But, right as we’re about to find our bearings in a present-day environment, the montage concludes with a shot equal parts humorous and emotionally deadening — an official introduction which reframes that entire adventure. Even as we laugh, our sturdy sense of appreciation has been put on the line, open to the opportunity of having been fundamentally misguided.

So it goes for much of The World’s End, the final installment of director and co-writer Edgar Wright’s Three Flavours Cornetto Trilogy, itself a genre-bending triptych occupied in parts one and two by Shaun of the Dead and Hot Fuzz, respectively. Six years after co-writer Simon Pegg and co-star Nick Frost sped off in pursuit of justice against general debauchery, there are new lives of continually misdirected Englishmen (and their seemingly indomitable tasks) to indulge in. But this is not exactly the same as what many have grown to love: though The World’s End casting its net toward questions of aging and conformity may not resonate as daring or a surprise, the application of these matters is, often, outright galvanizing. For as funny as it is — and for as frequently as it is so funny — this is a film unafraid to stare such matters square in the face or establish undercurrents of frustration and regret from almost the get-go, eventually building to a commotion of people and events that, for all its high-concept flavoring and comedic value, is both moving and relentlessly, unbearably, overpoweringly melancholy. Not to suggest that the tenor of installments past is gone, much less diluted: it’s a fun, goofy, quotable, occasionally (i.e. whenever appropriate) slapstick trip, even with rounds of action sequences that put the rest of this summer to shame. The styling required of Wright, here, is notably more restrained than more recent work (e.g. his nearly exhausting Scott Pilgrim vs. the World) could otherwise suggest, but from end-to-end does his command of cinematic language and grammar remain intoxicating. For a screenplay with as many layered, carefully arranged verbal exchanges as this has to its credit, it would be uncommon how reliant so many scenarios are on visual gags — from the obvious (a certain “shortcut” bit) to the subtle; one, in particular, may go unnoticed, but has this writer chuckling somewhere around a week-and-a-half after a first viewing — if it hadn’t been what’s already expected from Wright, who in four features has made an ample case for himself as a bona fide master. Maintaining the qualitative tradition, his return to Pegg and Frost uses formal dexterity as more than glitz — it’s a tool of the humor. As shot, edited, and scored, it’s a two-hour comedy utilizing means so clearly capable of highlighting and emboldening scripted material that it raises the question of why no one else would so much as appear to attempt something of a similar accord.

That this is so reminiscent of Shaun and Fuzz would signal the orchestration of a large, palpable shift of onscreen dynamics as one of End‘s bigger surprises. Their two-hander manner has been jettisoned in favor of (what is initially) a five-man alignment spearheaded by Pegg, who, in the lead as man-child Gary King, mixes proper levels of on-the-surface irritability and an under-the-skin desperation. It’s a performance to savor, yet sides of frames count in the moment: as occupied by Frost, Paddy Considine, Martin Freeman, Eddie Marsan, and, eventually, Rosamund Pike, there is constantly something to observe — a facial tic or withering glance speaking louder than words.

But what words they are. Much of The World’s End‘s simpler pleasures can be traced to the ensemble’s back-and-forth duel of dialogue, built upon a verbal structure which maintains a consistent wavelength of affable foolhardiness; no one of them are too stupid or too wise to rob the comedy of efficiency. Although we’re presented the four other males as a supporting mass to Gary’s self-deluded whims, Frost is clearly going to hit the second-lead status before credits roll; as incidents accumulate, the inevitable comes forth at a gradual pace, rising and rising until its third-act arrival is fully-formed and without a trace of compromise. This is a notable turn on the part of both screenplay and actor, though how it falls into action is by way of an indistinct strategy that some could very well not notice. Alas, The World’s End — up to this point an essentially perfect film — fades, momentarily, when its science fiction conceit is introduced; during these junctures it’s unclear how — or, for that matter, why — Wright and Pegg would steer the action in such a territory when character-driven comedy had been clicking with such dynamism. And, so, paired against the film’s more clear virtues, this angle is always a little uneven; because the narrative structure is otherwise pristine — and because of how true it feels, as both basic character arcs and emotional throughlines go — an invading alien force brings with it the slight sense of having been grafted onto a more traditionally pleasing piece of material. Wright and Pegg do what they can to make it work, still, and eventually the narrative rhythms & thematic patterns show themselves not to have been so much abandoned as they are recalibrated with only a minimal loss of sight. It’s about the connections, really: where Shaun of the Dead concerned a reluctant acceptance of responsibility, and as Hot Fuzz could be noted as following the bloody repercussions, The World’s End is its comedown — that point in your life when fulfilled requirements have already begun to swallow our personalities whole.

And the process by which a third act dovetails into this notion, aligning emotional currents, is concurrently natural and uncommonly shocking. After the fact, those familiar with conclusions to previous Cornetto installments won’t be massively surprised as to how the trilogy closes (insofar as a thematically and humor-linked series can “close”), but in the time since it’s had a discomfiting quality — arguably among the more fittingly selfish and cynical endings to any film released in 2013.

Like a majority of the experience, it’s a bold move that has an almost-stern measure of control as the guiding force; The World’s End, in its frequent oscillations of tone, rides toward a logical end-point that makes for the simultaneous fulfillment and subversion of expectations. Edgar Wright, Simon Pegg, and Nick Frost have achieved a rare feat: the trilogy-closer which doesn’t merely avoid deflation, but carries themes and motifs nearly a decade old right to the finish line. How’s that for a slice of fried gold?

The World’s End is now playing in the U.K., and will be released in the U.S. on August 23.