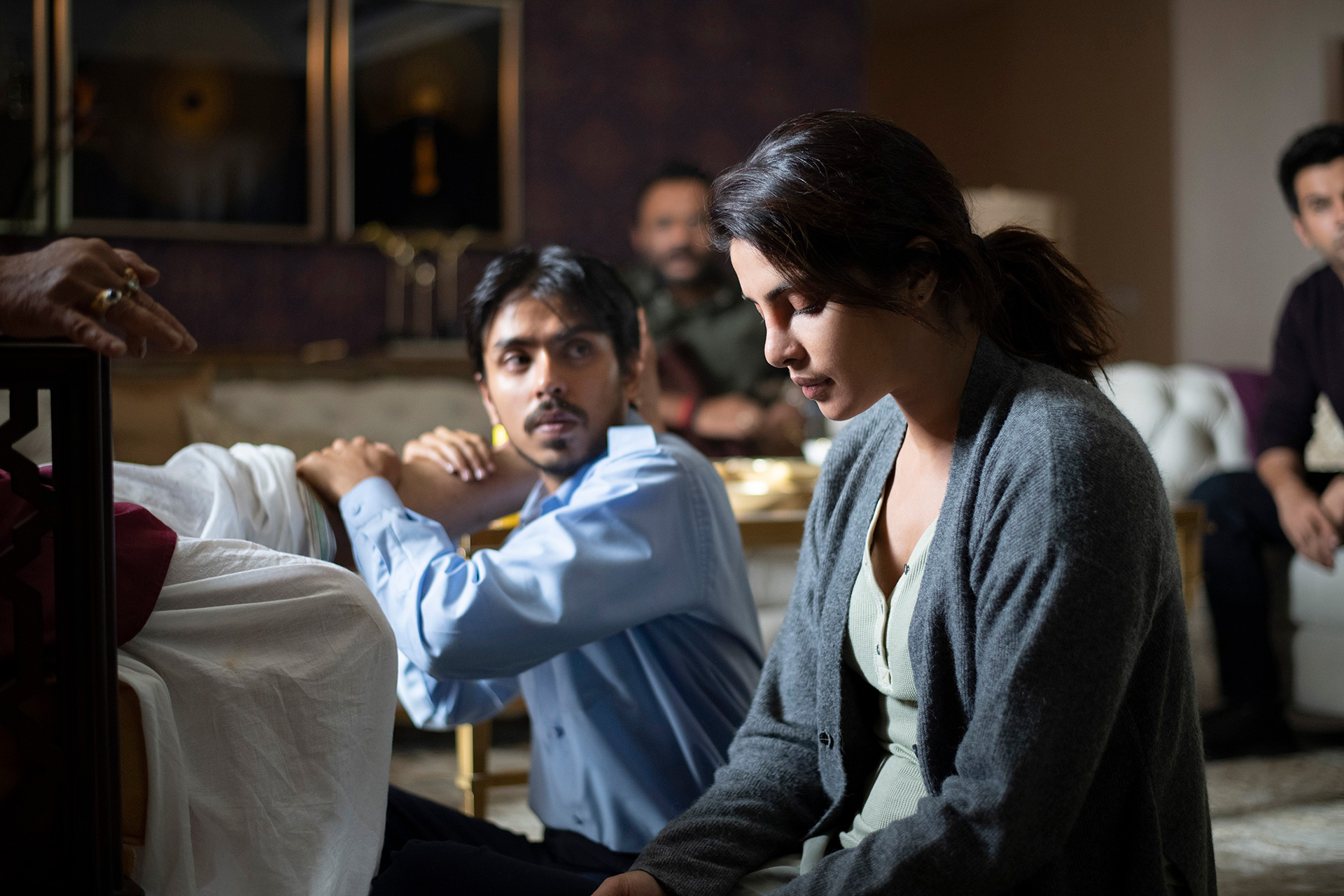 You know that young Balram Halwai’s (Adarsh Gourav) ascent from servant to entrepreneur within Ramin Bahrani’s The White Tiger won’t be quite what we’re used to thanks to two moments. One comes via a quip at Slumdog Millionaire‘s expense explaining how there are no game shows in India that could make someone from Balram’s sweet-maker caste rich. The other is when we discover the so-called “Great Socialist” (Swaroop Sampat)—the nation’s leader and a woman who herself rose from “country mouse” to powerful politician—isn’t afraid to fill her own pockets despite the image she projects. You don’t escape the sort of poverty that Balram was born into with idealism. You do it with pragmatism after realizing freedom within a democracy isn’t actually free. It must be taken.

So don’t expect to learn Balram’s kind master Ashok (Rajkummar Rao) gave him the seed money to ignite his business and don’t expect the sweet persona that endears him to men like Ashok’s ruthless family (Mahesh Manjrekar as his father “The Stork” and Vijay Maurya as his brother “The Mongoose, both bullies who used to shake down Balram’s village for rupees) will open doors and provide him luck. That stuff only happens in fairy tales. Bahrani’s adaptation of Aravind Adiga’s Booker Prize-winning debut novel may have a heightened air of fantastical satire, but it’s happily-ever-after isn’t one where hearts and minds prevail as good vanquishes evil. No, this is about one’s constitution. It’s about finding the strength to break your masters’ chains and spill their blood.

And we know from the start that Balram does exactly that. We see him in an office, oozing confidence as he types a letter on his laptop to China’s Premier that describes how it was he got there. That is what the film is: a recollection told with the vitriolic hindsight of having lived it. Balram narrates the tragic childhood that stole his education, the domineering grandmother who stole his wages, and the career that stole his innocence. The latter doesn’t, however, make him an antihero. Men and women struggling for their humanity under their oppressors’ boots don’t wield violence or betrayal as villainy. Robin Hood is still a hero despite what the rich may think. Balram merely woke up to finally recognize the hypocrisy of his existence.

The film presents the lessons he was taught in the school of life. As a poor servant whose sole existence is to serve, Balram was afforded access to conversations those in power would never let anyone on their own level hear. He was invisible—even less than that to most. Ashok played the part of benevolence thanks to an American education and marrying a progressive woman who’s unafraid of the patriarchal rule of her homeland (Priyanka Chopra’s Pinky), but he remained the “little boy” in the room when surrounded by his family’s remorseless monsters. So Balram listened to them. He listened to everything. He saw through the façade of justice and charity being fed to the lower castes and witnessed how the rich’s corruption guaranteed the poor’s suffering.

He also learns from his mistakes. Being “clean” where he comes from isn’t the same as being “clean” in the world of Delhi. Solidarity with those of his class isn’t going to curry favor with those above him, so capitalize on any opportunity you may have to stab your equal in the back and rise above them. Realize that the relationship between master and slave isn’t the same as employer and employee. If Ashok is treating him like a human being, know that it has more to do with the environment than it does him. The instant “The Mongoose” enters the frame, both Balram and Pinky find themselves disposable even if they were everything just a second earlier. Play your role. Bide your time. And pounce.

Balram is the “white tiger” of lore, after all. He’s that once-in-a-generation figure with the foresight to talk his way out of the past and work his way into the future. It’s not “The Stork” and his reliance on other masters above seeking bribes. It’s not Ashok and the comfort he’s been afforded to never truly have the courage or drive to succeed when his definition of “failing” has always been pouting on the couch for a couple days before trying again. That’s why it doesn’t really matter how many people those men kill or trample to rise to the top. Their undeniable ruthlessness will never match Balram’s because he’s marrying “The Mongoose’s” brute force with Ashok’s first world mind. He’s learning from their mistakes too.

The White Tiger is thus as much a changing of the guard as it is scathing commentary on life in India (or anywhere for that matter, considering the socio-economic disparities intrinsic to it aren’t exclusive). Balram keeps things light because he knows how dark things will get. He makes light of the scenarios he must consider before acting even if they concern whether or not his entire family back home will turn up slaughtered as a result. It’s funny at first because its reality is so absurd. It doesn’t take long, though, before we understand none of it’s absurd at all. We only think it is because we like to believe our own fates in America would never be so dire. But that belief only exposes your privilege.

At a little over two hours long, this is an “epic” of sorts like the description teases. We move through decades of Balram’s life with numerous hard-knocks and the odd moments of abject despair and it all flies by with quick wit and a faster pace. Bahrani toys with breaking the fourth wall at times (we are the Chinese Premier’s surrogate and thus the direct audience for the narration) to add a bit more fun, but he never diminishes the importance of the drama and the futility of being someone who’s beholden to the whims of another. That edge is necessary to take things where they go without losing focus. Balram being constantly underestimated affords him the opportunity he needs to pounce. Hubris is a great equalizer.

And Gourav embraces the ability to embody that potential at differing stages of his character’s evolution. He moves from naively goofy to confidently stoic with every flip from servitude under Ashok to standing tall with a net worth beyond his past self’s imagination. The further along we go, the closer to a hybrid identity in the middle we get. That’s where Balram is faced with choices that affect more than him alone. It may be cynical to pull the trigger anyway and say the others’ inability to escape was their fault, but the system that weighs them all down can’t be dismantled from the outside. If corrupt leaders buy their way to the top, so too must any hopeful emancipator because nothing greases bureaucratic wheels quicker than cash.