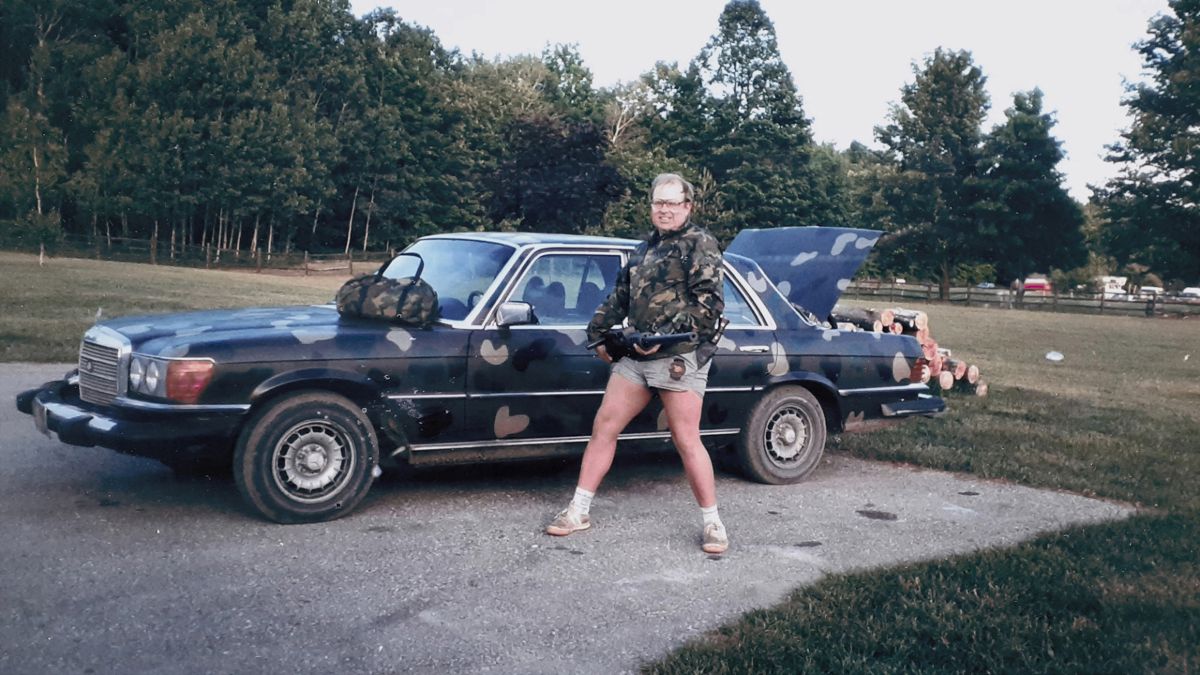 It’s an eerie image. Richard Davis stands out in a field, wearing a kevlar vest, and points a pistol into his belly. Then he pulls the trigger, skips back a bit, and checks his red-burned skin. Over the course of his life, he would do this—shoot himself—192 times, proving the efficacy of his life-saving device in the most visceral and operatic way possible. “A lot of people think I’m stupid for doing this,” he tells the camera before one of these high-wire demonstrations, and for just a moment, an air of unpredictability hangs over this bullet-proof vest magnate’s next move.

In 2nd Chance, Oscar-nominated director Ramin Bahrani burrows into that volatile, near-fatal showmanship, attempting to get to the bottom of an empire’s rise and fall. Of course, that’s not an easy task with Davis—still alive and very much aware of his polarizing legacy—who sits on his couch and acts as an unreliable narrator of his life and the events that made him a celebrity eccentric throughout the police and body armor industry. As Bahrani goes to great depths to verify his subject’s contradictory tales and the circumstances behind his company’s termination, 2nd Chance turns into a familiar American portrait of mythmaking and cognitive dissonance.

Chapterized and guided by Bahrani’s voice-overs, the documentary moves chronologically through Davis’ life, beginning in 1969, when he owned a failing Detroit pizzeria and filed for bankruptcy not long after being shot on a delivery run. Determined to protect police officers (and himself) from gun violence in his neighborhood, Davis pivoted careers by inventing a life-saving nylon vest that could be worn under an officer’s uniform. Grassroots production and marketing—including those point-blank gun videos—soon legitimized his efforts throughout the city’s police units. Once word got out, Davis would move his operation north to Central Lake to build Second Chance, a bullet-proof vest company that would quickly become a nationwide empire.

Perhaps the most crucial person to this early endeavor was Aaron Westrick, a police officer whose Second Chance vest saved his life during a shootout with a young Black man. Recognizing Westrick’s success story as a prime marketing opportunity, Davis latched onto him as a friend and eventual business sidekick, initiating a numerical “saved list” to advertise in newspapers and in the cheesy, melodramatic short film commercials he directed. As sales began skyrocketing across the country and Davis gained more clout, he became more outspoken in his politics, turning a noble endeavor into ego-driven propaganda.

It’s here where Bahrani starts chipping away at his subject’s carefully manicured facade. Thanks to a plethora of home video footage, 2nd Chance observes a man just as enamored with destruction as he is with preventing it—Smokey the Bear with a kink for arson. Throughout his three-decade reign, Davis would host shooting events and fireworks shows on his massive farm (which led to lawsuits and threats), where he often fired high-caliber bullets into rigged explosives, old cars, and soda bottles. When pressed to share some of their interactions together, Westrick recalls Davis telling surviving officers that he’d reward them with a gun if they killed their shooter in the line of fire.

Speaking with Davis’ first and second wives, along with former Second Chance employees, friends, and acquaintances, and then locating old photos, police reports, and lawsuits, Bahrani challenges Davis with specific rebuttals from behind the camera. Uncomfortable and incapable of relenting to his interviewer’s evidence, Davis scoffs off accusations with a narcissistic belief system that’s served him throughout his career. It’s the kind of squirming that makes Davis such a fascinating and frustrating subject, and the way Bahrani isolates him within the frame provides insight into the way he’d managed to evade trouble for so long.

It did eventually catch up to him. In the early 2000s, after Second Chance switched to implementing Zylon—a new, stronger fabric—into its vests, the company determined that the material degraded much quicker than expected, making the products they had sold to police and the military (thanks to lucrative, post-9/11 contracts) defective. The Second Chance board voted to continue production, leading, in one specific instance, to a policeman’s death that Bahrani sensitively addresses with the surviving family members. Though Davis asserts that a functioning vest wouldn’t have prevented the officer’s death, Bahrani retrieves the official autopsy that debunks his defense.

This kind of disagreement over facts occurs throughout Bahrani’s line of questioning, almost to a point of redundancy. Which is why when the documentary veers off course—it observes Westrick reunite with Clifford Washington, the man that nearly killed him decades earlier—it elicits its most powerful moment. The two men embrace and cry, realizing the scarred bond that forever connects them, and helped kickstart an unlikely industry. Both received a second chance at life, and so has Davis, who has returned to body armor production with his son long after Second Chance shuttered in 2005. Considering the ecosystem of impunity Davis cultivated during his reign, it’s the least surprising part of the documentary.