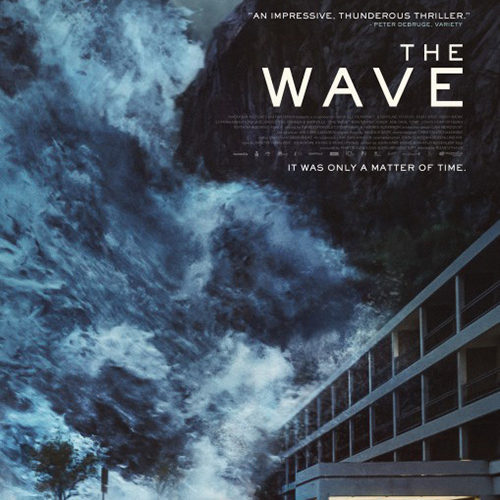 Over the past decade, Norway has managed to out-Hollywood the thrill-happy American film industry by producing their own big-budget spectacles. Works such as the 2010 found-footage oddity Troll Hunter, the 2009 dark horror comedy Dead Snow and its uproariously gory sequel, Dead Snow 2: Red vs. Dead, and the 2013 action-adventure film Ragnorak recall the finer qualities of big domestic blockbusters, only with the extra cinematic advantage of pristine, breathtakingly photogenic scenery.

Now comes Scandinavia’s first-ever disaster movie, The Wave, which is also notable for its director, Roar Uthaug, AKA the helmer behind the forthcoming Tomb Raider reboot. Based on his past credits, including the alpine horror film Cold Prey and the period thriller Escape, Uthaug is no stranger to crowd-pleasing genre fare, and his latest showcases his knack for utilizing familiar, tried-and-true tropes.

The film opens in Geiranger, a Norwegian fjord-side tourist town situated at the foot of Åkerneset, a mountainous region known for its instability. There, all the elements necessary for a bona fide catastrophe fall into place, as geologist Kristian (Kristoffer Joner) delays his departure for a new life in metropolitan Stavanger to warn his colleagues of an impending rockslide that, upon impact, would create a massive tsunami capable of wiping out the entire community. When his prediction comes true, he and his family, including his wife Idun (Ane Dahl Torp), his teenage son, Sondre (Jonas Hoff Oftebro), and his young daughter, have 10 minutes to reach higher ground before the wave hits.

The seemingly impossible stakes are but one aspect of a formulaic film lousy with homage. One scene recalls Apollo 13 when Kristian uses a simple visual tool (in this case, a stack of binders) to illustrate a major seismic shift.  The classic Jaws plot device also appears when initial attempts to forewarn and evacuate the townspeople are dismissed in favor of keeping tourist dollars coming in. To call The Wave a reliable disaster flick is putting it lightly, as it strives to provide all the underwater sequences, fleeing crowds, and human perseverance that define the genre.

Much like the 2015 summer trifle San Andreas, the film also heightens tension by exploiting the reality of its natural, still looming threat. Authentic archival images depicting aftermath scenes of Åkerneset-caused destruction grace the opening credits, obviously setting up all the delicious tragedy porn to come. When the big event arrives, it does so in all its CGI glory, washing away cars, houses, and people, and leaving a burning lake of death in its wake. The resulting action set-pieces benefit from decent effects and small details, such as a haunting wide shot featuring distant window lights being extinguished as water crashes down.

For all its intentions to satisfy, Scandanavia’s foray into this new territory is too by-the-book for its own good. Its strict adherence to the disaster formula renders the experience far too generic and risk-averse to make it memorable, and the predictability will surely leave pulses at rest as opposed to pounding. That the film broke box office records in Norway would suggest that there are more of these to come, so let’s hope the country’s next attempt finds its own voice.

The Wave opens in theaters and VOD on March 4th.