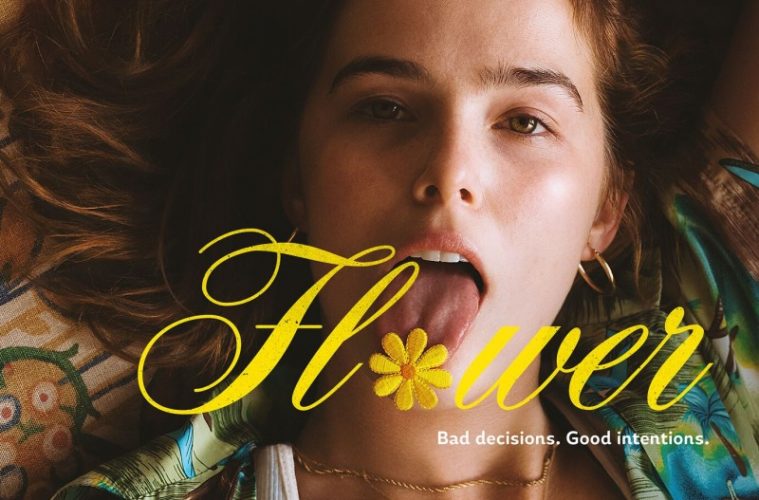 Review: The Twisted ‘Flower’ is a Great Showcase for Zoey Deutch, but Wilts by the End

Equal parts vulgar and endearing, Flower joins the ranks of recent female-led comedies such as Ingrid Goes West and The Edge of Seventeen that force you to empathize with the main character, regardless of how unlikable they may be. Though not as socially conscious as Ingrid and not as cohesive as Seventeen, Flower remains an inventive and surprising entry that appears to be very aware of (and even afraid of) its own boldness.

Flower revolves around Erica (Zoey Deutch), a promiscuous high-schooler whose main hobby is performing oral sex on older men and blackmailing them with her friends, with the goal of saving up enough money to bail her dad out of jail. As if that wasn’t ethically murky enough, her life becomes more tumultuous when her mom’s new boyfriend (the wonderfully awkward Tim Heidecker) retrieves his anxiety-ridden son, Luke (Joey Morgan) out of rehab. But what starts as a contentious relationship between Erica and Luke soon turns into a partnership as they put their combined talents to work and hatch a plan to get revenge on the man who allegedly molested Luke.

If that all sounds like a lot to digest in a ninety-minute period, it is. But even despite the ridiculous premise, the world that director Max Winkler creates feels authentic. The language of the characters is incredibly distinct, the environments tangible, and the natural progression of the story feels earned. And what keeps it all grounded is the ensemble of characters, each of whom feel like real people. Without the presence of Kathryn Hahn as Erica’s stressed out mother trying to keep everything on an even keel, Adam Scott as the alleged child fondler, and Deutch herself, this concept might have fallen apart. But as the narrative unfolds and it goes further down the rabbit hole of their scheme, it achieves an impressive momentum that lends itself perfectly to the type of unraveling story it tells.

The most unsettling aspect of the film is what ties it all together: a bizarre love triangle where every link is either illegal or frowned upon. The relationships between Erica, her new stepbrother, and the aforementioned Will (the accused sex offender) all pose questions of morality and legality, yet the film urges you to empathize with all of them. Winkler does an impressive job of juggling these connections and his continued insistence in pushing these scenarios will most likely alienate a good deal of audiences, but it’s nonetheless a great example of how this film dares to challenge the limits of empathy.

Unfortunately, Winkler is largely unable to stick the landing. Instead of finding a finale that matches its bonkers early portions, it pulls a deus ex machina that undermines the suspense. In turn, the script ends up mirroring the characters by being afraid of the subject matter that it presents in the same way that Erica and her cohorts are terrified of the consequences of their actions. One could argue that that is a deliberate choice, but it seems like more of a cop-out. And while the majority of the film is entertaining and something that can be separated from the pack, its final message feels confused and eyebrow-raising in the wrong way.

Even with the ways it handles some dicey thematic material, Flower is an engaging ride that largely serves as a vehicle for the excellent Deutch, and further shines the spotlight on telling stories about empathetic young women.