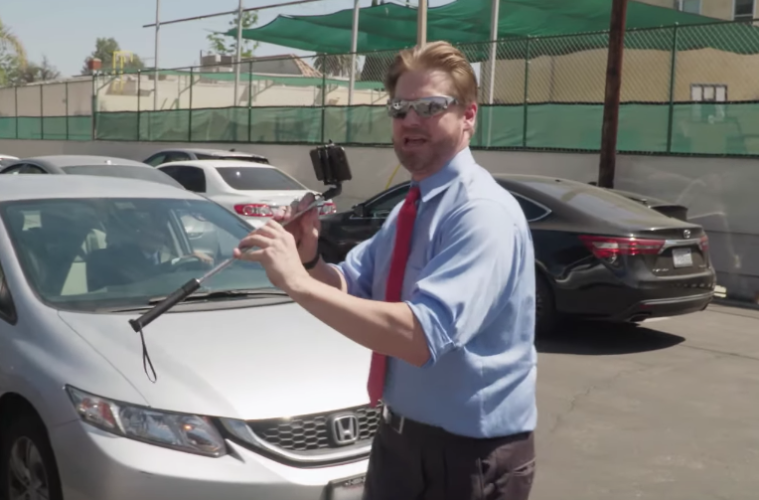 Ostensibly a parody of know-nothing movie-review culture couched in Tim Heidecker’s inimitable, increasingly prevalent “weirdness,” the long-running On Cinema gradually reveals itself as one of the great contemporary chronicles of obsessiveness, loneliness, greed, idiocy, evil, failure–the pillars of our existence. Were it only as funny as it is, I still wouldn’t be able to wait for Mister America, Heidecker and Gregg Turkington’s big-screen transition.

Directed by Eric Notarnicola, it follows Heidecker’s (speaking for his character) campaign for District Attorney of San Bernardino County following his acquittal of nearly 20 murder charges–itself the subject of The Trial, a mini-season that’s one of the most radical adaptations of a different form (here the televised trial) I’ve ever seen a work of fiction take on. (Sample it for even 30 seconds and you’ll get the idea.) Apparently turned from an Adult Swim movie to theatrical release in the belief it’ll play to a larger audience, Mister America marks, one thinks, a major venture for the comprehensive On Cinema project, and a preview has arrived in advance of the film’s release next month.

A freshman filmmaker follows Tim Heidecker during the final month of his campaign for district attorney. What begins as a profile of an outsider candidate facing an uphill battle evolves into a study of toxic delusion as Tim’s motivations and controversial past begin to unravel his candidacy. Taking on a popular incumbent has found Tim and his inexperienced campaign manager outmatched. Low on funds, experience, and connections, Tim hits the streets in an attempt to connect with voters, but has difficulty winning over the community. With word of his campaign spreading, former associates of Tim try to warn the public with stories of bad business deals, strained friendships and a failed court case in which he found himself accused of murder. With days until the election and his campaign in free-fall, Tim has to confront the unexpected costs of pursuing his dream.