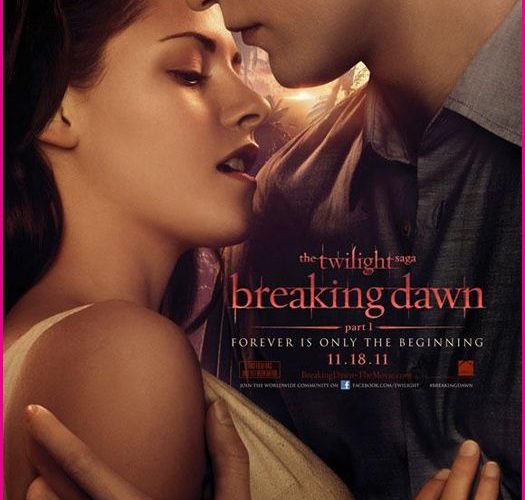 In which we learn, if you are a blood-sucking vampire who’s fallen in love with a young, beautiful, brunette human, has asked for her hand in marriage after pledging to wait until then to take her virginity, for goodness sake wear a condom! Because, as we all know, it’s better safe than sorry with these things.

It’s a crucial, oddly relatable mistake Edward Cullen (Robert Pattinson) and Bella Swan (Kristen Stewart) make on the eve of their honeymoon, resulting in a conflict so conflicting they had to break the fourth Stephenie Meyer novel into two, separate films.

The Twilight Saga is a strange one. While most franchises tire out both in profit margin and creativity, this one improves in both with each new film. Granted, its maiden voyage was one few film critics or cinephiles will ever forget, thanks to howler lines like “Hold on tight, spider monkey” and that sparkling skin effect. A brutally self-serious film, all of its humor felt unintentional while most all of its intended drama felt and sounded closer to something, well, already dead. Now, after four out of five movies, both the people behind and in front of the camera appear to be in on the joke, aware of how silly this melodrama plays on the silver screen. In turn, the laughs from those watching come easier and more often. Consider a scene in Breaking Dawn – Part 1, in which Bella, who’s half vampire/half human baby is literally sucking the life out of her (yep), says she’s cold and the ever star-crossed Jacob (Taylor Lautner) jumps out of his seat to warm his love up, declaring to the Cullen family, ‘I got this.’

Or how about the not-so-thinly veiled reference to Lautner’s recent actioner Abduction? Jacob shows up to Bella’s wedding late and she says, “You’ve been gone so long I was expecting to see your face on the side of a milk carton.” Chuckle.

Both Breaking Dawns are directed by Bill Condon, who feels like the best fit for the series. Not unlike (but much broader than) his previous films God and Monsters and Kinsey, the Twilight narrative focuses on sex and sexual repression and how it factors into each and every decision. And while this film disappoints in comparison to the merits of its director (just as Eclipse does with David Slade and New Moon does with Chris Weitz), Condon does not shy away from any of the ridiculous drama provided in the source material.

Lautner looks and acts more comfortably here than he ever has before, restoring a bit of the lost hope that came with the aforementioned Abduction that he will one day grow into a star. Meanwhile, Pattinson continues to offer that off-beat magnetism that has more-or-less carried the entire franchise. Condon gets both the strengths (the leading men) and the weaknesses (Melissa Rosenberg‘s script) of the film and navigates them wisely. Perhaps his only failed addition is his inclusion of werewolf voices.

And though there are still far too many characters that don’t do enough, one too many pop songs and plenty of dialogue to roll your eyes at, Twilight has been maturing, slowly but surely, and it’s hard not to notice this time around.