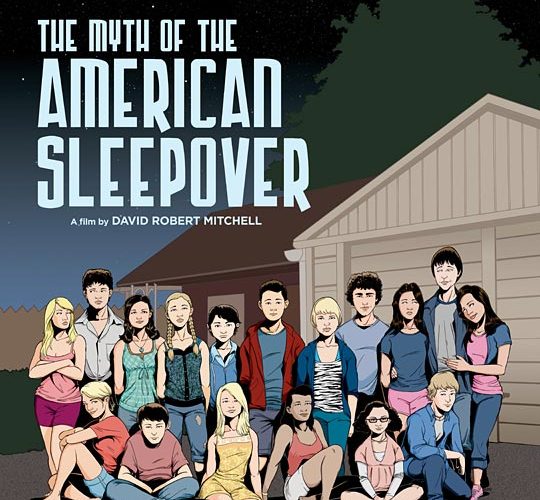 [Review] The Myth of the American Sleepover The feature debut of writer/director David Robert Mitchell premiered to acclaim at 2010’s SXSW fest, then went on to Cannes and Sundance, drawing praise along the way for its naturalistic slice of suburban teen life. As I’ve said before, nostalgia is big this summer, and The Myth of the American Sleepover is another feature that aims to pull you in by bringing you back to your youth.

Tonally, the film plays out like mumblecore for the teen set, thin on plot with naturalistic dialogue muttered by a slew of non-pro actors, and awkward camerawork that seems an afterthought to the understated emotion of the scene. That is to say – this coming-of-age drama is not for everyone. While many teen-centered dramas are full of high stakes, screaming matches and bitingly mature banter, Mitchell purposely rejects these pretenses to construct a dressed-down character-driven narrative. Here – with the use of an intentionally ambiguous era and vaguely formed characters – Mitchell provides a blank canvas to which the viewer is to project their own past and purpose. It’s an ambitious but tricky aesthetic for a new director, as the line between simple and lackluster is extremely difficult to walk. Personally, I didn’t feel Mitchell consistently succeeded. However, for all its stumbles, Myth does achieve some deeply evocative moments.

As you may guess from its crowded cast-featuring poster, Myth splits its focus among a wide range of characters over the course of the last day of summer. At the core of this ensemble piece is Maggie (newcomer Claire Sloma who possesses an undeniable screen presence much like mumblecore ingénue Greta Gerwig, and with a similar haircut to boot), a soon-to-be freshman who is a little overeager to dive into the high school experience, complete with late night parties at parent-free households, drunken games and older boys. Other subplots include one boy’s quest to track down the perfect girl who he idealized while checking her out at the local grocery story, a college student’s attempts to revisit his glory days by reconnecting with twins who once adored him, and one girl’s passive-aggressive revenge against the girl who tried to steal her boyfriend. With plots like this Myth is peppered with scenes that are painfully relate-able: being the third wheel while your friend flirts, admitting you like-like someone, scaring an obnoxious frenemy with a Ouija board prank, and so on. It’s in these moments that Myth shines, achieving a sense of grace while aptly capturing the alternating excitement and ennui that makes up much of adolescence.

In one particularly poignant scene, Maggie shyly flirts with an older boy (a junior!) and admits she blew off a sleepover and its requisite games of backyard tag to attend his party. In response, he surprisingly laments the impending end of his own childhood, and longingly confesses, “I miss tag.” This moment for me personally was the most profound. Here this teen isn’t even out of high school yet, but rather than gleefully rushing headlong in adulthood – like many of his peers – he takes this mournful moment to recognize what he’s losing: innocent, silly and childish fun. In this moment, the nostalgic tone works beautifully. Sadly, the nostalgia element becomes increasingly heavy-handed and eventually begins to bog down the proceedings.

However, my biggest issue with Myth is its pulled punches. Though the characters are surrounded by the threat of sex (masturbation, losing one’s virginity, cheating, attraction to someone new/else), Mitchell shies away from salaciousness even when it’s fully merited. Throughout the film boys look at girls and the male gaze is apparent as the camera lingers on a girl’s hand, lip, or ankle. The fact that these teen boys’ eyes (and by extension point-of-view camerawork) never move to more titillating areas seems disingenuous. But while the male gaze feels restricted, the female gaze seems devoid of any sense of desire. Though Maggie is the film’s central figure, and her quest is one of finding a boyfriend, she is never granted the kind of gazing POV the boys are readily (and repeatedly) offered. Yes, there are POV shots from her perspective, but they don’t search or linger as the boys’ do. Instead, these shots look without implying fascination, interest or lust. (Note to male filmmakers: girls ogle too!) And it’s this limited and puritanical perception that most frustrated me with Myth.

Yet, for all its faults, The Myth of the American Sleepover is a curious indie peppered with some truly striking moments that capture the anxiety and exhilaration of being a teen. It did take me back at times, creating an experience not unlike looking over an old year book where the details are foggy but the feeling is thick and enveloping. Personally, I’ll be curious to see what Mitchell does next.

Myth of the American Sleepover opens in limited release July 22 with a wider roll out in following weeks.