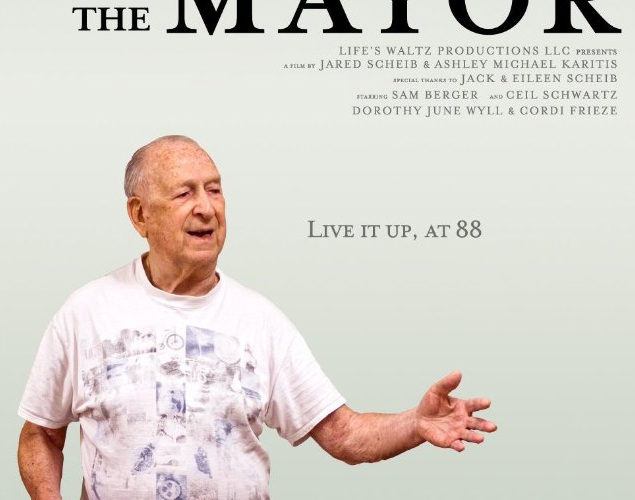 Rather than create some sort of exposé about the goings on inside nursing homes and the common belief it is inhumane, cowardly, and disrespectful to place your aging parents in one for their Golden Years, director Jared Scheib went in the complete opposite direction. Life couldn’t be better for the residents of the Dallas, Texas independent living facility at the heart of his documentary The Mayor. Sure many are widowed, depleted of all sexual drive, and immobile without the help of canes, walkers, or wheelchairs, but none of that means it is time to give up. There are plenty of years left for having fun, making friends, and laughing through it all. Some, like Sam Berger, even get a chance to reinvent themselves and start a brand new act just as good as the first. Eighty-eight year old Sam “The Mayor” is a romantic through and through who loved his wife and never had any reason to stray. When she passed he simply went on with life as he had, living self-sufficiently without realizing how alone he was becoming. He’d try to date with the casual pick-up line in public, modest and cautious like the majority of us are, never anticipating the unbridled confidence soon uncovered when moving into the community he now calls home. It was here that he discovered how in need of human interaction he was and where all inhibitions disappeared. Earning his name for knowing almost every one of his neighbors and for keeping tabs on the comings and goings whether deaths, hospital visits, or newcomers, Sam found a new lease on life and is enjoying every second.

But while I anticipated the film to center solely on his activities, it was a pleasant surprise to find the camera also following the charismatic Ceil Schwartz and Dorothy June Wyll. Two women Berger hadn’t a chance with—married and loyal to her deceased husband respectively—they are able to carry on candid conversations about romance, relationships, and the naked truth of growing old. They help make up the trio Scheib uses to capture an all-encompassing look at aging and its infinite trials and tribulations. From a lack of sexual desire to the gradual erasing of memory to the waning seconds on the clock preventing actions that aren’t one hundred percent wanted, life after sixty appears like high school in a way. With only an expiration date starring them in the face, the elderly are once again able to be selfish. Honestly, what else is there besides happiness? Ceil and husband Ed enjoy each other’s company with humorous jabs and unwavering candor. Dorothy remains vigilant as far as making herself up and refusing to partake in plastic surgery. Sam falls into devoted love, already staying by a newer girlfriend’s side until her death and now engaged in a new relationship with the sixty-years young Cordy Frieze. It is here where we discover how necessary companionship is to one’s wellbeing. Sam and Cordy see each other every day, exchange declarations of love with a kiss, and laugh as though they cannot stop. But even in the most idyllic of couplings come moments of difficulty. They keep their relationship a secret from their children and the pressures of not wanting to let the other down becomes a detriment to their own vitality.

The Mayor isn’t the most polished of films, nor does it provide more than a snapshot of life behind closed doors for seniors no longer needing to engage with the outside world. What it does give is an unfettered authenticity that may surprise you. With gossip running rampant, break-ups caught on camera, visits to the cemetery for state of the union updates, and tears flowing from the recollection of days past via family videos, these men and women are your parents and grandparents just as they are mine. Not one moment rings false, even when Ceil berates Ed for answers to personal questions he refuses to reply to or look at the camera for. Each character lets his/her unique personality shine through the artifice because they’re too old for lies. Besides blow-ups at bingo, cute little Marguerite Gulbis waiting patiently for two hours before her hair appointment, or ambulances transporting anonymous folks on stretchers, a near minute-by-minute depiction of Sam’s morning becomes a riveting finale. From waking up, using the bathroom, and preparing himself with a shave and comb to the portioning of pills, strenuous exertion pulling up his socks, and heavy breathing while looping his belt, this is a lengthy production we can’t fathom will soon be our own routine. It’s a trying experience we’d all do in a heartbeat as long as we still can and just goes to show how miraculous Sam’s jovial demeanor truly is. It would be so easy to simply give up and await the end, but it’s so much more fruitful to continue living without hesitation.

The Mayor is now on VOD and continues to screen throughout the country. Find out more details here.