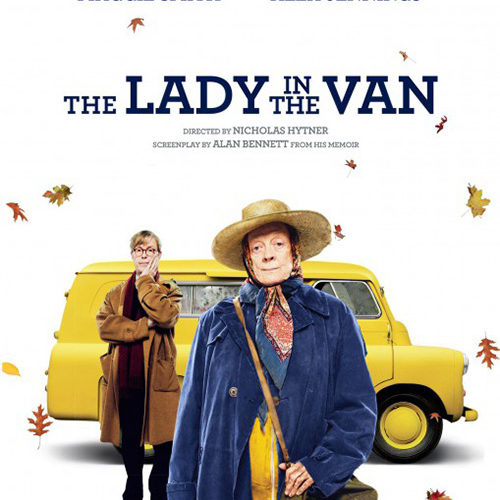 [Review] The Lady in the Van

Let’s hear it again for Dame Maggie Smith. Although she’s captured audience attention playing all manner of fussy upper-crust elitists, including Downton Abbey’s sniping Lady Grantham, the 81-year-old actress has a sensitivity of range and feeling that can be occasionally overlooked because of how good she is at what she does. Despite the fact that recent years have often given her parts that might read like ‘Michael Caine with ovaries,’ Smith continues to display a knack for character sympathy (even when said characters are not, themselves, sympathetic) that allows her to bring a startling array of fascinating people to life. With Nicholas Hytner’s The Lady in the Van, adapted by Alan Bennett who also wrote the play and lived out the ‘true’ elements of its story, Smith takes a role she’s done on stage and radio and brings her own internal regality to Miss Shepherd, a woman whose life has very few vestiges of anything remotely regal left in it.

Smith’s Miss Shepherd is that kind of creature that seems almost too perfectly eccentric to have ever really existed; both literally and figuratively crusty, she’s a transient bag lady living in a broken-down, damaged van who purposefully positions herself as an eyesore on tidy little British suburbs, all the while possessing a riveting past of accomplishments and secret tragedies those meeting her could scarcely guess at. When Bennett first crossed paths with her in 1970, she ended up squatting in his driveway in North London. Fifteen years later, due in part to Bennett’s own creative curiosities as a writer and Shepherd’s willingness to hang-on in the spot, she was still there. The film version, cheekily referring to itself as a ‘mostly true story,’ dons a purposefully Brechtian overcoat, giving us two Bennetts who roam the North London townhouse together (one for the writing, one for the living), and stuffing in some purposefully contrived fantastical overtures just because the playwright has deemed such fancies necessary. This is less the surrealistic existentialism of Charlie Kaufman, though, and more just an extension of the definably British eccentricity that the whole enterprise wants to honor. Through it all, the film stands squarely on Smith’s extremely capable shoulders.

Although one might look initially at Shepherd and see a Dickensian caricature carved by Bennett from the unfortunate ruin of the real lady, Smith supplies her with such a presence and personal dignity—buried under mounds of glad bags, grime and excrement—that she never seems anything less than plausible and authentic. Although she frolics about with more toilet talk than one expects in an Adam Sandler comedy, Smith allows Shepherd to retain a sense of self that elicits compassion, not just from Bennett, but from the audience as well. We don’t quite know initially how this once concert pianist and nun (yes, nun!) came to be living in such squalid conditions, but we understand that her survival and reliance upon strangers comes primarily from her own pervasive will.

That will of Shepherd’s gets launched at all comers, as Smith confronts kind neighbors bearing presents with haughty disdain at being intruded upon; as passer-bys are observing the bags of crap none-too-tidily stuffed under her van, she’s explaining to them that she is usually very clean, even having received an award for cleanliness once. Indeed, it’s Smith’s refusal to let Shepherd ever be seen as cute, unfortunate, or some kind of hoary plot device that enlivens and enriches Bennett’s careful study of her character. Even when the film begins to indulge in excessive whimsy—God himself shows up in a Monty Python-esque cameo—there’s no question that in Shepherd, the film has touched up a real vein of honesty.

Hytner, who has less experience with this material than Smith and Bennett, brings a depth and playfulness to the film that helps air out some of the mustier parts of the play, and he manages to balance the fecal drama playing out in Bennett’s driveway with a sense of mystery related to Shepherd’s questionable past. One of the stronger choices is casting Alex Jennings as both versions of Bennett, not least because the actor perfectly captures the playwright’s fastidious loner tendencies and his sense of wit and expression. The movie could have easily been sunk by the twin gimmick, but instead the disparity between Bennett’s sparring halves does much to reaffirm the story’s themes of charity and creative discord. Jennings gives empathetic ear to Bennett’s own questions about why he’s taken on this fetid old crone; is she really surrogate for a mother he’s unable to keep out of a nursing home, or is she really nothing more than an “odiferous” fount of theatrical inspiration? The camaraderie and sometimes chaos that brews between Jennings and Smith is also a joy to behold, and there’s one particularly poignant scene late in the film—once many of Shepherd’s carefully constructed defenses have been downed—that demolishes with its emotional effectiveness.

It must be said that there’s still a decent amount of fat on Lady in the Van, and the film could have probably used trimming in regards to some subplots that feel vaguely realized. Bennett’s love woes with a series of young men (Shepherd thinks they are communists since they are only show up at night) and Jim Broadbent as a bullying figure from Shepherd’s past never quite register, and only distract us from the central drama. In other ways, though, Hytner nails the melancholy that hovers over Shepherd and her dilapidated vehicle. The film’s opening is startling in the way it juxtaposes a violent interlude on a country road with serene concert footage, all the while creating a beautiful encapsulation of the forces that war within Shepherd, and have, in some way, brought her to her current state. Without losing sight of Smith, he also expands the frame to include not just Bennett, but an entire community who come to accept and engage Shepherd. Without slipping into mushy sentimental overtures, the movie has something real and immediate to say about the power of compassion and the way we can also become recipients of its power when we bestow it upon others.

The Lady in the Van is now playing in limited release.