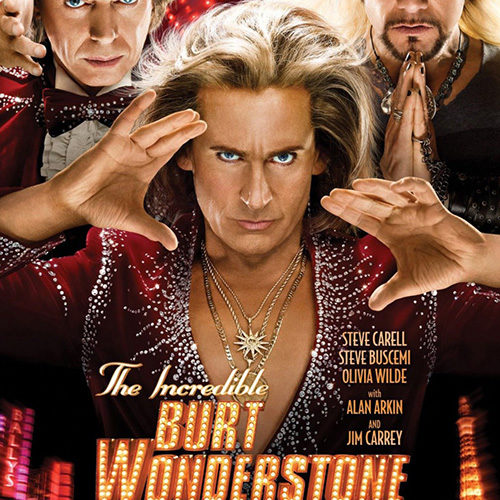 In 2006, movie goers experienced a fantastic double whammy when two similar magician films, Christopher Nolan’s The Prestige and Neil Burger’s The Illusionist, squared off against one another. Neither of the releases were runaway hits, and Hollywood’s brief fascination with mysterious prestidigitators quickly vanished. After several magic trick-free years, the industry is giving the subject another chance, only this time it’s foregoing the dark drama of Nolan and Burger for lighter fare, most notably in the young, sexy thriller Now You See Me. But before that appears, the big screen gets the Gob Bluth treatment in the comedy The Incredible Burt Wonderstone.

In television director Don Scardino’s feature debut, Steve Carell plays the titular character, a Vegas magician spoiled by fame and fortune. He headlines the most popular show on the Vegas strip, where he shares the stage with his partner of thirty years, Anton Marvelton (Steve Buscemi), a meek pushover who sticks with their act despite his obvious misery. Their glittery costumes, stilted rapport and cheesy illusions continue to fill seats, until a Criss Angel-type street magician named James Gray (Jim Carrey) begins attracting crowds with new, more disgusting entertainment. When he can’t compete, Wonderstone soon finds himself alone and unemployed, until a chance encounter with his idol, a veteran performer named Rance Holloway (Alan Arkin), forces him to re-discover why he studied magic in the first place. With the help of their former assistant Jane (Olivia Wilde), Wonderstone and Marvelton return with a trick guaranteed to wow audiences and get them back on top.

In a fluffy, formulaic comedy such as this, much of its appeal relies on the performances as opposed to the predictable plot. One of Carell‘s greatest assets is his ability to make people love his characters, no matter how insufferable or inconsiderate they may be. If any experience honed this talent, it was during his numerous seasons playing boss Michael Scott on The Office, where his antics, which ranged from the discomforting to the criminal, were often forgiven in one humanizing moment.

As Wonderstone, a man so vain that he constantly wears stage make-up, the boundaries of Carell’s ability are tested in a role that comes off more annoying than delightful. As opposed to balancing out the obnoxious levels, the Crazy, Stupid, Love. actor spends most of the film indulging in his usual shtick, making Burt a berating, pompous jerk who seduces women by bragging about having the “biggest bed in Vegas.” By the time his moment of redemption comes around, the result feels forced and completely unearned.

In terms of routine, however, Carell must compete with the rubber-faced Carrey, who gladly ramps up his signature brand of physical comedy as the tattooed, body horror-obsessed Gray. It’s enjoyable to a degree, as his extreme stunts – which include hammering a nail with his head and acting as a candy-puking human piñata –  bring another level of slapstick to a movie where humans and pants routinely fall down. The two also deliver a few humorous interactions that riff on their equally oblivious personalities. “That guy’s a magician? He doesn’t even have a costume,” the bedazzled Wonderstone comments at one point, failing to realize that Gray’s grimy duds are his costume. Yet as Carell and Carrey bring their somewhat tired A-game, the funnymen are often overshadowed by an array of scene-stealing co-stars. As the one with most screen time, James Gandolfino shines as Doug Munny, a gruff casino mogul who’s a cross between Donald Trump and a Scorsese character. Jay Mohr, a comedian whose movie career has waned over the past decade, relishes his few moments by generating plenty of laughs as a pathetic low-grade magician with the awesomely terrible stage name of Rick the Implausible. But it’s the 78-year-old Arkin who pleases the most as Holloway, following up his Oscar-nominated turn in Argo with his timeless, deadpan humor.

Wilde adds the most interesting element to the film, however, when it’s revealed that Jane is an aspiring magician. Her struggle to break into a male-dominated profession barely registers on the plot’s radar, but it’s intriguing nonetheless. Why aren’t there any famous women magicians? And why not focus on her story instead of churning out another mediocre, forgettable comedy like Burt Wonderstone? If this magic trend continues, let’s think a bit more outside the box.