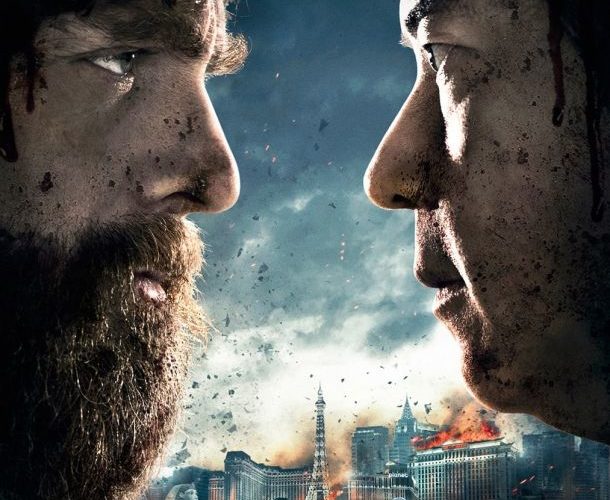 Wait, what’s going on here? Is this really a Hangover movie without a hangover, sans a berserk premise, absurd sight gags, and lacking anything that resembles a hearty laugh? Yes, I’m afraid it is. After copycatting his 2009 hit’s structure nearly joke by joke with the first sequel, Todd Phillips has admirably attempted to take the series in a fresh direction for the third, making the obvious mistake of thinking this needed to be a series at all.

The Hangover Part III seemingly misunderstands the appeal of the initial scenario, and assumes that we find these characters lovable or relatable and want to see them in a film that tries to deal with their neuroses in a cathartic way. In truth, the real catharsis was for audiences of the original, watching these over-privileged yuppies come undone at the hands of their own avarice during a long, wild weekend in Vegas. The first movie was lighter than it would have had its fans believe, and more reserved too, although it found plenty of ways to tug some big laughs from us. The third installment is so dedicated to being different, that it comes off like a clueless sequel from the 90’s that thinks cashing in on a name and a cast is enough to draw crowds. Right, because that worked so well for City Slickers 2: The Legend of Curly’s Gold.

Phillips starts with an ill-fitting spoof of The Shawshank Redemption framed within a Bangkok prison break, and uses boy-band Hanson as a transition to Zach Galifiniakis’ Alan involved in highway shenanigans that result in the deaths of a giraffe and a minor returning cast member, in that order. The fallout from that event causes the rest of the Wolf Pack—Stu (Ed Helms), Phil (Bradley Cooper), and Alan’s brother-in-law Doug (Justin Bartha)—to stage an intervention for their socially precarious friend, who has gone off his meds and is careening towards mental instability at an alarming rate. This is the motivation for getting all four guys back in the mini-van together, which is promptly hijacked by crime lord Marshall (John Goodman) and his lackey Black Doug (Mike Epps) who kidnap the Wolf Pack and give them a ruthless ultimatum. Seems their old nemesis Leslie Chow (Ken Jeong) stole gold bullion from Marshall and his men, and now that he’s in the wind, Alan and the gang are the best chance of finding him. For collateral, Marshall takes Doug and threatens to shoot him if the feisty Korean isn’t delivered in three days. So begins another contrived quest to save Bartha’s life, while the actor spends another entry on the bench.

There are myriad problems with The Hangover Part III, but strangely, almost none of them are issues one would have predicted based on the second film, which committed a whole other arsenal of mistakes. The entire conceptualization of the movie is off; this is Alan’s story really, and his problems have grown to such a degree that they aren’t just the antagonizing slob antics of a John Candy or a Chris Farley anymore, instead blurring the line between manic-depression and actual sociopathic tendencies. Over the course of the film Alan tells a world-shifting lie to a four-year old, brags about ‘masturbating on public transportation’ and bonds with a deranged pawn-shop owner (Melissa McCarthy) over mental and physical abuse to elderly parents.

What’s most odd about all of this is that Phillips—who must have had Galifianakis show him The Comedy, that savage work by Zach’s transgressing artist pals Tim and Eric—decides that he doesn’t think much of this is funny either, and if the movie doesn’t adopt a more mature slant, it certainly achieves a darker one, that occasionally delves into just how dysfunctional Alan, and by extension Chow, really are to the world around them. Whereas The Comedy was fearless and even insistent about revealing how this new bully humor infects the world-view of stunted adolescents like Alan, Hangover mostly uses it as a way to try and keep Galifianakis’ rabid little hobbit relevant for at least one more picture. This dark slant, which sees Chow develop into a cold-blooded killer with serious toys in the attic, doesn’t add anything genuinely surprising though. Every time the new perversity suggests we might find something that will shock or humorously disturb us behind several of the un-opened doors in the film, Phillips pulls the rug out from under us and keeps the last part of this unwanted trilogy sailing the same seas of mediocrity that Ocean’s Thirteen rode to obscurity. Positing Alan and Chow as the stars of the show seems like a nifty structural change, but it’s ultimately debilitating to the film’s momentum and theme. These two are unbridled agents of chaos, classic trickster outcasts who don’t even really want to be understood, and as irritating as they were before, suggesting we climb inside their brains and craven world-views is even less appealing. It also doesn’t help that Jeong and Galifianakis are entertainers with a very small niche of expertise, and most of that amounts to being aggressively uncomfortable. Meanwhile, Helms and Cooper have truly grown as actors and stars since the original and instead of commanding the stage, are basically running around like Han Solo in Return of the Jedi, trying their best to manage their own maniacal Ewok in tight-fitting hot pants. Goodman and the other secondary players try and manage some dramatic tension but they are solely placeholders and barely register at all.

It must be said again; the inexcusable crime of The Hangover Part III is that it simply isn’t funny. There are a few chuckles and smiles, mostly summoned by the quickly-evaporating fumes of the original’s goodwill, but not once is there the kind of wild, surreal jolt that arrived with frequency the first time around. Todd Phillips has said just about all I suspect he can about the present state of the man-child and should probably move on from this particular theme.  To be fair, after enduring about ninety-minutes of allegedly comic tedium, even Alan decides that this particular lifestyle is only headed for burn-out and heartbreak. Despite what the sloppy after-credits scene suggests, this should absolutely be the last howl of the Wolf Pack.

The Hangover Part III hits theaters on Thursday, May 23rd.