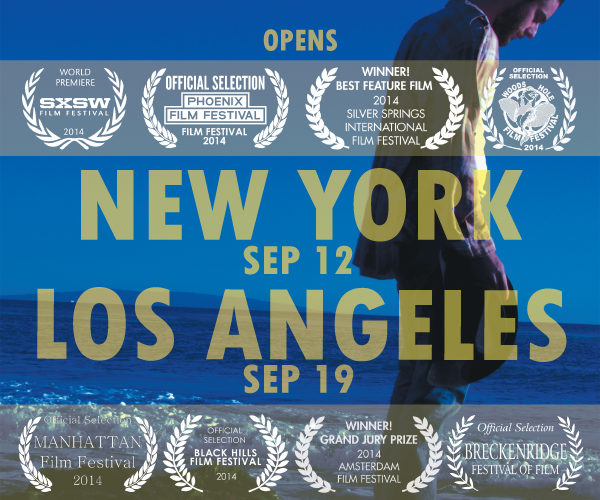 Despite an opening suggesting we’re in for a meticulous modern Western, The Frontier, directed by Matt Rabinowitz, embodies the mood, atmosphere and longing found in the best of that genre. Transferred into that all-too-familiar indie genre, the contained drama (see Lullaby, About Alex and The Big Ask), Rabinowitz and co-writer Carlos Colunga offer a little new spin on the father-son dynamic.

Coleman Kelly stars as Tennessee, a rancher whose called back his family’s seaside bungalow to make piece with his estranged father Sean (Max Gail). Sean has recently moved in with a pretty young personal trainer/personal assistant from Russia, Nina (Anastassia Sendyk). Sean, like Tennessee, is a stubborn man. The film juxtaposes the solitary actions of work as Sean is an academic on the verge of checking out of the university system in the wake of such inventions as MOOCs and the flipped classroom, while Tennessee works quietly and passive aggressively with his hands. The elephant in the room is the death of Alice; ignored by husband Sean, she is found some time ago by Tennessee. As explained by Sean, “When she left, the house got quite and so did my son.” The frontier they must transcend becomes all too apparent. Rabinowitz and co-writer have borrowed scrap parts from other indies and westerns, achieving from scene to scene several tender moments that work. The drama resolves itself just as it ought to and right down to a third act that is predictable and a little messy. On one hand, it was a bold choice to shift the narrative with a reliance upon voice-over and a letter that wraps things up maybe a little too neatly.

The Frontier is one of those films we watch on the edge of our seat. Sometimes it edges towards something rather complex which requires an elegant and original resolution. While certain recycled parts are assembled in unique ways, the film gets away from Rabinowitz with a resolution that feels out of place. With strong moments, good performances and some restraint, the fatal flaw at the core of the film is Nina. A presence that never quite works, she’s a personal trainer brought on board by Sean to take dictation as he writes a new book. Never an equal member of the ensemble, Rabinowitz’s indifference to her is confusing. Without her presence, The Frontier might have made for an excellent, intimate short. Instead this feature is unfortunately a character study that doesn’t quite work.

The Frontier is now playing in New York and opens in LA on September 19.