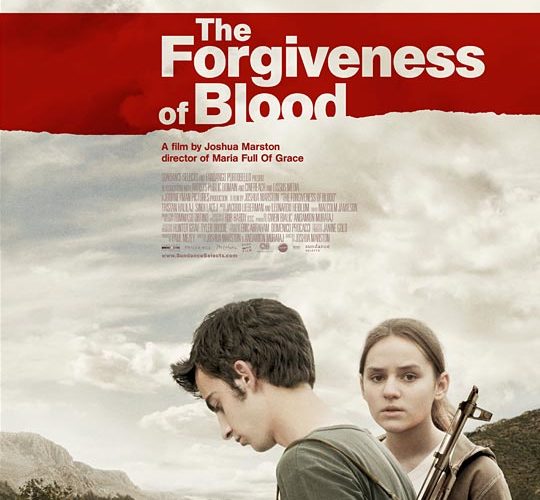 [Review] The Forgiveness of Blood

Humanity itself is a combination of two divergent forces: reason and fury (at least that’s what The Tree of Life teaches us). These are two states of being that do not walk hand-in-hand, but they can feed into each other to dangerous results. When we act impulsively, any forethought is temporarily tossed to the wayside in order to defend ourselves, or to get even. But when enough acts build up to where a brash action is backed by reason? That’s when the trouble really begins. And that is where we meet The Forgiveness of Blood, Joshua Marston‘s follow-up to his acclaimed debut, Maria Full of Grace.

The Forgiveness of Blood is a film 6oo years in the making. Nik (Tristan Halilaj) lives as an average teenager, living in Northern Albania. Like all teenagers, he has escape on his mind. He’ll get lost in PlayStation 2 soccer games, riding around aimlessly on his friend’s dirt bike, trying desperately to get the attention of the girl he likes, and going to the cyber cafe to work on a computer as old he is, as the newer models in the school are useless if you don’t have power (a seemingly recurring issue). He tolerates his younger sister Rudina (Sindi Laçej), a hardworking student, knowing that he’ll be on his way out the door soon enough and her nagging about pulling up the sleeves on his track jacket to impress a girl will be a thing of the past.

At least he hopes. In a village that features paved roads and cars, his father, Ded (Çun Lajçi), delivers bread in a horse-drawn buggy, beaten up and decrepit, as a means to pay the bills. The end of his route would ordinarily go through a track of land his family once owned, but after a bitter dispute, it went to his neighbors. They cruelly–arbitrarily–refuse to let him use the shortcut, elongating the route considerably. After taunts and chest-puffing, Ded and his brother Zed get into a confrontation with the man and end up killing him. Whether or not it was in defense or aggression we do not know, nor does it matter. Ded goes on the lamb while the aggrieved family enters into a blood feud, based on the centuries-old laws of the Kanun that are still in practice in the area.

The rules are as simple as they are complicated: for one life, there must be another. With Ded on the lamb, the next life to be sacrificed would be Nik, the eldest male. But, in an odd twist, the family’s home is a safe zone, a much more bloody version of the “BASE!!” rule in tag. This proposition seems to have no expiration date, as one of Nik’s classmates was pulled out of school for seven years until the feud was mediated and ended. So Nik, the boy who dreams of running away, is locked inside with his two youngest siblings, as Rudina is sent out to fulfill the bread orders and feed the family.

After a somewhat fast-paced open, we get to trudge through the this dull existence right along with our hero. Watch as he stares blankly at a television screen! Notice how he has to make his own weight-lifting equipment on the roof! See how he builds walls around it, sheltering himself from the world, creating an outdoor prison that is slightly better to live in than the enclosed one he lives in! The biggest action beat occurs when Nik grabs a knife and cuts the wall in his room up in anger. His family comes rushing in, with the knife hop-skipping between hands. Then the scene ends. Marston wanted to capture what it is like to be hopelessly caught in a blood feud and he succeeded. Despair and helplessness rule the day, as expressed in the wonderfully blank faces of Halilaj and Laçej, two novices plucked from their high schools who suddenly have budding acting careers. There is no shortage of pathos provided from these two young leads throughout, aided in lock step with the rest of the talented, indigenous cast. The cinematography from Ron Hardy is superb and the eerily quiet sound design from Rich Bologna is eerie and silent, which strikes the perfect note. Technically, it’s a well-produced film.

However, films are to be seen. On one hand, The Forgiveness of Blood effectively does everything that it sets out to accomplish. The script, co-written with Andamion Murataj and winner of the Silver Bear for Best Screenplay at the Berlin Film Festival, has to mix absolute stasis with dramatic stakes. While true to life, that combination does not lend itself to a compelling film watching experience. It is a movie with many intriguing ideas that I would much rather read about than experience sitting in a movie theater. Poor Nik had to have his father commit a murder in order to live out this existence. All you have to do is go to your local indie house and plop down ten dollars. I’m not sure who ultimately pays the bigger price.