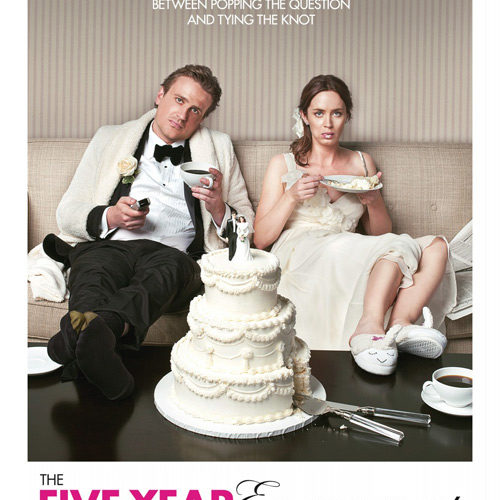 Writer/actor Jason Segel and writer/director Nicholas Stoller have been working with each other for years now, both cementing their membership in Judd Apatow‘s comedic entourage on “Undeclared”. It was their first cinematic collaboration—Forgetting Sarah Marshall—however, that put them on the map as a creative team worth keeping in the recesses of your mind for light bulbs of clarity to illuminate when hearing their names in trailers. The film was a perfect mix of charm, hilarity, and crude behavior that was sadly unmatched with Stoller’s solo endeavored sequel Get Him to the Greek‘s lack of story and their partnered script for The Muppets entrenched with a thirty year tradition. As a result, The Five-Year Engagement had its work cut out for it to prove their debut wasn’t a fluke. All trepidation washed away, though, as the opening frames showed Segel’s trademark gentle giant’s insecure nerves, stumbling through a romantically orchestrated proposal. His Tom Solomon and Emily Blunt‘s Violet Barnes drive the streets of San Francisco on New Year’s Eve to her sister’s party before the not-so-soon-to-be groom awkwardly reads from a pre-planned script about forgotten work receipts. Hijinks ensue with the help of bone-headed friend Alex (Chris Pratt) and we’re soon sent back one year to experience the love at first sight moment meeting at a costume party dressed as ‘Super Bunny’ and Princess Diana and acknowledge their claim of coupling perfection. But unlike the standard rom/com—the conventions of which still hold true here—soulmates possess their fair share of problems too.

The title doesn’t mislead as the film spans their five years from engagement to nuptials. Yes, it contains its own spoiler for those naïve enough to think the end result will be anything but obvious. Get over this fact and accept it’s less a romance of ‘will they’ or ‘won’t they’ than the journey along a bumpy road of compromise and sacrifice. Time passes by the deaths of grandparents while bitterness and regret set in as one’s dreams are achieved at the detriment of the other’s. What was to be a two-year stint in Michigan so Violet could cut her teeth in the world of academia before a return to the Bay Area so Tom could open a restaurant becomes a prolonged purgatory where she puts work above love and he watches his kindness and misguided optimism erect an impenetrable prison.

The two find themselves in a roller coaster of highs and lows as wedding plans start and stop with each life change. Whether a move, promotion, anger, or love’s straying eye, a wedge drives them apart and frustration sets in for all—including the families made to wait. Tom’s (Mimi Kennedy and David Paymer) and Violet’s parents (Jacki Weaver and Jim Piddock) remain in stasis with each party and dress rehearsal ending in another year of anticipation while he becomes a mead-drinking hunter and she a promising researcher finding her collegiate experiment spilling over into real life. By testing the emotional instability of test subjects, she soon discovers how far her fiancé has fallen from the ambitiously successful chef she once knew.

The comedic antics resulting from Tom and Violet’s struggles may never lack laughs, but they do find themselves ever so tedious enough to make the middle portion of the film drag. We watch so many incremental moves as Violet rises and Tom falls that I began to fear the plot would somehow accidentally find itself disseminating a message of how men work and women stay home. I think Segel and Stoller’s goal is to subvert that archaic claim, but the sledgehammer used to flip these stereotypical archetypes risks doing the opposite more than once. It’s tough to depict a relationship where both halves are successful in career and love—especially when you need conflict to breed humor—so it’s unsurprising that one must hit rock bottom before realizing change is necessary. Luckily a fantastic supporting cast is onboard to help get through the trials and tribulations of our monogamous pairing. Michigan brings the one-note absurdity of Chris Parnell and Brian Posehn to make Segel’s Tom seem less pathetic while Blunt gets eccentrics Mindy Kaling, Randall Park, and Kevin Hart as her psychology study buddies. Each ‘friend’ packs a potent punch of singular crazy to take the pressure off and give our leads someone to unload problems upon and create possible emotional and physical solutions. Add in Rhys Ifans‘ suave professor and Dakota Johnson‘s minx with an Energizer Bunny libido and you’ve got the missing pieces to Tom and Violet’s relationship puzzle. The question then becomes whether ninety percent perfect is better than finding a willing partner to fill the superficial void.

The real clutch performers, however, come in Segel and Blunt’s right-hand companions. Chris Pratt is gold from start to finish with a performance that must have included some improvisation. His timing is spot-on and his character’s inability to filter thoughts never ceases to conjure laughs. Partner him with Violet’s sister Suzie (Alison Brie) and you could leave the rest behind. Brie is an emotional wreck in the best way and the two together serve as a weird mirror for our main couple to aspire towards. That reality is just crazy enough to accept and the comparison allows them to keep us in hysterics with the likes of Pratt’s emphatic Spanish serenade and Brie’s cutely endearing and inappropriate airing of grievances as Elmo to Blunt’s Cookie Monster with children giggling by their side.

At the end of the day, Segel is one of the best everymen working today and Blunt continues finding a way to work beyond her stunning beauty in order to become the attainable ideal woman men everywhere hope to find. They’re a cute couple deserving happiness—with each other or without—and while a snowy Michigan backdrop may not have the same allure as an exotic Hawaiian locale, the love shared here is on par with Forgetting Sarah Marshall‘s Segel and Mila Kunis. We want his oafish nice guy to be happy and he writes himself in a way to make the process hide its contrivances. Focusing on the imbeciles surrounding him definitely helps, but his absolutely relatable portrayal goes even further.