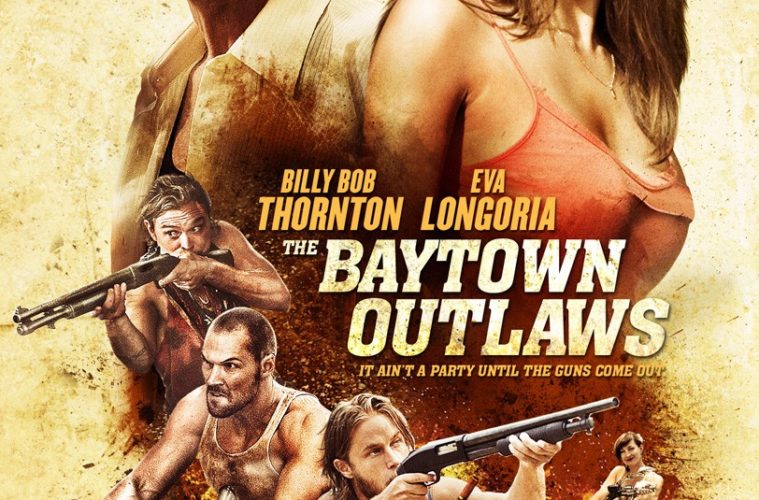 Who wants a little Southern fired cooking? I know ATF Agent Reese (Paul Wesley) from Chicago doesn’t. He can’t even find an anti-perspirant strong enough to save his button-down shirt from drowning. No, the heat and the culture is an acquired taste best instilled during youth so it can become infused into one’s blood like the Oogie brothers. For Brick (Clayne Crawford), McQueen (Travis Fimmel), and Lincoln (Daniel Cudmore), Alabama is a candy store and they are the kids. Redneck vigilantes with a penchant for violence, they clean up the criminal element for local Sheriff Millard (Andre Braugher) so as to alleviate unseemly paperwork. He allows them to murder bad guys with impunity and they keep his county’s statistics to a minimum. A mistake was bound to occur. The feature debut of director Barry Battles and cowriter Griffin Hood, The Baytown Outlaws opens with this very error. The Oogie boys are introduced rolling up on a house of dangerous men in need of a lesson the law simply takes too long to give. Mentally imbalanced sociopaths all, they engage in a dance of explosive bullets, stabbing knives, and brutal carnage that’s only trumped by their stunning lack of intellect proven via an envelope on the victims’ kitchen counter. These Einsteins hit the wrong house, massacred the wrong criminals, and brilliantly gave the government a reason to send Agent Reese down for an encounter with local police. And rather than lay low like any sane person while Millard ran interference, the Oogies decide to also freelance a spell in Texas.

In what Brick calls a simple smash and grab, he accepts the twenty-five thousand dollars a woman named Celeste (Eva Longoria) offers and rallies the troops to kill her ex-husband and kidnap her Godson. Unfortunately for the siblings, this worried Godmother left out a couple of important details. One, Rob (Thomas Brodie-Sangster) is a mute, almost eighteen-year old wheelchair-saddled mentally handicapped young man. Two, Carlos the ex (Billy Bob Thornton) is an easily riled up and ill-tempered drug dealer with grand ideas of becoming a kingpin. So, not only are the Oogies hunted by the ATF, forgotten by Millard, and hampered by brains devoid of firing synapses, they also have an incensed mad man recruiting minority hit squads to retrieve the boy and leave them for dead. It’s an insanely convoluted plot full of throwaway characters, stereotypical nonsense, and impossible odds for survival. The catch is just how over-the-top fun it all is. If you don’t have a smile after the unnecessarily animated credit sequence you should probably just go home because it won’t get any better. However, if you are smiling or decide removing the stick from your backside is an appealing option so you can, you’re going to have a darn good time. After all, The Baytown Outlaws is pretty much the Tremor brothers from Smokin’ Aces wreaking havoc and discovering their hearts can extend beyond family. Or as my girlfriend commented, Brick and McQueen are like Tim and Billy Riggins if football didn’t keep them in school past grade five. (Side note: the Friday Night Lights reference was priceless to this end.)

I’ll paint a picture—something Battles tries to do through another distracting comic book interlude. Brick is the brains, Lincoln the brawn, and McQueen the imbecile keeping them on their toes. The former and the latter will have you on the floor laughing courtesy of their bickering while the silent brute must converse through facial expressions and a beat-up Speak & Spell. They are an eccentric bunch of white trash hooligans who accept a soiled Hawaiian Punch t-shirt and Confederate flag tank top as appropriate fashion sense and who sadly cannot control themselves when money or sex is up for grabs. It’s a mix of Southern phrases, pop culture education, and full-blown stupidity getting them into and out of uncontrollable situations with equal amounts of sheer dumb luck. And it’s a hoot each and every time. Longoria and Thornton have barely any screen time as the catalysts to this adventure—a worried mother figure and sardonic slime-ball that can’t find good help respectively. Michael Rapaport has a quick bit of levity; Braugher shines with self-righteous Southern hospitality; and Wesley tries his hardest to shake the youthful features allowing him to pass for a seventeen-year old in The Vampire Diaries and not a seasoned government official here. Throw in Zoe Bell, Brea Grant, and Serinda Swan as escort assassins; a group of black killers on a van/boat named the Nubian Princess; and a Native American hit squad and you understand why the Oogies have such fun archaically killing in the name of America. Natalie Martinez‘s illegal with nursing skills serves as the one chance these rednecks have at redemption from bigotry.

They’re all a bunch of insane caricatures hitting the road to reclaim a helpless boy and his trust fund, each a disposable hiccup for the Oogies as they manage to survive despite themselves. Brodie-Sangster effectively provides an endearingly damaged soul for the brothers to rally around, never letting his handicapped Rob fall into parody as Crawford, Fimmel, and Cudmore steal the show. This trio has awesome chemistry, flippantly absurd banter, and smarm to spare in performances coupling with a script that never takes itself too seriously to make The Baytown Outlaws a treat most would dismiss sight unseen. I know I would have. Battles’ formula of violence, comedy, sex appeal, and gunplay succeeds with a cast having as much fun as we are. Hopefully he’ll only improve from here.

The Baytown Outlaws is currently on VOD and will hit limited release on Friday, January 11th in New York City.