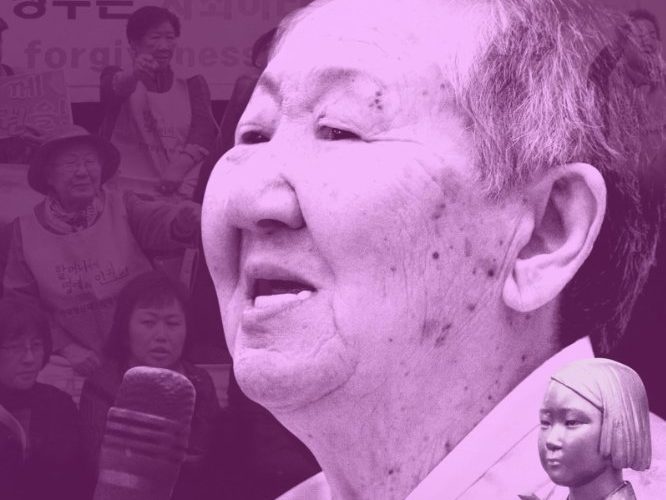 Review: ‘The Apology’ is an Enraging and Sorrowful Documentary

Grandma Gil from South Korea, Grandma Cao from China, and Grandma Adela from the Philippines are just three of the 200,000 women who found themselves kidnapped and forced into sexual slavery by the Imperial Japanese Army during World War II. Taken from their homes in their early teenage years, the girls who managed to survive the ordeal eventually returned home after the war, forced to live in silence with unspeakable memories. Some of the women never told anyone what happened, living in shame of revealing the truth. Decades later, as their health fades, the Grandmas remain driven spokespersons for the movement for an apology from the Japanese government.

The Apology is a heartbreaking documentary which details this quest for justice, a message which far too often falls on deaf ears. The Japanese government classified these young girls, these children, as ‘comfort women.’ Early on, Osaka Mayor Toru Hashimot issues a statement, deeming the use of these children as comfort women “necessary.” In these painful moments, the Grandmas never react in anger, ever optimistic that victory is just a little bit further away.

Director Tiffany Hsiung catches these moments of defeat through the Grandmas’ eyes, allowing these wounding moments to painfully resonate. Like the stylistic antithesis of Joshua Oppenheimer’s The Act of Killing, Hsiung’s camera retains a stark, journalistic aesthetic, only briefly flirting with a cinematic feel when composer Lesley Barber’s strings swell on the soundtrack. While Barber’s score more often than not works, her choices occasionally border on the generic feel of royalty-free music.

Every Wednesday since 1992, the Grandmas protest outside the Japanese embassy. It’s remarkable to witness these three elderly women carrying the weight of a political movement on their backs. Still spry and alert, the women chop wood, cook and live mostly independent lives. The venomous anti-protesters are almost entirely upper-class Japanese males, hurling sexist slurs at the women as they enter and exit hotels. Only one female anti-protester appears in the film. Meanwhile, the Grandmas visit Japanese high schools, telling their stories, which reduce many students to tears.

Not without moments of levity, Hsiung pays careful attention to the daily minutia of these women’s lives. Finding strength in their supportive families, the Grandmas maintain active lives, despite their dwindling hearing and eye-sight. It’s tricky to weave a narrative around the episodic series of protests and the inevitable flights in between, detailing the Grandmas’ struggles to keep their stories alive. At times, the women voice concerns that they might not all be around for the next protest, as their health slowly deteriorates. Perhaps the Japanese government have this very notion in mind, hoping the movement will die with the Grandmas.

Alternately enraging and sorrowful, Hsiung’s film sheds much needed light on a powerful and deeply important story of injustice. All requests for apology are roundly refused by the Japanese government until 2015 when they finally issued an apology to South Korea for its use of comfort women during the war, but failed to include any other countries in the statement. This troubling development is understandably absent from the film, which instead concludes in 2014, with the Grandmas delivering a lengthy petition, bearing thousands of signatures, to the United Nations. The film’s title underlines the lack of catharsis, highlighting the absence of an appropriate apology or reparations.

At one point, Grandma Gil’s daughter asks her why she doesn’t cry, always fighting to withhold her tears, as she relives these terrible memories. Grandma Gil simply laughs and looks away from the camera. We never hear her answer, and frankly, we don’t need to. We feel it.

The Apology screens at the Human Right Watch Film Festival.