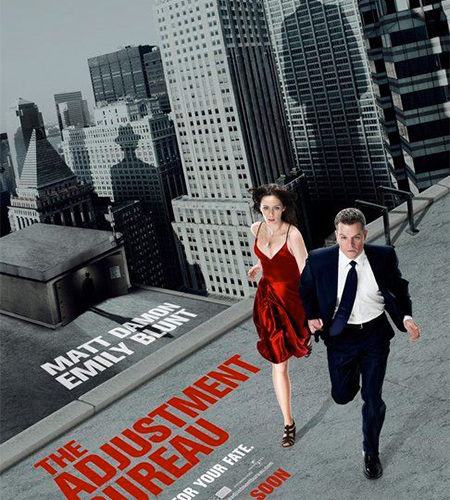 The Adjustment Bureau is the most frustrating breed of decent films, one with a tremendous amount of potential and an abundant lack of execution. With such reliable leads and a unique concept, it’s infuriating to try and understand how this would-be meaty sci-fi film turned into what’s ultimately a watchable but remarkably uninspiring film.

There must have once been a script that took full advantage of this gem of an idea (based on the Philip K. Dick short story “The Adjustment Team”), especially considering the fact it’s from George Nolfi, who established himself as a writer capable of building both clever narratives and characters in both The Bourne Ultimatum and the vastly-underrated Ocean’s Twelve. With those two films in mind, it must be asked why this film plays it so safe. Whenever Nolfi flirts with an interesting idea here, he quickly leaves it behind. Whenever the film starts to go into the gray area of the morals and ethics of this concept, he merely asks obvious questions.

Where’s the ambition? Great science-fiction raises questions about humanity; this brushes over them. All the heart the film seems to be striving for ends up turning into pure sappiness by the end, after feeling rather convincing through the first half. Matt Damon and Emily Blunt play off each other so well they almost make you forget the film’s prominent flaws. The charismatic stars sell the cookie-cutter romance for as long as they can, but eventually everything else falls apart around them.

“The Adjustment Bureau,” the society that controls the world – the same men trying to keep Blunt and Damon apart – get their powers from their hats. Yes, magical fedora hats. The fact that this is played without any sense of irony or self-acknowledgment makes one question whether or not the film knows how goofy it is. The worst of its goofiness? The shoddy exposition throughout. It seems as if every 20 minutes there’s a five-minute pit stop where a bored-looking Anthony Mackie pops up to explain everything. Unlike Inception, none of these over-driven explanatory moments are delivered with any sense of energy, interest or wonder.

Wonder is what The Adjustment Bureau is severely lacking. Perhaps if the film took a daring leap at the end, Nolfi could have redeemed this love story in its final gasping minutes. If it weren’t for Damon and Blunt’s chemistry, some nice stylistic choices and John Slattery‘s performance as Richardson – the scene stealing comic relief that completely disappears in the third act – Nolfi’s directorial debut would be completely forgettable. The Adjustment Bureau gets out of the gate well, stalls through the second act and finally hits a major roadblock by the end that quickly turns the film into a softball version of Dark City.