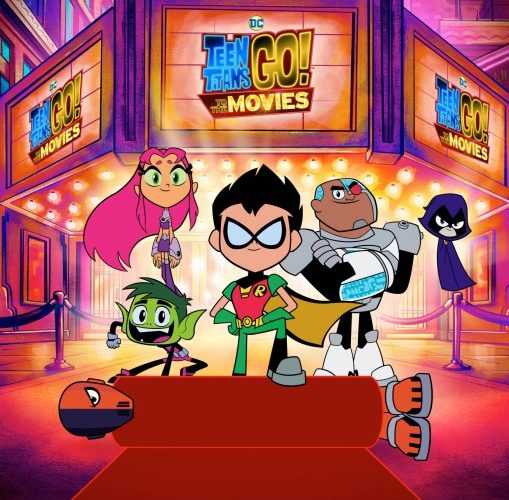 Review: ‘Teen Titans Go! To the Movies’ is a Meta Animation Strictly for Kids

Picture this: a popular 1980s comic by Marv Wolfman and George Pérez called The New Teen Titans puts a bunch of sidekicks together to fight one of their rank’s evil father. After a sixteen-year run come new titles to continue the legacy in print with differing line-ups before Cartoon Network developed the property into a television series from Glen Murakami entitled Teen Titans. This thing becomes a huge winner for CN with rabid fans and critical acclaim before moving past a planned four-season arc into a fifth with the feature Teen Titans: Trouble in Tokyo serving as a finale. Did WB cancel it? Did Cartoon Network? Was it a matter of Bandai owning toy rights for the show despite Mattel signing exclusivity with the station? Who knows?

Some say the end was the product of the cartoon doing too well with young girls — something logic would call a good thing and thus proves marketing and merchandising doesn’t deal in logic. In that scenario executives lose sight of big picture profits and see only aberrations (“girls don’t buy toys”) or worry storylines aren’t young enough to capitalize on wider wallets for screaming pre-teens. This then leads to an experiment of super-stylized cartoon deformities unbeholden to physics, intelligence, or maturity known as “New Teen Titans” with a series of shorts proving so popular in their comic retooling that Teen Titans Go! was born with all the same voice-actors from its more serious precursor. Goofy took over with easy guffaws to condition audiences early into loving DC heroes. After show creators Aaron Horvath and Michael Jelenic spent five years watching their “lighter” Teen Titans excel in primetime, Robin (Scott Menville) and his crew of Raven (Tara Strong), Starfire (Hynden Walch), Beast Boy (Greg Cipes), and Cyborg (Khary Payton) have finally found their names in big-time Hollywood lights with Teen Titans Go! To the Movies. This meta showcase follows the youngsters’ attempts to grant their leader’s wish of being in a movie because he deserves the same notoriety as Batman after accomplishing all that he has since donning the mask by his side. But when the latest film in the current era of superhero blockbuster box office rejuvenation (spearheaded by Kristen Bell’s director Jade Wilson) premieres without the Titans earning any invites alongside their peers, it stings.

What can they do to shake the perception of them being the joke of the hero world? You’d be correct to say, “Nothing” because they literally epitomize that label whether wittingly or not. But Horvath and co-director Peter Rida Michail need something resembling a plot to fill their runtime, so the Titans will have to at least go through the motions of winning some respect. I’m not certain travelling back in time to prevent every big-name star from experiencing his/her origin is the best or most efficient way to do it, but the rapid-fire attempt is (darkly) funny nonetheless (especially when you think about how preventing Bruce Wayne from becoming Batman means saving his parents and inevitably fixing that error means ensuring their brutally violent murders). The less absurd way is to acquire a nemesis who hates them so much that he/she will risk failure in whatever dastardly plan he/she’s cooked up by splitting focus onto beating them too. They hope that Slade (Will Arnett — yes it’s weird since the studio has done everything possible to make his voice synonymous with LEGO Batman) can fit the bill if for no other reason than he’s the villain currently trying to steal something from Jump City. It won’t be easy to defeat him, though, because he’s a master of “psychological manipulation.” Well it should be easy since his handle on that power is about as good as Arnett’s Gob Bluth’s handle on magic. But that’s part of the charm … or stupidity depending on your mood.

I won’t lie: my grasp on the whole was definitely leaning towards stupidity for the majority of Teen Titans‘ duration. This is next-level potty humor with poop jokes coming so often that it’s humanly impossible to continue rolling your eyes throughout. But while the lazy humor can be grating for mature buzz-kills like me, the audience in my theater was eating it up and going in for seconds. I’m talking kids and parents alike, each rejoicing in the act of everyone onscreen dropping a number two in a prop toilet for three minutes straight. The comedy is so broadly bottom barrel that you have to be eight (at heart) to truly enjoy yourself and Horvath and Michail excel at tickling that target’s funny bone from start to finish. If you don’t know where things are going after the first twenty minutes you either aren’t versed in DC character names or you’re completely oblivious. Again, though, that isn’t necessarily bad or unintentional. This film leans hard into its irreverence, knowingly sacrificing mystery and twists for foolproof laughs. There are Easter eggs to discover in the background (the punny movie posters are cute and I saw a Katana doll on the floor amongst other things), but that’s about as “deep” as things get. The rest is stuff like Nicolas Cage’s Superman saying “explosive diarrhea” (his son Kal-El is credited as young Batman) and the Titans rapping about who they are and what they do twice. It’s the type of repetitive programming necessary to hook thousands of new addicts.

And when their last jab at Marvel (Stan Lee, Guardians of the Galaxy, and Deadpool get lambasted with noticeable love) is post-credits text in the vein of “Teen Titans will return on Cartoon Network,” you officially fall through the rabbit hole of capitalistic intent. Young Justice fans will probably see jokes at its expense as salt in the wound, but original Teen Titans die-hards receive a surprise mid-credits sign of hope (or knife in the back). As for Teen Titans Go! consumers, this is surely everything you wanted for better or worse. Since I just kept waiting for Cyborg to joke about already being in a movie (he doesn’t), I’m obviously not one. The kids surrounding me loved every second, though. I guess that’s all that really matters.

Teen Titans Go! To the Movies opens in wide release on Friday, July 27.