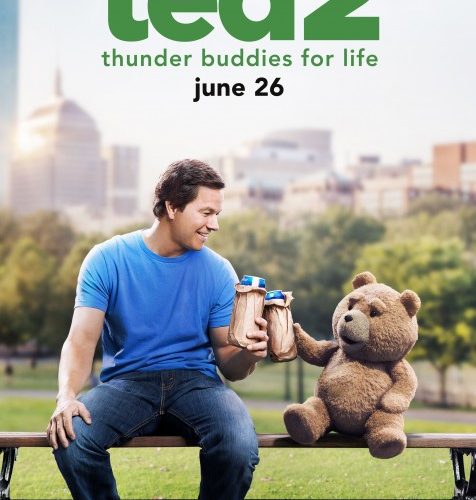 Something Steve Harvey said on a recent episode of Comedians in Cars Getting Coffee really struck me: “Tragedy strikes. I got news for you—we have the jokes that night. We know that we can’t bring this to the public yet cause we’ll get hammered. But in a room alone, when it’s just us, we have the jokes already ready.” He’s right. If the joke is funny—no matter what the circumstance is—it’s funny. Your finding it offense or “too-soon” isn’t a comment on the joke itself, but on your sense of humor. Comedy heals wounds and oftentimes going “too far” is exactly what we need. South Park does this perfectly and Seth MacFarlane‘s Family Guy is a close second. Their mixture of irreverence, pop culture, and timely barbs has proven very lucrative as a result.

It doesn’t always work—see the abysmal A Million Ways to Die in the West—but MacFarlane did successfully move his formula to live action in 2012 with Ted. I won’t lie, it helps having the absurdity of a talking teddy bear that curses, screws, and does drugs to let your defenses down and laugh. His secret weapon was never glossing over that absurdity. Ted (MacFarlane) being sentient legitimately freaked people out before becoming a flash-in-the-pan curio like today’s reality TV stars. Then the world stopped caring. It’s the perfect set-up for Ted 2‘s expansion into civil rights satire because, like most things, public interest returns in force once it notices a supposed “inferior” calling itself an equal. The question remained, however, whether MacFarlane would focus his sequel on this theme or forget about it halfway through.

He more or less does the latter, which hurts the film cinematically as the whole devolves into an over-long “Family Guy” episode chock full of random asides, weird cameos, and goofy homage. The opening credit sequence is pretty much a rip-off of MacFarlane’s cartoon as well. He has to do this, though, because the focus is no longer on Ted’s thunder buddy John Bennett (Mark Wahlberg) like the original. We’re made to relate to the bear this time rather than let him be the comic relief sidekick. This is tough because Ted doing human things is inherently funny. Watching he and new wife Tami-Lynn (Jessica Barth) quarrel while he’s wearing a dirty white undershirt (part of the gag since he doesn’t normally wear clothes) isn’t about propelling the plot forward—it’s purely for the joke.

While this means the sequel is a shadow of its predecessor—going so far as reusing the exact same 180-degree plot turn into kidnapping at the hands of Giovanni Ribisi‘s delightfully creepy Donny—it also means it has the room to be funnier to compensate. This gets me back to what Harvey said above because MacFarlane and co-writers Alec Sulkin and Wellesley Wild do what I had hoped the former would have done while hosting the Oscars. They make sure nothing is off-limits and go from timely Deflategate oneliners to unabashedly revolving a memorable aside at an improv performance around horrific tragedies like 9/11 and Charlie Hebdo with a little Bill Cosby thrown in. Oh, and if any of you went to Arizona State, either come with a sense of humor or stay home.

Apples are thrown at joggers from a rooftop for a punch-line, a famous celebrity unsettlingly buys a box of Trix, and New York Comic Con arrives for its relevance to a minor subplot as well as to cash in on Patrick Warburton and Michael Dorn‘s casting. Irreverence is the name of the game and ultimately renders the main crux about whether or not Ted is a person moot. The court case is merely exposition for more jokes, to make Ted crestfallen, and to get Amanda Seyfried‘s newbie lawyer Samantha and Wahlberg’s John together after the latter’s divorce to Mila Kunis‘ absent Lori. Marijuana plays a much larger role, Sam J. Jones‘ Flash persona fits in even better than before, and guys like Tom Brady and Jay Leno show they aren’t above being laughed at.

With Ted’s citizenship status all but window dressing, the success of Ted 2 comes down to your personal taste. Low expectations help, but an enjoyment of the first is definitely a prerequisite. After all, both films are just two potheads from Boston dicking around and watching life pass by their maturity level despite them going through the motions to catch up. Some jokes go on for too long even when they weren’t that funny to begin with (Seyfried not know iconic pop culture references) and MacFarlane’s decision to be more “cinematic” with montages and slomos cause the runtime to drag, but there are enough smiles to get you through two separate court cases bookending the Comic Con mini movie adventure. That sounds disjointed because it is, but like “Family Guy” the laughs are connective tissue enough.

I also have to give MacFarlane credit for two well-placed callbacks to Ted. This kind of stuff is in his wheelhouse and he should stick to it. I had hoped he might be able to branch out after Ted took a leap away from random skits loosely made into a plot, but A Million Ways to Die showed how his existing in a middle ground between sketch comedy and feature film comedy is a bad move. Ted 2 has a built in audience so his skewing closer to the former can be forgiven since he doesn’t have to waste time with exposition meant to bring people in. You’ve either embraced the idiocy already or not. We’ve returned to watch these screw-ups screw-up because it is a necessary escape sprinkled with biting commentary and a fearless disregard for taboo.