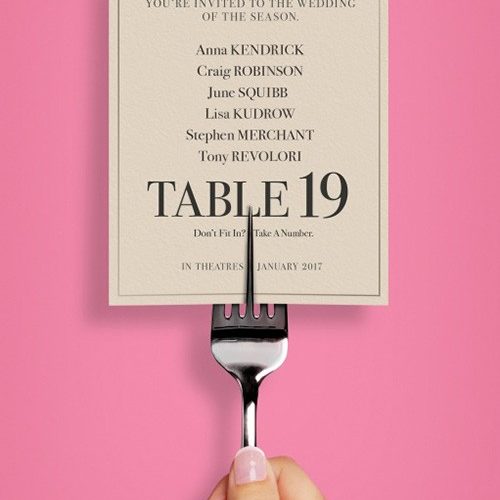 Review: ‘Table 19’ is a Tired and Cheap Comedy

The concept behind Table 19 is compelling enough — what happens over the course of a wedding reception at the guest table that’s made up of social pariahs and “didn’t think they’d actually say ‘yes’” attendees? Table 19 takes us into a world of outsiders, and if the outcasts aren’t the most interesting people at a wedding, then I don’t know who is. Yes, I’m being serious.

Ex-maid of honor Eloise (Anna Kendrick) is Table 19’s lead, both in the film and at the table. Having previously dated the bride’s brother, Teddy (Wyatt Russell), she’s intimately acquainted with the seating arrangements of the wedding and lets the rest of the table know almost immediately that they are the “randoms” of the night — or, as the bride’s mother so aptly puts it, “the table that should have known to send ‘regrets’ but not before sending something nice off the registry.” A married couple that casually knows the bride’s father through the diner business (Lisa Kudrow and Craig Robinson), the bride’s jailed cousin (Stephen Merchant), the bride’s first nanny (June Squibb), and a sex-crazed high-schooler (Tony Revolori) who gets dating advice from his mother make up the rest of table 19, setting the stage for what should be an entertaining comedy.

Unfortunately, instead of sticking with intelligent humor and relying on the all-star cast to garner laughs from the audience, Table 19 takes the easy way out, interjecting moments of unwarranted slapstick comedy, clichéd lines, and booze-fueled interactions that feel tired and cheap. Kudrow and Merchant are the film’s two saving graces, and the funniest moments revolve around the fact that they can each be seen wearing the same wardrobe selection as the wedding’s catering service. Unfortunately, it’s not enough to keep things afloat.

To further dramatize the story, the viewer learns early on that Eloise is pregnant with Teddy’s baby, locking Table 19 into the dreaded rom-com genre. However, even when accepting the film’s terms, it seems the story still doesn’t do much to demonstrate any development in the romance department, instead banking on a cringe-worthy hallway exchange between Eloise and Teddy to untangle any and all miscommunications regarding their prior breakup. Simply put, the scene is dull and lacks any sort of cinematic merit.

While most of Table 19 is a flop, director Jeffrey Blitz does sometimes graze the surface of what could have been an outside-the-norm approach. Squibb’s storyline of the forgotten nanny who now lives alone with a dog is thoughtful and her performance spot on, while Kudrow and Robinson’s marital problems also shed new light on the all-too-relatable tragedy of a love that loses its flame. Additionally, early on in the film Eloise finds herself falling for a wedding crasher who turns out to be the groom in another ceremony happening at the same hotel. While this twist has a sincere sense of humanity, Blitz doesn’t stick with it long or pursue it much past a dance between the two, abandoning the potential for a engaging turn of plot and excavation of the human spirit’s struggle with social pressures.

Instead, expect the usual. You’ll get a few laughs out of Table 19, but chances are that you’ll spend most of the film rolling your eyes and wishing it lived up to its varied cast.

Table 19 is now in limited release.