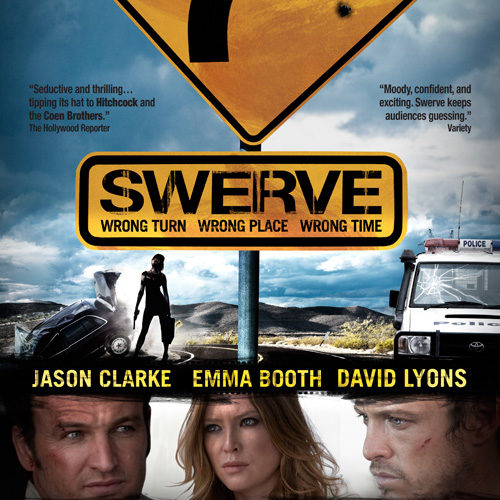 After a long journey dating back to 2010, director Craig Lahiff finally has his Australian crime thriller Swerve arriving in American theaters. It took a year to complete before debuting at the Melbourne International Film Festival, another until hitting multiplexes in its native country, and one more to piggyback on third lead Jason Clarke’s rising star here. Similar to many of its ilk you’ve probably seen before, the work itself isn’t too bad if you allow yourself to enjoy the ride from its opening, fateful collision of three very disparate characters. Comparisons to early Coen Brothers is hyperbolic, but I can understand why one would come to such a conclusion. Its dark noir is deliberately paced with stoic villains and secretively duplicitous heroes, growing bleaker as the minutes go by until circumstances become more important than actions. Bookended in a way that makes everything in the middle little more than an inconsequential series of horrible events blindly driven by greed and lust, its epilogue can’t help but elicit a knowing smile. The introduction of a dangerous drug world element pits an abusive cop (Clarke’s Frank), his adulterous wife (Emma Booth’s Jina), and the moral stranger who has the distinct misfortune of crossing their paths (David Lyons’ Colin) against one another as much as the cold as ice heavy (Travis McMahon’s Charlie) tracking them for the money he knows one of them possesses. It becomes the catalyst that allows their short fuses and complete distrust in each other to get the better of common sense; to make plans on the fly that put them at odds with those they had hoped to share the spoils.

It’s money taken by an unknown criminal (Robert Mammone) in exchange for a briefcase of fake cocaine he blows up after the transaction before his careless rush to a Neverest hotel rendezvous ends with his decapitation and the cash in Sheriff Frank’s hands. It’s an event embodied by the title verb as our late driver passes Colin en route to a job interview before swerving out of a fleeing Jina’s way to his death. Colin’s Good Samaritan checks on both to discover him beyond help and her in need of a ride home. An Iraq war veteran with a heart of gold, he drops her off and heads to town to give his statement and turn over the cash. Frank thanks him, offers a bed for the night, and brings him home to find Jina waiting with dinner. The money’s is the MacGuffin driving these characters together by providing the means for them to turn on each other once assumptions best sound reasoning. As an example, when Charlie knocks Frank unconscious while searching his home, it’s Jina and Colin he focuses his anger on when awakening because they’re at his side. Colin therefore can’t help but get embroiled in this crazy adventure despite merely trying to do the right thing at every turn. His guilt in leaving Jina alone with a killer and a homicidal husband on the loose proves stronger than that of letting everyone suffer I return for her safety. So he stays despite her constantly readying to give him the slip first chance she gets because while it seems impossible, escape from Neverest is all any of them can hope for.

Lahiff convolutes things by letting his story spiral out of control, but the actors thankfully seem to be having enough fun with their roles to keep it from completely derailing. Side players like Jina’s smarmy boss Sam (Vince Colosimo) come in with little purpose other than distraction and a backstory about her and Frank’s history leading to her leaving him adds a mystery that tries too hard to drive a wedge between she and their new guest. In all honesty, Colin doesn’t need more mysterious half-truths to understand he’s lost without a paddle and surrounded by sharks playing him at every turn. Watching Frank use him to get under Jina’s skin during that initial dinner and then her stripping naked in front of Colin at the pool to return the favor is evidence enough. The excess does help pad the runtime to a reach 86-minutes and the gang’s climactic final meet-up aboard a moving train, though. Again: if you can grin and bear the fact something always comes up to replace the previous problem just solved, there is entertainment to be had. Booth is as sexy a femme fatale as Clarke is temperamental aggressor while McMahon adds a nice infusion of calm, collected killer to contrast their highly emotive maneuvers. And Lyons’ Colin is similar to his ill-fated show The Cape titular vigilante but with a tinge more humanity courtesy of his morally centered hero having a more conflicted notion of his role as hero. We’re so used to watching bad things happen to bad people in Hollywood that seeing his “correct” decision cause his suffering is a welcome change.

Swerve‘s suspense drama feels long in the tooth despite its brevity because Lahiff pumps it to the brim with circumstances that can’t quite provide the depth it seems he hopes they can. Thankfully a decent strain of humor also runs throughout to render each situation more enjoyable than tedious. One could say everyone but Colin is a villain he faces off against before the film’s knowing wink of a conclusion and that’s not a bad reality. He enters their sleepy town figuring he’s helping to expose what looks like a pretty destructive element closely outside its borders and instead finds himself trapped in an amoral hunting ground of self-interest and greed. After watching him fall pray to his generosity, it’s hard not to wonder whether being the white hat isn’t quite the karmic cleanser after all.