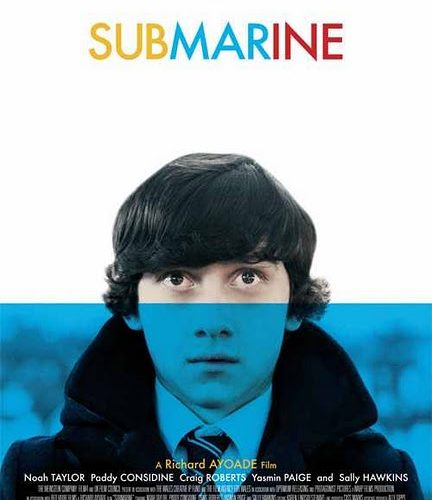 After a successful tour on the film fest circuit, where it garnered much love and critical praise, Richard Ayoade’s directorial debut Submarine is finally opening in theaters in the United States. And with all the festival buzz that surrounds it, I was eager to see what this quirky coming-of-age tale had in store. What I found was a pastiche largely constructed of allusions to a number of iconic features, which made for plenty of style, but little substance.

Submarine centers on Oliver Tate (Craig Roberts) an articulate but immature 15-year-old who deeply believes he knows better than everyone around him. In an early display of his inflated self-worth, Oliver fantasizes about the inevitable mass mourning his demise would bring on across the entire nation of Wales. It’s with this kind of self-centered assurance that he faces the world, a mixture of the self-aggrandizing hubris of Rushmore’s Max Fischer and the morbid but romantic longing of Harold and Maude’s eponymous young hero. Fitting then that the object of his affections is a mash-up of movie allusions in her own right. Yes, the Maude to his Harold is a charming pyromaniac named Jordana Bevan (an otherworldly and compelling Yasmin Paige), who has Amelie’s haircut, Lolita’s heart-shaped sunglasses and the self-destructive streak common to heroes of the French New Wave. Jordana is a bad girl, so Oliver puts his principles aside so as not to impede what he deems “progress.” What this boils down to is picking on the fat girl at school to the point where she transfers to escape him. While temporarily guilt-ridden over this, Oliver quickly forgets the whole incident when Jordana shows an interest in him. After an awkward bit of blackmail and some school yard heroics, the two are a couple, and Oliver begins to push for sex – thanks to the constant egging on of his pimpled peers. But there’s more to Oliver’s arc than discarding his V card, and soon a secondary plot unfurls about his parents’ crumbling marriage.

A constant sneak, snoop and snitch on his parents’ privacy, Oliver begins to suspect his mother (Sally Hawkins) is considering an affair with her an old boyfriend, Graham (Paddy Considine), a karate-chopping spiritualist with an oddball haircut and psychic shtick straight out of Napoleon Dynamite. From here, Oliver doggedly pesters his mother and father about the state of their marriage, in hopes of maintaining the status quo  – which is not that great but at least they’re not divorced, right? When he attempts to approach his seemingly cynical girlfriend about his parental concerns, to his surprise she opens up with one of her own: her mother is dying of cancer. Feeling trumped, Oliver begrudgingly keeps his concerns to himself and half-heartedly listens to his girlfriend pour her heart out. He feigns concern for her, but can’t bring himself to care for anything other than his own sense of safety and stability. He wants his parents together – no matter how unhappy they may be. He wants Jordana as his girlfriend – but doesn’t want to be bogged down by her troubles. By act three his selfishness becomes grating and contemptible as he recklessly runs around trying to put out the fires his actions (or inaction) has wrought. While the first hour was fun, jaunty and full of cool film references, the second half devolves into an aimless apology for all of Oliver’s faults that never quite achieves sincerity. At the film’s conclusion, a smattering of loose ends are left carelessly dangling and it seems nearly every other character around him has grown more than he. Yet Oliver is still awarded his romantic New Wave finale, in the film’s final frustrating turn.

Still, for all its faults, it’s easy to see why some have taken to Submarine so wholeheartedly. Its cinematography is warm, clever, artful and charming. For film fans, it’s a joy to pull out the references that skitter by or linger. There are plenty of quotable quips, enviable fashions and even some curious character work. Sure, it’s cluttered but it’s also stylish and romantic with a colorful sense of nostalgia! I too was enchanted by these sparkling elements. However, beneath Submarine‘s chic and glossy surface, there is little depth. The story races then rambles, and the film’s hero like Submarine itself proves ultimately shallow and rudderless.