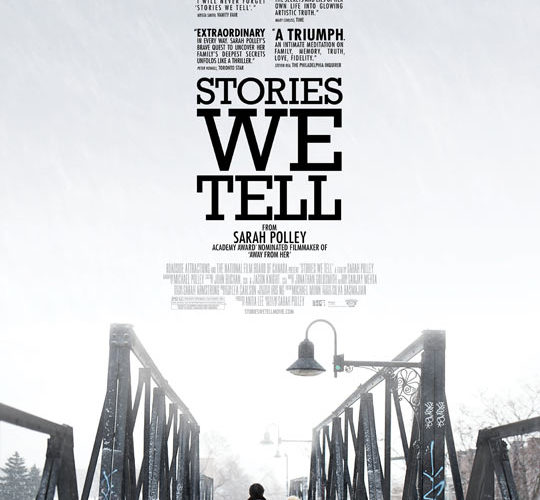 Sarah Polley‘s Stories We Tell is an exquisite, elegant rebuke to the standards that define so many of our most popular filmic narratives: three-act structures that begin with an inciting incident and move, breathlessly, to a cathartic climax; a lovable protagonist with an easily graspable character arc; endings that confirm the universe as a place in which change is possible, where people react to conflict and tragedy by altering their lives significantly and not by simply living through the pain, repressing it to maintain the consistency of their daily routines. What’s remarkable about this is that Stories We Tell is a nonfiction film, and yet it says more about the art and practice of narrative than any film I’ve seen so far this year. The film doesn’t reckon with the field of documentary on a visceral level — like, say, Lucien Castaing-Taylor and Verena Paravel‘s stunning Leviathan — but rather does so thematically and structurally, shuffling through historical details and character perspectives to arrive at a place where empirical truth is impossible, even foolhardy.

Five years in the making (kudos to editor Mike Munn for balancing all that footage), Stories We Tell, at its point of inception, was something of an uncertainty for Polley: she knew she wanted to make it, but she didn’t know what shape it was eventually going to take. This works in the film’s favor, because her investigation of the truth — which naturally leads her, in the vein of Rashomon, to interviewing others to learn about their individual investigations of the truth — becomes the very subject of Stories We Tell. The film is about the curving, labyrinthe nature of what it means to look into one’s family history and wonder exactly what happened at a given point in history. Inevitably, too, the film becomes an illustration of the effect of time: how it can warp our memories, transforming original events into things that can only be marginally understood. Because this is a fact of life that never ceases — even experiences we had just yesterday are dimmed by temporal separation — Polley’s film inquires about the possibility of embracing a truth that isn’t literal, one that eludes scientific, rigorous perception in favor of emotional veracity. But even this is borderline: as satisfying as Stories We Tell is, it doesn’t trick us into thinking it holds any answers. The opening minutes of Stories We Tell cagily promise a much less complicated film than these interpretations would suggest. With Bon Iver‘s “Skinny Love” playing on the soundtrack, the film shows Polley preparing her family — mostly her sisters and brothers, some of them half-siblings — for one-on-one interviews. Polley creates an intimate sense of humor from the start, openly admitting to her subjects that she really has no idea where this documentary is going, or what her true intentions are. (This confusion is countered in a parallel moment later in the film, when one of her brothers asks her what the film is about, and she comes up with a more legible, purposeful response.) Polley clearly sets up her father, Michael, as a key presence in these early stages: in addition to the standard talking-head set-up, Polley brings her father to a recording studio, where she has him recite a letter he wrote detailing the family’s past experiences. Michael, himself a trained actor (before becoming a 9-to-5 guy to support his family), has a beautiful, classy intonation, and the way Polley uses his letter as a recurrent voice-over gives the film a compassionate through-line. We occasionally get glimpses of Polley herself, listening from a booth, separated from her father by a pane of glass. Every so often, she musters the directorial courage to ask her father to go over a line a second time.

The focus of Polley’s beginning conversations with her family is her mother, Diane, who passed away when Sarah was only eleven. (It’s a compelling reality of the film that Diane, the most debated character, isn’t around to tell her story.) A spirited, infectious woman, most everybody in the family describes Diane as a larger-than-life figure, someone who was always working and playing at the same time, advancing her acting career without sacrificing her gift for socializing and lighting up a room. Diane met Michael when they acted in a play together, and the two soon fell in love, though it didn’t take long for Diane to realize that Michael was a very different artist than her. As introverted as she was extroverted, Michael was a lonesome figure, a quiet romantic who liked (and still likes) to sit alone with a cigarette and read a book. (A delightful, hysterical interlude shows the present-day Michael conversing with a fly crawling across his window — this is a regular activity for him, apparently.) Diane found herself disappointed with the way Michael shelved his acting career after they started having children. This, along with their combative, antithetical personalities, created a wound in their relationship that never quite healed. This is one of the film’s toughest realizations: that love can disappear as swiftly as it develops. Stories We Tell is rich with home-video footage, but it takes a few minutes to conclude that only brief portions aren’t fabrications: for the most part, the cinematic counterparts Polley gives to her subjects’ testimonies are seductively rendered recreations. Informed with nostalgic, evocative life by cinematographer Iris Ng‘s Super 8 footage, these samplings of the past enlist a cast of actors — Rebecca Jenkins as Diane, Peter Evans as Michael, and several more — to inhabit the story’s characters, giving visual essence to the people that are being discussed and debated so amply. There are scenes of Diane’s fateful trip to Montreal, where she played a part in a so-so play about the casting process, and, more importantly, developed a passionate rapport with a erudite film producer. Polley uses this refined aesthetic gambit again on more contemporary scenes, including a life-changing coffee-house conversation where we instantly recognize the all-grown-up Sarah Polley we’ve seen elsewhere in the film. The Super 8 ploy carries inherent thematic relevance, further underlining the film’s idea that the past is always a presence in a room, intensely felt even when it isn’t spoken about. But it’s impressive even on a superficial level, complementing the typical-looking interview footage with a refreshing, elevating pictorial finesse.

Stories We Tell confirms Sarah Polley as a versatile writer-director of pertinent interest. Think of the two features she’s made previously: the sublime Away from Her, starring Julie Christie and Gordon Pinsent as a married couple plagued by Alzheimer’s; and Take This Waltz, the most frustrating, intriguing mixed-bag I saw in 2012, about another married couple (Michelle Williams and Seth Rogen) plagued by an outside force, this time in the form of a handsome rickshaw driver (Luke Kirby). Stories We Tell is also a film about marriage: part of its singularity is that the story of Michael and Diane, even without Polley’s directorial hand, is a classic, beguiling family mystery, packed with twists, surprises, ellipses, and revelations. On paper, the nonfiction Stories We Tell sounds like an intentional departure from Polley’s first two films, but the more you consider it, the more clearly it becomes a product of her mind, shaped by her searching interests and touches. The movie takes its opening cue from a Margaret Atwood quotation: “When you are in the middle of a story it isn’t a story at all, but only a confusion; a dark roaring, a blindness.” The hushed, sneaky audacity of Stories We Tell lies in the fact that Polley doesn’t allow us to leave that blindness: even at the end, when it seems like the answers are there, we’re still compromised by time, memory, and perspective.

Stories We Tell hits theaters on May 10th.