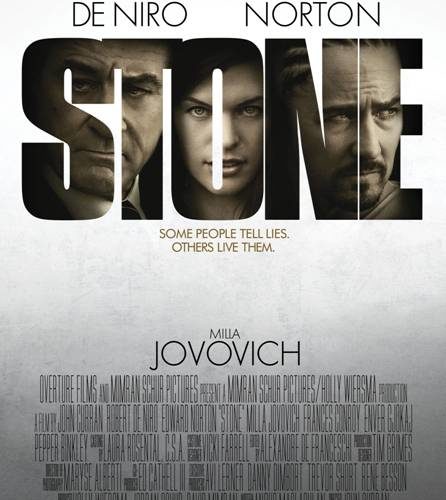 Robert De Niro in a good film? And he delivers an exceptional performance, too? It’s been far too long for one to say that and it couldn’t be more satisfying to admit. Stone may not live up to its lofty ambitions and fails more than a few times, but director John Curran’s followup to the excellent A Painted Veil is a worthwhile experiment that ultimately ends up working.

Stone could have been a goofy, over-the-top drama without much of a push. Fortunately, that’s not the case. The story has three central main characters: Jack (Robert De Niro), Stone (Edward Norton) and Lucetta (Milla Jovovich). Stone is a prisoner seeking parol and Jack is the patrol officer working on his case. Their meetings are dances of dialogue; these are the true battles of the film. To help insure that Stone gets released, his persistent and narcissistic girl-on-the-outside, Lucetta, gets involved with Jack more than she should; it becomes a love triangle in the most unconventional way possible. During this affair Stone is rehabilitating himself and turning to God, like most cliched prisoners. The resolution or climax you’d expect from a prisoner versus the system tripe doesn’t come along the way you’d expect, similar to how the film sidesteps plenty of well-known tropes.

What’s bizarre about Stone is how much its mood fluctuates every five minutes. One scene is played with an admirable amount of subtlety while the next is unbearably heavy-handed. When it loses sight of its power of unsaid moments, it gets tedious. It shifts throughout, going from subtle to didactic in the blink of an eye.

Gone, though, is De Niro’s comedic frowning, his dry wit and every other bit of comedy he’s been stuck into the past few years. He’s both subtle and restrained here, a wonderful side of the veteran we haven’t seen in years. The idea of De Niro playing Jack is almost meta in a way. Underneath this calm and religious man is a violent and tortured one, reminiscent of numerous of his on-screen personas.

Jack and Stone make the perfect counterpoints. Stone isn’t at all what he appears to be; underneath his off putting-persona and mannerisms is someone less dangerous than you’d imagine, but he has violence in him, just like Jack. Curran examines two different types of anger and violence facing off. There’s no clear villain between the two.

Curran’s unconventional dialog driven feature may not live up to its fullest potential, but what Curran and co. have crafted deserves admiration. Its more overwrought moments may be groan inducing at times, but when the film is successful, Stone is a strong and unique drama with three notable performances deserving of recognition.